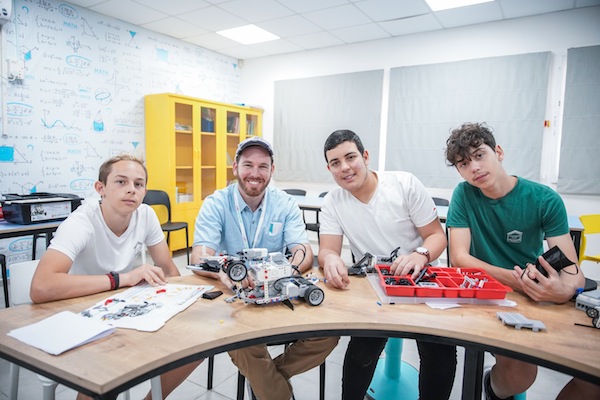 As a town with one of the highest percentages of new immigrants in Israel, Kiryat Yam is welcoming many refugees from Ukraine. One of the most important elements of helping these families process their trauma and settle is ensuring that their children’s education resumes.

Kiryat Yam’s low socioeconomic index means that local students face more academic challenges in comparison to their counterparts in the centre of Israel. But it’s here that kindergarten children are being taught how to build and even program simple robots, enabling them to gain rudimentary familiarity with technology in preparation for studying STEAM (science, tech, engineering, art, math) subjects in the future.

“Through our robotics programs in kindergartens, and continuing at the D. Dan and Betty Kahn STEAM Centre at the Rodman Middle School, we provide under-resourced children with an extra boost from the youngest age possible, so that they’ll gain the tools and the confidence to pursue higher education and fulfilling careers,” said Dan Green, chief executive officer of World ORT. Green was speaking on May 16 to World ORT delegates who, for the first time in more than two years, convened in Israel to experience firsthand the extensive work of World ORT and meet students who are directly impacted by it.

During a packed visit to Kiryat Yam, between meetings with the mayor and high-level municipal and educational representatives, delegates got an up-close view of the natural progression of World ORT’s STEAM education in action. After watching 5-year-olds playing with the robots they’d built and programmed, the group met middle-school students at the Kahn STEAM centre’s robotics lab who were delighted to show off the robots they’d built and coded from scratch.

“I was impressed by the Kadima Mada robotics demonstrations in Kiryat Yam,” said Jack Kincler of Montreal, who serves as the ORT Canada co-president. “It teaches kids from a young age about following a thought process, team effort, and step-by-step execution until the final, rewarding result is achieved.”

As an added value to the program, students who have gained a basic level of proficiency are encouraged to mentor their peers, thereby acquiring additional skills that will serve them well.

Nata Saslofsky of Atlanta, Ga., a member of ORT America’s National Leadership CohORT program, said, “Seeing firsthand the passion and excitement of ORT students for the robots they built from ideation to conception was exciting, impressive and heartwarming. It would be an amazing world if all kids had opportunities to pursue their interests by taking courses in STEAM subjects that advanced their skills and knowledge. I believe this will lead to fulfilling careers that bring them self-worth and an opportunity to give back to humanity with greater impact.”

Technion graduate Natalie Korlick, a resident of Kiryat Yam and originally from Russia, is one of the instructors at the STEAM centre. “I remember when an interest in science was considered nerdy. Today it’s become cool. Everyone wants to learn robotics.”

Korlick, who also works as a math and science tutor, said academic gaps are evident in almost all students from all grades. “It’s as if they lost an entire year,” she said, referring to the sporadic, long-distance schooling during COVID. “This year, they have to work extra hard to catch up.”

If that’s true for the students at Rodman, it’s all the more so for the Ukrainian students, who’ve seen their whole world turned upside down, and who must adapt to a new country, language and mentality. Thanks to her knowledge of Russian, Korlick is able to provide an extra level of support for the newly arrived Ukrainian students.

“Helping these kids who have been through so much and who arrived with little more than the clothes on their backs is exactly what we’re about,” said Conrad Giles, who has served as World ORT president for the last six years. “We couldn’t be happier that our programs are being used to help get them on track to a better future.”