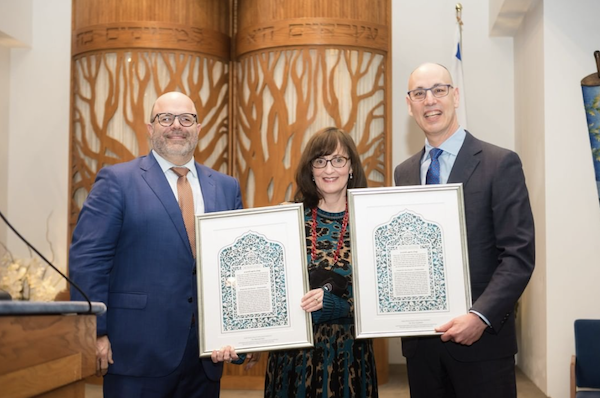 On Feb. 26, Temple Sholom awarded community members Dr. Patricia Daly and Dr. Eric Grafstein with the Pikuah Nefesh Award (to save a life) for their leadership and dedication to our community throughout the pandemic. Mazel tov to both of them! You can watch the presentation on the synagogue’s YouTube channel, along with the evening’s concert featuring Israeli cellist Amit Peled performing “Journeys with my Jewishness.”

The pilot of the new Richmond Jewish Day School (RJDS) and Kehila Society of Richmond food program to enhance students’ access to healthy and nutritious food is now in progress. With start-up funds provided by Jewish Federation of Greater Vancouver and TD Bank, once a week, JFS Vancouver delivers hot meals to RJDS at no cost to the students or their families. In addition, the funds were used to purchase a community fridge and pantry cupboard that will be kept stocked by JFS, Kehila and the Richmond Food Bank. Students and their families can access healthy snacks, dry goods, fresh produce and meals, during school hours.

Denise and Wayne Thompson and Gerri and David Klein are thrilled to announce the engagement of their children, Nikki and Aden. A fall wedding is planned.

The Pamela and Paul Austin Research Centre on Aging will implement an approach to combating disease by integrating computational data analysis into medical research and practice, and by preparing the next generation of computation-science-trained doctors and researchers. It will bring together leading researchers to leverage the power of data-driven analyses, applying computational methods to study and help combat a variety of age-related diseases, including Alzheimer’s and Parkinson’s; pain; psychiatric disorders; genetic disorders; congenital impairment; immune and inflammatory diseases; cardiovascular aging, and the effects of aging on cancer, osteoarthritis, pulmonary disease and metabolic disease.

The Centre for Computational Medicine and its research programs are specifically designed to enable data information flow and collaborative interdisciplinary research efforts with the most advanced equipment and a disease modeling unit, all in proximity to a major medical centre.

Globally, the number of people over the age of 60 is soon expected to outnumber children under the age of 5. As life expectancy rises, so does the prevalence of age-associated diseases, posing a central challenge to healthcare systems worldwide. The gift from the Austins will go beyond the centre, establishing scholarship opportunities for students and an annual lecture.

A new edition of the Jerusalem Talmud is now available in Sefaria’s free library of Jewish texts – available on sefaria.org and the Sefaria iOS and Android apps.

The Jerusalem Talmud, also known as the Talmud Yerushalmi or Palestinian Talmud, is the sister text to the better-known Babylonian Talmud. It was compiled in Israel between the third and fifth centuries from oral traditions. Like the Babylonian Talmud, the Jerusalem Talmud is a textual record of rabbinic debate about law, philosophy, and biblical interpretation, structured as a commentary on the Mishnah. However, a language barrier (it is written in a different dialect of Aramaic), reduced elaboration, and complex structure can make it difficult to study.

The only fully extant manuscript of the Jerusalem Talmud was set down by Rabbi Jehiel ben Jekuthiel Anav in 1289, which formed the base for the first printing in Venice by Daniel Bomberg in 1524. Sefaria has manuscript images from both of these editions visible in the resource panel, to see the original format of the texts alongside the modern, digital version.

The English translation of the Yerushalmi was completed in 2015 by Heinrich Guggenheimer, a mathematician who also published works on Judaism. He spent the last 20 years of his life working on translating the Jerusalem Talmud. With his blessing, Sefaria approached his publisher, de Gruyter GmbH, who agreed to partner on this open access version of Guggenheimer’s historic work. Guggenheimer passed away on March 4, 2021, at the age of 97.