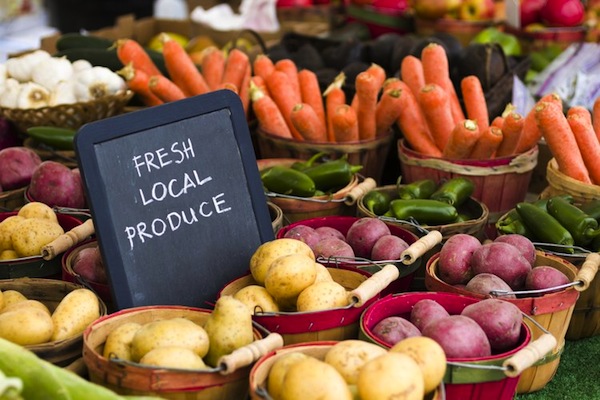 The grant has allowed JFSVI to hire Ora Stefanic, a former director at University of Victoria Hillel, as the market’s coordinator. “It is a privilege for me to be a part of such an important cause and I hope that people will not only benefit from this opportunity to purchase great quality produce at a low cost, but that it will also help support local farms,” Stefanic told the Independent.

“Ora brings a tremendous amount of experience, energy and enthusiasm to this project,” said Leah Kinarthy, head of JFSVI.

The market is not a handout of free processed food or items nearing their expiration date. Rather, according to JFSVI, purchasing fresh produce at close to wholesale prices will both allow people to preserve their dignity and reduce food waste.

“We believe that the Saanich Green Market would be the only fresh produce market offering wholesale prices on Vancouver Island,” Kinarthy said.

JFSVI expanded its programs in 2022. In March and April, the organization distributed gift cards for Thrifty Foods, a subsidiary of Sobeys, to individuals in need through a grant from Community Food Centres Canada, a group that addresses food insecurity across the country.

JFSVI received a $10,000 grant from CFCC for the gift cards and the Jewish Community Foundation grant to hire a part-time market coordinator was also $10,000.

“With shortages, inflation and higher prices, basic food staples are becoming increasingly difficult to afford for families with children and seniors and many others on fixed or reduced incomes,” Kinarthy said. “We have had very positive and grateful, and some happy but surprised, reactions from people who received this unexpected bonus funding. Some people were overcome with emotion and cried over the phone, as their situation was desperate and this helped them a lot.”

Kinarthy got the idea for a green market after pondering how to use JFSVI revenues to assist the greatest number of people with the finances available.

While on the CFCC website, Kinarthy discovered a section promoting fresh produce markets. “I read all of their extensive materials and realized that this was doable for our community. I am especially drawn to the premise of people receiving assistance through very low costs to buy farm-fresh produce rather than free food that is about to expire.”

Following the June 12 grand opening, the Saanich Green Market will run every other week for a full year, though there will also be a market on June 19.

Kinarthy emphasized that it is a 12-month pilot project. She and her board are currently applying for a grant from the Victoria Foundation to help fund the purchase of tents and other equipment to ease the burden of initial expenses. If successful, JFSVI plans to put more money into purchasing fresh food, particularly if demand exceeds expectations. Should enough funding arrive through donations and grants, they hope to hold a weekly market the following year.

JFSVI was recently accepted into the Good Food Organizations program offered by CFCC. The program, which includes more than 270 charities across the country, works to eradicate poverty, food insecurity and improve the health and well-being of low-income Canadians.

The organization budgeted additional funds for the Passover cards. Due in significant part to the largesse of the Fernwood General Store (formerly Aubergines), JFSVI was able to purchase them for kosher food at a discount.

Serving members of the community throughout the Island, JFSVI was started as a grassroots organization in the mid-1990s. It became a registered charity in 1996, when it was called the Jewish Assistance Association. Aside from food support, JFSVI has worked with clients on several other concerns, including housing, home support care and the prevention of social isolation. Anyone wishing to donate to the Saanich Green Market or JFSVI can send an etransfer to [email protected] or visit the JFSVI website, jfsvi.ca.