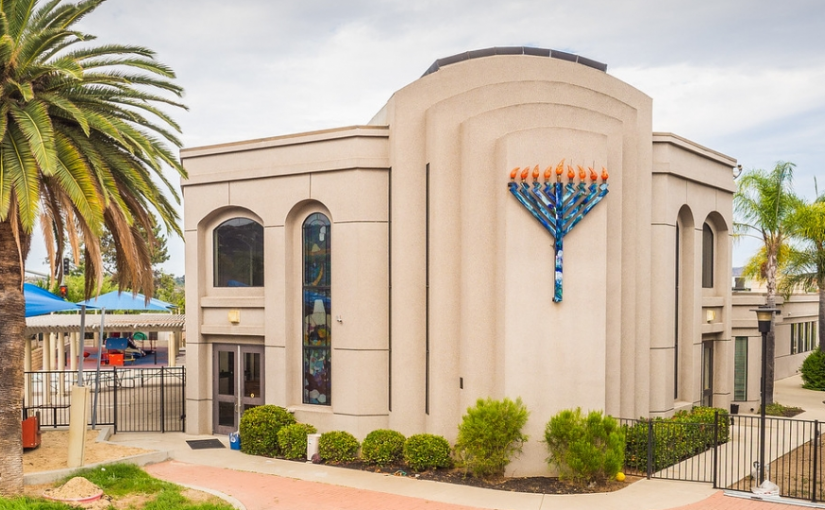 There is a world of difference, needless to say, between the murder of a congregant in a California synagogue and the publication of an overtly antisemitic cartoon. But, while the incidents are incomparable in magnitude, they both implore us to action.

Lori Gilbert Kaye was killed Saturday morning during Shabbat services on the last day of Passover at Chabad of Poway, north of San Diego. Eight-year-old Noya Dahan was hospitalized with shrapnel wounds, as was her uncle, 32-year-old Almog Peretz, who was shot in the leg. Peretz was visiting family for the holiday from his home in Sderot, Israel, a city adjacent to Gaza that is under constant threat of bombardment and attack.

In the instant terror struck, heroism abounded. Kaye reportedly died intervening to protect the rabbi from the shooter. Rabbi Yisroel Goldstein, although shot in both hands, immediately teamed with Peretz, who was also wounded, to shepherd the children in the synagogue to safety. Army veteran Oscar Stewart chased the assailant out of the synagogue and Jonathan Morales, an off-duty border patrol agent, shot at the getaway car as the perpetrator fled.

The alleged perpetrator had posted on social media that he was willing to give up his life for the cause of white supremacy. He blamed “international Jewry” for a litany of perceived “crimes” and said that Jews “deserve nothing but hell. I will send them there.”

This shooting is the latest in a terrible string of attacks on religious institutions and the people within them, including the Easter attack that killed more than 300 in Sri Lanka and the mass murder of Muslims in a mosque in New Zealand, among many other attacks on people and institutions worldwide that do not make the front pages. While such incidents in the United States are partly a result of that society’s dysfunctional relationship with guns, the propensity to murder people in places of worship – like the endless stream of mass killings in schools – represents a particular manifestation of evil.

Six months to the day before the Poway attack, 11 people were murdered in the Tree of Life synagogue in Pittsburgh. Given that horrific number, it is understandable that human nature would react to the latest news with an unconscious sense of relief that the death toll in California was not higher. But this reaction, however natural, must be resisted. The invasion of a religious sanctuary represents an assault on the most basic human instincts for goodness and stands apart from other crimes in its deliberateness and in the calculated impact it will have on the victimized community’s sense of security and belonging. Such attacks – no matter how frequently they seem to come – must never be responded to routinely. Each attack is cause for a fresh sense of revulsion.

While the situations are clearly not analogous, there was another episode recently that demands vigilance. The New York Times international edition last week ran a cartoon of Donald Trump as a blind man with dark glasses and a black kippah, being led by an elongated dachshund with the head of Binyamin Netanyahu wearing a Star of David around his neck. The cartoon exists as part of a long history of motifs that portray Jews manipulating guileless, gullible non-Jews to serve Jews’ devious ends. The New York Times apologized and blamed a lack of oversight.

If the editors of Der Stürmer were still among us, they could justifiably claim plagiarism, as numerous comparative memes on social media have indicated. Such images are extremely common on the internet, where there is no oversight. When they make their way into print in one of the English-speaking world’s most august media outlets, this is a new challenge.

Commentators have observed that the dachshund is a breed that rarely, if ever, serves as a seeing-eye dog. The choice by the cartoonist to use that breed was clearly deliberate. For at least a century, since the First World War, cartoonists have used a dachshund to represent Germany. In this way, the artist was adding insult to injury by equating Israel with the perpetrator of the gravest attack on Jews in human history.

The point of addressing the violent attack in San Diego together with a grievous but far less tangible affront in the pages of the New York Times is to make the case that vigilance should not be let down by the routinization of either violence or terrible imagery. These incidents seem to fly at us with such regularity that it is understandable that we as individuals and a community would have limited resources to respond to each case with the gravity it deserves. The memes and lies may become routinized, but our responses to them must never fall short.

Jewish tradition says that it is better to light a candle than to curse the darkness. The heroes of the Poway tragedy have done that. While we cannot predict how each of us would respond in such a crisis, we can promote small acts of light within our circles of influence, by advocating for understanding and peace and by supporting organizations that do good work. More immediately, we can take the advice of Rabbi Goldstein and do good in the world whenever and wherever possible. In a world with evil and intolerance, acts of goodness and understanding are their own type of heroism.