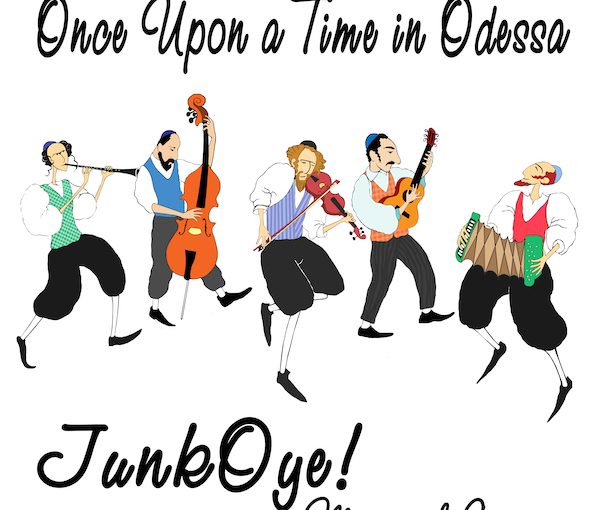 JunkOy! recently released their new 10-track album, Once Upon a Time in Odessa.

It has been busy fall for Vancouver-based ensemble JunkOy!, culminating with the promotion of a 10-track album, Once Upon a Time in Odessa. At the same time, the band is preparing a live video, getting ready for some in-person gigs and recording a second album.

JunkOy!’s repertoire is a mix of klezmer interspersed with a number of other musical genres, including jazz, ska, tango, waltz and rock and roll.

“Our songs are old Soviet chestnuts, which were written by Jews in the early 1900s but appropriated by the Soviet culture. Almost all early Soviet music was written by Jews who grew up with Yiddish and klezmer music,” said Stav Au-Dag, the group’s frontperson. The songs were translated into English by Au-Dag and reworked to eliminate the Soviet influences in the lyrics. All of JunkOy!’s songs can be performed in either English or Russian.

“The idea for this project is simple: to take Jewish music from its Soviet orchestral captivity back to its klezmer Jewish roots,” Au-Dag explained. “And a dash of Gypsy jazz and ska never hurt anyone, either.”

In addition to removing the references to the Soviet regime, Au-Dag said he and the band rearranged the songs in a more traditional klezmer style – “clarinet, violin, accordion and bass plus acoustic guitar, instead of the stuffy big Soviet orchestral music they were recorded in,” he said. “Thus, the songs are democratized and shown to be belonging to folk tradition, in which everyone could participate, rather than a part of an institutionalized culture, attainable only to the highly educated musicians and rich concert-goers.”

Many of the tracks on Once Upon a Time in Odessa draw upon the connections between early Soviet pop culture and its Jewish roots.

Two songs on the new album come from the first Soviet musical, Jolly Fellows (1934): “March of the Cheerful Pilgrims” and “Young Heart.” Both songs have postmodern lyrical contributions from Au-Dag, who added a third verse to the march and dispensed with all references to the joys of Soviet labour, while a second verse was added to “Young Heart.” Musically, Au-Dag said, “Young Heart” benefited from “Ikh Hob Dikh Tsufil Lib” (“I Love You Too Much”) by Alexander Olshanetsky and Chaim Tauber.

The song “Uncle Eli” is taken from “Der Rebbe Elimelech,” penned by Moyshe Nadir. Au-Dag said Nadir’s song is based on the British nursery rhyme “Old King Cole.” In the USSR, the song received assistance from two Jews: it was translated by Elizabeth Polonsky and Joseph Pustylnik added the instrumental part. Au-Dag has augmented the lyrics and written new choruses.

The origins of the tune “Lime-Lemons” are found in 1920s Odessa. Leib Zingerthal sang the lyrics by Yakov Yadov.  Au-Dag pointed out that the popular number dealt with the lawlessness that occurred in the aftermath of the Russian Civil War, when hyperinflation turned a person’s fortune into worthless “lemons.”

The album includes a version of “Steamship,” premièred by singer and comic actor Leonid Utyosov in 1940, and considered by some to be the first video clip in the world. The song was written for the big screen by composer Nikolai Minkh.

Two songs on this album originate in Jewish Poland. “Samovar,” with music by a teenaged Fanny Gordon (born Fayge Yoffe) and lyrics by Andrzej Włast (born Gustaw Baumritter), was written in 1929 and has a long, convoluted history. First popular in Poland, then in Lithuania, it was appropriated by Leonid Utyosov in 1933, without credit to its authors. Au-Dag said Yoffe was so scared of Utyosov, she did not claim her authorship until 1979 – when she received 12 rubles. Au-Dag has expanded the original Russian one-verse version and shifted the story to Crimea, where Gordon was born.

“Tired Sun,” meanwhile, was written by a Jewish duo, poet Zenon Friedwald and composer Jerzy Peterburgsky, in 1937. Au-Dag has added the second part to the song.

The name JunkOy! (or JunkOye!), translated as the Village of the Spirit, is derived from a community at the centre of the Jewish agricultural settlement in Crimea (1925-1941). The group consists of five musicians on stage: Au-Dag, vocals and acoustic guitar; Serge Galois, double bass; Ben McRae, clarinet; Paul Krakauer, accordion; and Masha PinkCod, vocals and violin.

Founded in Montreal in 2014, JunkOy! has been operating out of Vancouver since 2015; its members met originally through Facebook and various musical friends. They hail from throughout the globe: Crimea (Au-Dag), France and Russia (Galois), Canada (McRae), Poland (Krakauer) and Moscow (PinkCod).

To get a taste of JunkOy!’s music, venture over to YouTube and the Magical Crimea channel. There, one can find the rousing performance they gave earlier in the year at Or Shalom, where they raised money for Jewish Family Services to settle Ukrainian refugees in British Columbia.

To purchase Once Upon a Time in Odessa, send an email to [email protected].