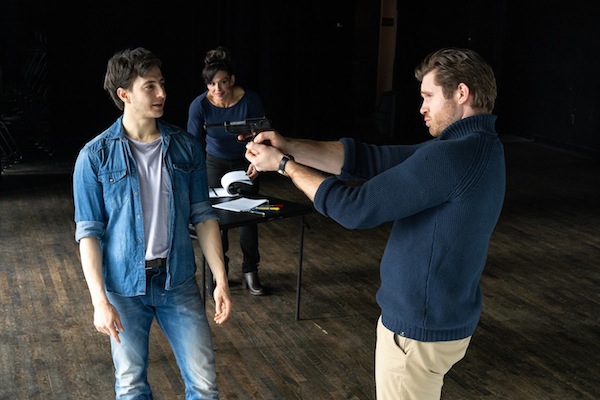 Seminar, by American playwright Theresa Rebeck, is a sex comedy with occasional insights into the life of a professional artist. However, the play feels a bit thrown together and uncertain of how seriously it wants to be taken. As a drama, it is pretty weak. As a sex comedy, it is second rate. And, as a meditation on the life of an artist, it is half-baked. Still, it has moments that work.

Rebeck is a successful television writer with credits like L.A. Law, Third Watch, NYPD Blue and Smash. In 2003, she was nominated (with a co-writer) for a Pulitzer Prize. In addition, she is a noted scholar who holds a doctorate in theatre from Brandeis University. Seminar ran on Broadway for 191 performances before it closed May 6, 2012. Allan Rickman played the lead character, Leonard, a washed-up novelist who teaches young writers. It’s a huge role, a character that dominates the play and all the characters in it.

Martin Cummins played that role in the local production. Four young writers have chosen to pay $5,000 each to study with this literary giant. As the group’s teacher, Leonard is a pontificating jerk and a destructive force. He is also the source of the play’s energy. Cummins’ characterization started with over-the-top bluster and pomposity, a level that gave the character no room to become increasingly arrogant and obnoxious as the play goes on. This weakened his performance and the production.

Four students and Leonard meet weekly in Kate’s apartment for a workshop with the “Great Man.” Kate (played by Leon) is a privileged young woman who lives in a huge apartment on Manhattan’s Upper West Side. She reveals her insecurity by constantly dropping the name of the exclusive college she once attended, as if this establishes her credibility as a short story writer. She’s in love with Martin (Germant), who eventually sleeps with Izzy (Christine Wallace).

Lots of low-comedy bed-hopping occurs in a play that aspires to be about the creation of art. The sex-comedy element may indicate that the playwright was too lazy to develop more sophisticated subplots, or maybe it just shows the playwright’s conviction that stock characters in age-old situations are essential to commercial Broadway success. She is likely right in the latter.

Douglas (Brendan Riggs) is eager to receive approval from his teacher, and Izzy enjoys Leonard’s accolades for what is clearly an inferior work. She succeeds on her looks alone, and ends up in a couple of beds.

And then there is Martin, the best writer in the group and the least secure. He is afraid to show his writing to anyone. When he finally shares his work, Leonard is deeply affected and moved to make the play’s best, and best-performed, speech. He warns Martin of the miserable life that lies before him should he pursue the writing career of which he is clearly capable.

In this speech, Rebeck (through Leonard) offers a cautionary tale about how a talented writer may produce a successful novel or two, but can then expect to see his or her excellent work ignored, suffer envy of less successful writers, and end up teaching creative writing to bored students at some insignificant college. Leonard is clearly describing his own rise and fall, and Cummins rose to the occasion with this speech and we saw Leonard’s bluster combined with personal pain and disappointments. A good moment for Cummins.

For the play’s final scene, Rebeck takes a more romantic view of artists, those individuals who are compelled to create. This final dialogue, between Leonard and Martin, allowed both actors to shine. Germant provided a layered version of Martin. He shifted from an angry victim who demands his money back to an artist in search of a mentor; and Leonard challenges the young writer to work hard. The play ends on a hopeful note.

The actors, for the most part, were too dependent on the script for the establishment of their characters. They should have displayed more anxiety in anticipation of Leonard’s judgment and more distress when he destroys their dreams. The actors needed also to demonstrate why their characters stick with the loathsome Leonard, why they don’t just leave the room and quit his class. Finally, the comedy would have worked better if director Mel Tuck had guided his actors into a faster pace and a greater focus on proper timing. Snappy dialogue needs to snap.