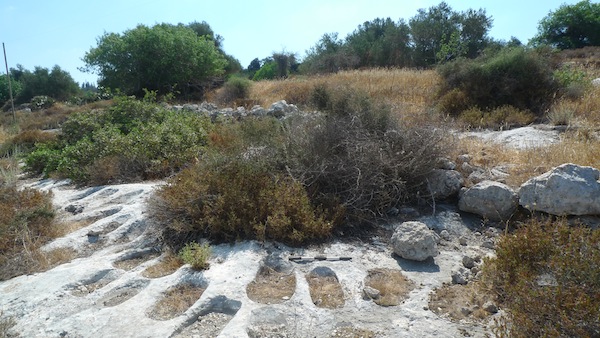 Patch cultivation, or box fields, in the Judean Lowlands. Image is from the 2017 article “The Origin of Terracing in the Southern Levant and Patch Cultivation/Box Fields” by Shimon Gibson and Rafael Lewis in the Journal of Landscape Ecology. (photo from Rafael Lewis)

Rosh Hashanah is upon us and that means time for a special seder with blessings over eight different fruits and vegetables. One of the chosen fruits is the pomegranate (rimon in Hebrew), most likely because the Israeli pomegranate ripens around the Jewish New Year. Over the pomegranate, we recite the following blessing: “May it be Your will, G-d and the G-d of our ancestors, that we be filled with mitzvot like a pomegranate [is filled with seeds].”

Interestingly, the pomegranate is one of the seven species mentioned in the Torah (Deuteronomy 7:12-11:25). Jerusalem has never been considered prime agricultural land, but farmers of old actually grew pomegranates and other fruits – once they had cleared the rocky hills for cultivation.

How challenging was ancient Jerusalem’s topography and climate? Jerusalem has no natural resources (including water) or fertile land. It is situated on a range of hills running north to south between the Mediterranean Sea to the west and the Jordan Rift Valley to the east. The Hills of Ephraim extend from the Jezreel Valley southward through Shechem (Nablus) and Ramallah. The Judean Hills run southward from Jerusalem through Bethlehem and Hebron down to Beersheva. The watershed runs through the heart of the range. Jerusalem is about 800 metres above sea level; the hills to the north, Shechem, 950 metres; and, to the south, Hebron, 1,000 metres.

Today, Jerusalem’s annual rainfall is about 553 millimetres, with rainfall limited to the months of November through March. Historically, however, while there were fluctuations – including two periods of severe drought – it still appears that, until the Middle Ages, Jerusalem was receiving more precipitation than it does today.

Given that less-than-compelling physical description, it is somewhat amazing that any early people stuck around to farm on Jerusalem’s hillsides. Those who stayed applied the ancient technique of terracing, which, as Haaretz’s Nir Hasson has stated, is simply “a series of steps, with the earth held back by a wall of stones to enable tilling the mountainside.”

Setting up and maintaining the terracing, however, is easier said than done. After you manually clear the rocks (a process called izuq in Hebrew), you have to haul over a layer of fertile soil. But your preparations still aren’t complete. You then have to lug back the cleared rocks to create retaining walls. The retaining walls keep the terraces from collapsing during Israel’s rainy season. Only then could you get down to planting.

Most of the farming on the terraced areas of the Judean Mountains was done without artificial irrigation. Farmers harvested pomegranates, grapes, olives and figs watered solely by rainfall.

How do we know people used terraces so long ago? Jon Seligman, an archeologist and the Israel Antiquities Authority’s director of external relations and archeological licensing, wrote his doctorate on the “rural hinterland” of Jerusalem during the Byzantine period. He concluded that, given Jerusalem’s hilly and rocky topography, there must have been terraces. In fact, in Hebrew, the word step also refers to terrace.

Other scholars have noted that, at some Judean Mountain sites, such as Mevasseret Yerushalayim, the terraces were natural features of the landscape. That the terraces were already there did not rule out all the problems, though. For instance, archeologists discovered that the soil in this area was a different colour, implying farmers had dragged in earth from other locations. When the terrace was wide enough, the farmer worked with a plow. When it was very narrow, the farmer was forced to use a hoe or mattock.

Overall, the size of the irrigated areas in the Judean Mountains was quite small. In these irrigated terraces, farmers chose to grow vegetables, rather than to cultivate orchards. The irrigated areas consisted of three parts: construction of a storage system to hold spring water, slightly raised channels to convey the spring water and level terraces.

In the valleys of the mountains, farmers occasionally had to deal with draining off excess water caused by floods or heavy rains. They did this by extending the terracing deep into the valley. Where necessary, they built drain lines. The drain lines were built at levels lower than the channels. On a needs basis, farmers constructed stone walls to divert excess water.

There is evidence that early terracing took place initially in the lower parts of hill slopes, closer to the wadi (valley or ravine which is dry except in the rainy season) beds, which were also terraced, with newer terraces later being built further up the slopes following woodland removal.

Apparently, the chief consideration in ancient and Arab settlements in the Judean Mountains was on preserving cultivatable areas. Hence, most of these settlements ended up on mountain plateaus and adjoining ridge crests.

But how did early people come to consider terracing? For more than 100 years now, some archeologists have been suggesting box fields or patch cultivation may have sparked early attempts at terracing. Box fields or patch cultivation denote the natural step-like appearance of the rocky slopes of hills, with thin layers of chalky marl interposed between limestone or dolomite strata.

Some researchers contend that these box fields were used on deforested slopes. Shimon Gibson and Rafael Lewis write in a 2017 article in the Journal of Landscape Ecology that their appearance on Jerusalem’s hilly slopes (and in other parts of ancient Israel and Jordan) were “sufficiently broad and deep enough to accommodate the root systems of one or sometimes two trees, usually olive trees. While limited in size, they constitute leveled cultivable soils on sloping rocky ground.”

Moreover, “box fields were also recorded as a phenomenon on the hill slope of Sataf, west of Jerusalem. During excavations at this site, the remains of houses and installations dating from the Chalcolithic period (4800-3500 BCE) were found adjacent to two springs of water. Due to the very steep angle of the Sataf hill slope, there can be no doubt some form of retained fields must have existed there during that period…. Indeed, an agricultural terrace from the Early Bronze I (3330-3050 BCE) was excavated at the site, and it too may have been a development of a box field.”

About 35 years ago, at the Sataf Spring, the Jewish National Fund began to reestablish the ancient terraced fields. The organization’s purpose was to preserve the cultural heritage of terracing and to preserve the landscape. The terraces are more or less the same size as the ancient steps. The trees found at the terraces are from the original species – basically, the biblical seven species, which includes olives, pomegranates, dates, grapes and figs.

Part of the terraces have trees, which grow from rainfall only, and part of the terraces contain organic vegetables and herbs irrigated by Sataf’s springs. Spring water travels to the vegetable plots via channels. These channels are simply opened and closed by earth and stone banking. When Jerusalem has a “wet winter,” i.e. with plenty of rain, the fields are watered solely by rain.

The terraces are maintained by a small staff headed by Gidi Bashan and a large number of volunteers. The work is all done by hand. There is no mortar used in the stone walls. Consequently, heavy rains occasionally seep in between the stones, eventually pushing out the stones. The collapsed walls must then be rebuilt, one stone at a time. In addition, there are some 55 small allotments, which allow Jerusalem residents – for a token fee – to farm in their spare time.

Terracing in the Judean Mountains has altered the flow of both the spring water and the run-off water. It has largely halted the growth of the area’s natural vegetation. It has changed the course of paths and roads.

South and west of Jerusalem, Arab villages have continued to employ terracing. Thus, according to EcoPeace Middle East (formerly known as Friends of the Earth Middle East), Battir, a village south of Jerusalem, still uses irrigated terraces, which date back 4,000 years. The terraces are the product of centuries of work. With the billion collected stones “piled one on top of another, generations have engaged in traditional farming. Spring water – stored in small pools – is channeled to the terraced fields by open canals. Today, Battir families grow olives, cabbage and eggplant just as was done in antiquity.

Terraces in any given area will look different, as it depends on what on-site raw materials are available.

From the First Temple period onward, thousands of agricultural terraces were in use around the Judean Mountains. They were destroyed and rebuilt during the Hellenistic, Roman and Byzantine periods. Farmers – including Arab families, until Israel’s War of Independence – and Jerusalem residents were able to make a living from a small number of repaired ancient Jerusalem-area terraces. While terraced farming will no longer provide enough produce to feed a large and expanding population, it is hoped that some terraces will continue to be part of Israel’s cultural heritage.