The 2014 Jewish Federation annual campaign has closed with a record achievement of $8 million, which is an increase of $290,000 from last year. Funds will support critical programs and services on which thousands of community members rely.

Harvey Dales, general chair of the campaign, said it is “a true community achievement – for our community, and by our community. I remain amazed and inspired by this community and the support received from thousands of donors and hundreds of volunteers. In fact, 93% of the total was raised by volunteer canvassers, who contacted their fellow community members to discuss how they could help address the needs of our Jewish community. Despite ever-increasing demands made on us all, the love and generosity that our donors bestow on those in need of a little more support is astounding. This incredible $8 million achievement is significant, particularly in terms of the people, programs and institutions that will benefit from our commitment to tzedaka.”

One of the keys to success was a fund that saw donors’ new and increased gifts doubled through a matching gifts program supported by several major donors. This helped inspire many donors to make first-time gifts to the campaign or to increase their gifts, and helped the campaign reach its record.

From the pages of the JI

Jewish Federation of Greater Vancouver describes itself as an organization “committed to strengthening the quality of Jewish life locally, in Israel and around the world, and to creating a vibrant, caring and inclusive community. Its work is inspired by the Jewish values of tikkun, tzedaka, klal Israel and chesed,” working “in collaboration with many partners locally, nationally and abroad. Its efforts are combined with other Jewish communities in Canada through Jewish Federations of Canada-United Israel Appeal, and in Israel through Keren Hayesod-United Israel Appeal and the Jewish Agency for Israel.”

Federation has been around longer than most of us, and the JWB/JI has been reporting on its activities from the very beginning.

The Sept. 1, 1932, JWB reports on the creation of the “Formation of Vancouver Jewish Administrative Council Ratified by Members of Centre, Chest and Hebrew Aid Society.” The subheading reads, “Enthusiastic Meeting Last Monday Elects First Board of Twenty-four to Serve For Period of Two Years.” A year later, in July 1933, the JWB reported, “Formation of an Endorsation Bureau Unanimously Endorsed.” The full text of both articles follows. 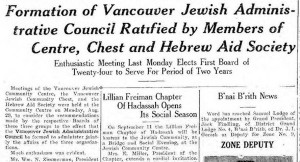 Much enthusiasm was evident.

Mr. Wm. N. Zimmerman, President of the Vancouver Jewish Community Centre, opened the meeting, convened as the Community Centre meeting. He explained briefly the purpose of the meeting, and the advantages to be derived through amalgamated administration, not only in the saving of administrative costs, but in the conservation of time and energy of the workers in the community. He stated, “This amalgamation of administration will not only save money for the three organizations, but will avail for us the best men and women power of the city, that will administer the affairs of the three Boards jointly.”

In the absence of Mrs. M. Koenigsberg. President of the Vancouver Jewish Community Chest, Mr. Wm. N. Zimmerman was requested to preside at the Chest meeting.

Following the motion, the meeting of the Hebrew Aid Society was adjourned, and Mr. W.J. Levin, acting chairman of the Vancouver Jewish Administrative Council, presided.

Mr. Levin stated, “This Administrative Council is created for the welfare of the Jewish Community in Vancouver. The men and women who in the past were able to give freely of their time to communal activities, are now forced to devote a large part of their time to business owing to the depressed economic conditions prevailing. Organizations in the city have been suffering through lack of proper workers. This joint administration will not only save administrative costs, but will conserve and co-ordinate the time and energy of the volunteers. We will unite as one, and work for a common purpose, the welfare of the Community.”

Mr. E.R. Sugarman moved that the constitution as read be adopted for the Vancouver Jewish Administrative Council. This motion was seconded by Dr. Petersky, and carried.

The Chairman explained that under the Constitution as adopted, a Board of 24 must be elected and that the sub-committee working out plans for the formation of the Vancouver Jewish Administrative Council have nominated 21 names for election. To this list could be added nominees from the floor. The enthusiasm of the meeting was so great that thirty names were nominated, and those elected to the first Board of the Vancouver Jewish Administrative Council are as follows: M.H. Brotman, Sam Chess, Mrs. Nellie GeShaye, E.M. Goldsmith, L. Gorosh, M.L. Greene, A.G. Hirschberg, Mrs. H.B. Kalin, I.J. Klein, A.O. Koch, Mrs. M. Koenigsberg, J.L. Kostman, J.J. Lechtzier, P. Lesser, N.C. Levin, W.J. Levin, Mrs. H.A. Nemetz, J. Reed, H. Rosenbaum, S. Rothstein, I. Stein, E.R. Sugarman, Wm. N. Zimmerman and H.B. Kahn. 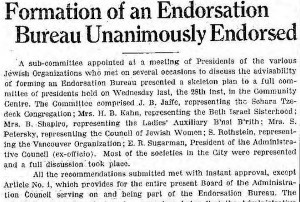 A sub-committee appointed at a meeting of Presidents of the various Jewish Organizations who met on several occasions to discuss the advisability of forming an Endorsation Bureau presented a skeleton plan to a full committee of presidents held on Wednesday last, the 28th inst, in the Community Centre, The Committee comprised J.B. Jaffe, representing the Schara Tzedeck Congregation; Mrs. H.B. Kahn, representing the Beth Israel Sisterhood; Mrs. B. Shapiro, representing the Ladies’ Auxiliary B’nai B’rith; Mrs. S. Petersky, representing the Council of Jewish Women; S. Rothstein, representing the Vancouver Organization; E.R. Sugarman, President of the Administrative Council (ex-officio). Most of the societies in the City were represented and a full discussion took place.

All the recommendations submitted met with instant approval, except Article No. 1, which provides for the entire present Board of the Administration Council serving on and being part of the Endorsation Bureau. The principal argument against such a procedure being that the Administrative Council was elected for the specific purpose of administering the affairs of the Hebrew Aid, The Jewish Community Centre and the Community Chest, and with a representation of twenty-four members they would have increased powers for which their constitution did not provide, and which would enable them if they so desired to veto any project brought before them by the increased new representatives. The Chairman, Mr. E.R. Sugarman, explaining that by virtue of the newly formed organization each new member elected would have a seat of the Administrative Board and become part and parcel of the Board. If it were, however, necessary he felt that the Board though elected for two years (of which they had only served one) would be willing to resign en masse and that a new election could take place and such alterations as were necessary would be made in the Constitution of the Administrative Council at a meeting of Contributors specially called for that purpose.

This explanation seemed to allay the objections raised and on a vote being taken every representative present voted unanimously [in] its favor. It was further arranged that the plan be submitted to a mass meeting on Sunday, July 30, at which meeting the delegates of the Western Conference in Winnipeg would be present and submit their report.

Report of the Sub-Committee

We, the Sub-Committee appointed by the Chairman, E.R. Sugarman, to bring in a skeleton plan for the formation of an Endorsation Bureau in Vancouver, DO HEREBY BEG TO STATE that we have seriously considered the question from all angles and make the following recommendations to you:

All of which is respectfully submitted,

As he tallied up the fundraising dollars earlier this month for this year’s Federation annual campaign, Harvey Dales noted with satisfaction that almost $7 million had been pledged in Vancouver since the campaign began in September. With a month to go until it wraps up in January, he’s aspiring to reach the $8 million mark.

“Our campaign had been relatively stagnant for the past few years, with only slight increases,” he reflected. “This year, which is my last year as campaign chair, I felt it was important to reach the $8 million mark because there are just so many needs.”

Dales and his team established a matching fund, where six donors promised a total of $125,000 in matching funds; that meant every unrestricted dollar of increase to the campaign made by any other donor would be matched. Another matching campaign was established with a focus on 20-to-35-year-olds, this one a two-for-one match.

The two matching funds have been so successful that Federation found itself on the verge of running out of matching funds a few weeks ago. “We went out and raised further funds, another $30,000, to top up the fund and ensure we could continue with the matching,” Dales said. “We’re still seeking additional funds for the match fund, and I’m very confident it will bring us to our $8 million goal.”

For the first time in many years, each one of Federation’s divisions has seen an increase in the dollars pledged compared with gifts from the same donors last year. That includes major donors, men’s philanthropy, women’s philanthropy, community and young adults. “The gifts that have come in have been incredible,” he told the Independent. “One individual who hadn’t made a gift before pledged $750. Another newly wedded couple explained they’d really stretched their budget by giving us $360 last year, but this year they were giving us $540 because of the matching funds.”

“I believe it’s so important for the community to know how vital Federation is,” he continued. “It’s our social needs network for the community, whether it’s funding for social services, education, youth, outreach or seniors. Both here, overseas and in Israel, there are so many recipient agencies that rely on Federation for the bulk of their funding to provide desperately needed services.”

Vancouver’s community is extraordinary for how many individuals commit to volunteering and canvassing for the annual campaign, he added. “In campaigns in other cities, the canvassing is done by professionals, but here in Vancouver our community is just so involved.”

To contribute to this year’s campaign, visit jewishvancouver.com.