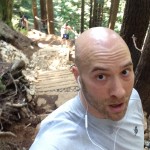 I’ve never really been able to meditate. At least not in the formal way most people depict meditation. There have been no ohhmmmm moments for this guy.

Oh, I’ve tried – with the most patient teacher I’ve ever known. But “calm” doesn’t seem to help me clear my mind. It actually opens the door for every possible thought to prance around like they own the place. Instead of walking out of a meditation session with a sense of peace, I’d walk out with a long to-do list of things I just remembered I had to do.

That said, several years ago I realized that I do have meditation’s version of a best friend (for me anyway) … ice hockey! While going through a challenge-filled time in my life I discovered that no matter what was going on in my noggin all day, the moment I stepped onto the ice to compete my mind immediately focused on one thing and one thing only – the game in front of me. My focus became singular for that minute or so shift.

I mean, who has room to think about stresses at work or home when your heart is being pushed to 170 bpm while being chased down the ice by a 235 lb dude on sharp blades? I was grateful I had that escape.

I found that kind of focus again recently when I took on the infamous Grouse Grind – Greater Vancouver’s natural supplement for addicts of torture and misery.

Prior to this summer I had avoided the Grind for several years. With the exception of the cold beer that awaited at the top, I never enjoyed a darn thing about past climbs. However, now 25 lbs lighter and in much better shape than I was in my “why can’t we have nachos for breakfast?” days, I was actually looking forward to seeing how it felt this time around.

OK, well, it still seemed like a fairly torturous way to spend a Sunday morning (you were expecting me to love it, weren’t you!?). I pushed myself hard enough that throughout the final quarter I wasn’t sure if I’d die of an exploding chest or simply by passing out and falling backwards.

However, guided by pride (rather than beer), I creamed my old times with a solid 46-minute scamper. Aside from the personal sense of accomplishment and still-functioning lungs, what I really took from my excursion up Grouse Mountain was that discovery of another personal form of meditation.

Not more than 10 steps into the trek, my mind narrowed in on two simple things until the very end. I saw only the next step/rock I needed to take and heard only my breath – I don’t even remember the music playing in my headphones.

For 46 minutes I thought of nothing except what was right in front of me and the life that ran through my body.

I do wish I could find such life clarity in a less strenuous environment from time to time – say, bearing down on a bowl of chicken wings or buying shoes (don’t judge) – but I think it’s important for everyone to find their meditative niche and connect with it when time permits. Despite complete exhaustion and tight quads, I came off of the mountain feeling mentally refreshed in a way I hadn’t been in a long time.

Go out and find your cup of refreshing ohmmmmm. It’ll be worth it!