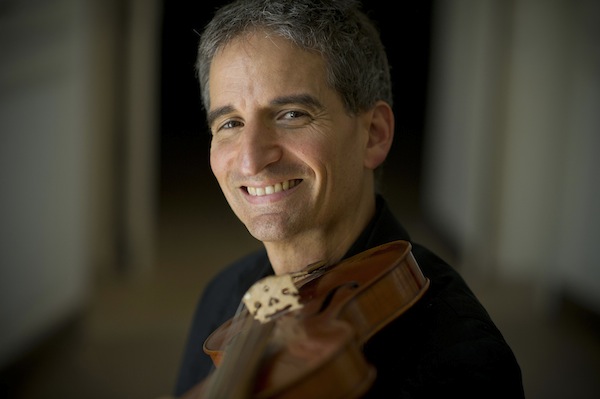 Violinist David Greenberg teaches a course called Cape Breton-Baroque Integration, which is “devoted to creating living moments on the violin through the art of ‘keeping it swirly.’” He keeps it swirly by a range of techniques, but the intangible part derives from his love of Baroque and Cape Breton music.

Greenberg is co-artist-in-residence at Early Music Vancouver this year along with David McGuinness, and the pair will play in a few performances as part of this summer’s Vancouver Bach Festival: Scottish Baroque and Other Traditions, which takes place July 26 to Aug. 6 at various venues in Vancouver.

Early Music Vancouver’s artists-in-residence program started last summer, with Cree-Métis Two-Spirit baritone Jonathon Adams. The program was initiated by EMV artistic and executive director Suzie LeBlanc “to honour Canada’s diverse heritages while at the same time exploring the convergences between ‘world music’ and early music.” Greenberg came to be an artist-in-residence through his connection to LeBlanc, who is an interdisciplinary artist – he has performed with her many times over the years.

“Many of those collaborations involved a degree of integration between folk and Baroque music,” Greenberg told the Independent. “Often, those collaborations included David McGuinness, who is also a close friend and colleague from Glasgow, a scholar of 18th-century Scottish music, a brilliant musician on various keyboard instruments and the founder and director of Concerto Caledonia.

“David and I have worked together for over 20 years,” said Greenberg, “mostly on projects that involve some degree of Baroque-traditional stylistic integration. Suzie asked David and me to be co-artists-in-residence for the 2022 festival since this year’s theme is the integration of Baroque and Scottish traditional music.

“Over the two-week festival … David and I will perform solo, chamber and orchestral concerts. We will also coach young musicians and perform with BOMP (Baroque Orchestra Mentorship Program) as part of our activities.”

Greenberg was born in Washington, D.C., and grew up in Maryland. He lived in Canada for 30 years, but is currently living in Corvallis, Ore.

A graduate of Indiana University’s Early Music Institute, he has performed, taught and recorded in multiple places around the world, but mainly in North America and Western Europe. In addition to LeBlanc, he has performed with more than a dozen groups and performers, and been a guest soloist and/or director with several orchestras. Between these collaborations and his own ensemble Puirt a Baroque (pronounced poorsht-a-baroque, and meaning tunes from the Baroque), he has recorded more than 80 CDs. As well, he is a composer and arranger, and he co-authored Traditional Celtic Violin Music of Cape Breton: The DunGreen Collection with Kate Dunlay.

“I started playing at age 4, dabbled in both classical music and traditional folk fiddle as a kid, went to conservatory and got depressed, switched over to Early Music performance, which suited my temperament better, and joined Tafelmusik (Toronto-based Baroque orchestra) for a decade in the ’90s,” said Greenberg.

“Alongside my Baroque playing, I dove into learning the Cape Breton fiddle style, started a few bands, worked with many colleagues around the world…. The combination of the Baroque and Cape Breton musical languages is where my sense of 18th-century Scottish violin music comes from. Italian and Scottish composers are connected by way of some Italians living and working in Scotland in the 18th century, resulting in an inevitable mixing of the styles, though to what degree is a matter of opinion.”

He said the fun thing about the Baroque and Cape Breton styles “is how their esthetic hierarchies are totally different. So that means they work as effective comic relief for each other! Cape Breton music is basically the continued, naturally evolving, living tradition of 18th-century Scottish Highland fiddling. A strange fact is that Baroque music was popular in Scotland about 50 years beyond when it died out in continental Europe. That means that the Scottish traditional music and Scottish Baroque music coexisted side-by-side in 18th-century Scotland, including many examples of music that lie somewhere between the two styles.”

Greenberg plays a Baroque-style violin made in 2000 by Masa Inokuchi in Toronto. He said, “Cape Breton music is played on a modern fiddle these days, but it works on a Baroque fiddle within the appropriate context.”

And as for a little more context on Greenberg and his musical range, he shared, “My mom has always loved singing Yiddish songs and accompanying herself on the piano. I enjoy backing her up on fiddle when I visit her.”

For tickets go to the Vancouver Bach Festival, visit earlymusic.bc.ca.

Isaac Greenberg grew up speaking Hebrew, and he was raised with Shambhala, as well. (photo by Alex Rose)

With his lean frame folded behind a small coffee table at Just Us Café in Halifax, with his large wire-frame glasses and thinning hair, Michael Chender looks somewhat like Larry David. But although Chender shares David’s sense of humour and perhaps some of his neuroticism, the soft-spoken and measured Chender embodies little else of the Curb Your Enthusiasm star’s notorious annoyance and impatience with other people. That is not a coincidence.

Chender is a Jewish Buddhist, or Jew-Bu, one of a number who call Halifax home. Most of the Jew-Bus in Halifax follow a tradition called Shambhala.

In Tibetan folklore, Shambhala is a mythical kingdom that represents a just and good society. It is also the inspiration for a worldwide movement, which has its headquarters in Halifax.

The movement was started by Tibetan Buddhist Chögyam Trungpa Rinpoche (Rinpoche is a Tibetan honorific). He escaped Chinese-occupied Tibet in 1959 at 19 years old, already a renowned sage. According to Chender, in Tibet, older teachers would come and ask the teenage Trungpa questions.

By the 1970s, Trungpa had settled in Boulder, Colo., where his Western following began to develop in earnest. He wanted to teach meditation in the West in a secular language. He taught that everyone was possessed with a fundamental goodness, and that life is worth living. A central philosophy of Shambhala is spiritual warriorship, which is accomplished by living a life of fearlessness, gentleness and intelligence.

Trungpa was known for both his incredible mind and for being an eccentric. He encouraged his followers to take pride in their heritage, so on Robbie Burns Day he would dress up in a kilt and celebrate with his Scottish disciples, and he would work Yiddish phrases like “oy vey” into his lectures. In 1986, Trungpa moved the headquarters of the Shambhala community to Halifax. In 1987, he died there of liver failure at the age of 48.

“He decided that Colorado was too speedy, materialistic, flashy, and that we should move to a simpler, more peaceful, calm place,” said David Greenberg, a former Jew-Bu and current Christian. He was raised outside Boston as an atheist Jew, and is conversant in Hebrew. He is the grandson of Rabbi Simon Greenberg, the founder of the University of Judaism at Los Angeles, a branch of the Jewish Theological Seminary of America.

When Greenberg was 17, he started reading Trungpa’s teachings, and joined the Shambhala community for the first time at 22. He met his wife through Shambhala and, together, they had four children. Eventually, the couple divorced and, in 2009, Greenberg converted to Christianity. Nonetheless, he said he felt more Jewish when he became a Buddhist, and even more Jewish now as a Christian; it’s allowed him to appreciate his Jewishness and not just take it for granted. For example, he said, he explains the Hebrew meanings of Bible verses to his fellow churchgoers.

“I began to feel much more Jewish after I became a Buddhist,” said Chender. “My being Jewish … it’s deep in the bones, an ethnic thing. I’m very proud of my people.”

Chender calls himself an Upper West Side Manhattan product of the late 1960s – a Woody Allen-type kid who was high-strung and philosophical, the kind who was worried about the world ending millions of years in the future. For him, being Jewish meant viewing the world through Allen’s lens, not beneath a phylactery on his forehead. Religion was never a key component of his Jewish identity – he only knew one observant family growing up – but the culture and heritage always were. He is proud of the Jewish intellectual and moral tradition.

Chender knows what he likes about Judaism and what he wants to take from it. Not every Jew-Bu has such a concrete self-identity.

Isaac Greenberg is David Greenberg’s son, and a university student in Halifax. He grew up speaking Hebrew, and he was raised with Shambhala, as well. After his parents divorced, his mother moved him and his three siblings to Halifax. He was 11 at the time, and he lost his connection with Judaism for almost a decade. When his mother left Shambhala, when he was 17, he lost touch with that community, too.

“After first year of university, I kind of lost my mind … I just became totally untethered. I broke up with the person I was dating for a year-and-a-half, which set off this total spiral of insecurity and not figuring myself out. And then you just grasp the things that you know,” said Greenberg, noting that Judaism and Shambhala are his “foundations.”

Towards the end of his second year, he wanted to reconnect with Judaism. He was dating a Jewish woman, he said, “and she invited me to a seder and she was talking all about Judaism. And I was like, ‘Oh, I remember these things, and they were really great times.’”

Since then, he has been making a conscious effort to become more involved in the local Jewish scene. But he’s not entirely sure how.

“I kind of feel like an outsider,” he said.

As to why some Jews find their way to Buddhism, Chender said there are three common links between Judaism and Buddhism. The first one is appreciation for the critical mind, of inquiry and analysis. The second one is the importance of humour. The third is the truth of suffering.

“As my grandmother said to me when I was telling her about Buddhism, ‘You’ve gotta tell me this?’ We kind of know the truth of suffering in our bones,” said Chender. “So, it was like really coming home to some long-lost cousins who, actually, whatever they’ve been doing the last few thousand years, they had figured some sh*t out…. I wouldn’t go so far as to speculate where the lost tribes went or came from, but, you know.”

Alex Rose is a master’s student in journalism at the University of King’s College in Halifax. He graduated from the same school in 2016 with a double major in creative writing and religious studies, and loves all things basketball. He wrote this article as part of an internship with the Jewish Independent.