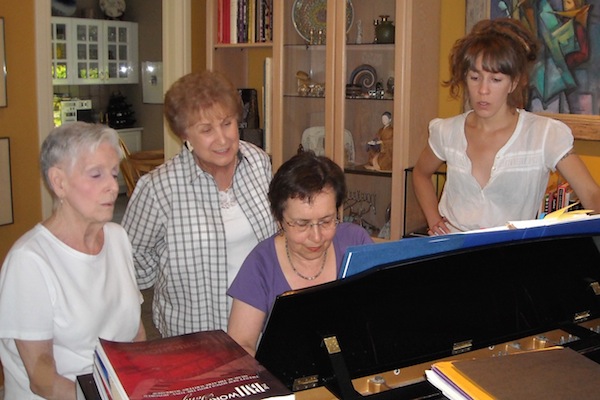 Canceled more than two years ago because of COVID, With a Song in My Heart, a special concert for Jewish Senior Alliance’s spring forum, is back. And it’s even more special.

The May 15, 2 p.m., performance at the Peretz Centre, led by Wendy Bross Stuart, is dedicated to Claire Klein Osipov and Joan Beckow.

“We were originally scheduled to present this program in March 2020. We were well-prepared. Even Claire came over to rehearsal on March 16, 2020 – so she could shep naches from her daughter Lisa’s singing, and she gave us some ‘notes’ to include. Lisa [Osipov Milton] and I were using the very musical arrangements I had created for Claire. Then, COVID happened and the program was ‘postponed.’ In August 2020, Claire passed away.

“Fast-forward to 2022. Two of the singers [David Urist and Osipov Milton] were unavailable. Erin Aberle-Palm was available, and I was thrilled to have her on board. Kat Palmer and Chris Adams had been involved in the recording sessions for the Joan Beckow Legacy Project, completed in February. Chris agreed to join us for a Beckow duet – with Kat.”

Beckow passed away in January 2021.

“About 18 months before,” said Bross Stuart, “my daughter Jessica had come with me to the Louis Brier Home to visit Joan. She asked Joan for her blessing for us (mother and daughter) to record and orchestrate many of Joan’s songs. Joan was visibly touched. She gave us her blessing to proceed. And proceed we did. The Joan Beckow Legacy Project, funded generously by the Canada Council and the Ontario Arts Council, has included the recording and orchestration of 22 of Joan’s pieces, by 30 musicians, in Toronto and Vancouver. Plus a documentary on Joan’s life (directed by my husband, Ron Stuart) and much more. Assistance and support also came from Joan’s son, David.”

Most of the project has taken place during COVID. About the pandemic’s effects, Bross Stuart said, “To make an effort to be positive, I would say, having more time has allowed Jessica and I to create the Joan Beckow Legacy Project and collaborate in every way. The music and the mutual respect have been well beyond my expectations and – as [fellow community member] Sharon Kates added – a mitzvah for everyone. Especially for people who do not yet know the breadth of Joan’s musical output, it will be a stunning discovery.”

With the developments of the past two years, the musical program for the JSA forum has changed from what it was in 2020.

“It includes Yiddish songs – for example, ‘Tum Balalaika,’ ‘Rozhinkes Mit Mandlen’ – in Claire’s memory, and many Joan Beckow songs, recently recorded in studio, including ‘On the Other Side of Nowhere’ and ‘Tov L’Hodot,’” said Bross Stuart, noting that every composer of every song in the program is Jewish.

The Yiddish songs are from the repertoire that Klein Osipov and Bross Stuart presented over the many years they worked together.

“We have a piece of music which says, ‘Because I knew you, I have been changed … for good,’” said Bross Stuart, referring to the song “For Good,” written by Stephen Schwartz. She added, “David Beckow chose his mother’s own lyrics to inscribe on her gravestone: ‘When this life is over, we will meet somehow, on the other side of nowhere, on the far side of now.’ Kat will sing it.”

The Stuarts and Beckows are longtime friends.

“We met Joan about 50 years ago, when her husband, Jack, was Ron’s anthropology student at UBC. Joan’s music was absolutely magic. When she asked me to assist her with the music direction of a show she was working on, I said yes as soon as I saw/heard one of the lead singers – Claire Klein Osipov!

“Joan and I worked together on choral pieces, on musical theatre pieces, on Jewish liturgical pieces and on classical pieces. I organized the publication of a number of her works, and public performances as well. Her music and her friendship enhanced our lives – and inspired my daughter, Jessica, to become a composer and musician. Joan was a mentor.”

“Growing up in a New York City suburb (Yonkers),” she said, “my grandmother lived with us while I was growing up. Although her most comfortable language was Yiddish (Galitzianer variety), she spoke accented English to me. Yiddish was not what my parents wanted me to speak. This, of course, made Yiddish so much more interesting to me. Years later, in Vancouver, working with Claire and creating musical arrangements for all those songs – four CDs’ worth – required a detailed understanding of the Yiddish. The German I had studied in high school and at McGill was helpful, but working with Claire was even more helpful. We did a lot of concert work together, and I would say that our daughter Fiona grew to love Yiddish as a result. Another mentor for us!”

With a Song in My Heart is JSA’s first hybrid event, taking place live at the Peretz Centre, with streaming links available for YouTube, Vimeo or Zoom. Registration is required in both instances. If attending in-person, proof of vaccination is also required. Visit jsalliance.org, email [email protected] or call 604-732-1555.