Deborah French’s children – Henry, Elisheva, Amariah and Rafaella – about to enjoy the fruits of their labor, having made their first chocolate cake. French published The Cookbook for Children with Special Needs in 2015. (photo from Deborah French)

Deborah French’s rollercoaster ride began on June 14, 2004, when she gave birth to her second child, Amariah, who unexpectedly had Down syndrome. “Up until that point, we had absolutely no experience with special needs and never considered we ever would,” said French.

Growing up in northwest London, French made aliyah with her husband Johnny and their first two children in 2007. French chose to become a stay-at-home mom with the birth of Amariah. A year later, the couple’s eldest child, Henry, who was 2 years old at the time, was diagnosed with high-functioning autism.

Once a meticulous planner, these days, French finds that if she thinks too far ahead, she gets filled with anxiety and concern about how they will manage and how their children will fare in the future. “I don’t have the answers, so we don’t have expectations,” said French. “We take everything day by day, one step at a time…. We both only want our children to be happy and fulfilled.”

Going against the advice of many experts who said Henry could not concentrate on a single task for longer than five minutes and that he had poor motor skills, French set about baking cookies with her son one day when he was 4 years old.

“In the kitchen, his fine motor skills were excellent,” she said. “Henry worked solidly for an hour and, as freshly baked cookies with recognizable shapes came out the oven, I knew I was on to something. Being in the kitchen calmed Henry, channeled his energy and gave him a huge confidence boost, as he was able to provide food for others.”

French was asked if she would consider taking other kids into her kitchen. This paved the way for her cooking classes and, eventually, led to her compiling a comprehensive cooking course for children with special needs.

French, who is now the mother of five, has become an expert via life experience.

“After bringing my children into the kitchen, I saw firsthand the effect cooking had on their self-esteem and confidence,” she said. “I believe that any child suffering with learning or emotional difficulties will improve and develop their abilities at a faster rate if they are relaxed and participating in an activity that does not feel like therapy. This type of environment allows them to give of themselves to others and stimulates their creativity, giving them more chance to overcome their challenges.”

“We believe that education breaks down barriers and paves the way for acceptance and inclusion – a concept that benefits all children,” said French. “Our Mazal Le Chaim program takes children from mainstream to special needs schools to activities and events to encourage integration, teaching them to confront their fear of the unknown and embrace it.” 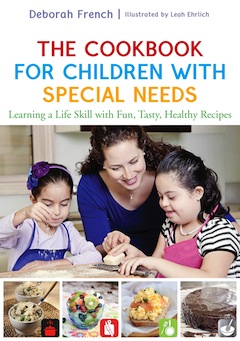 French’s first foray into writing was a memoir, A Brief Moment in Time (ASD Publishing, 2013), which won honorary mentions at Paris and New York book festivals. Her most recent publication is The Cookbook for Children with Special Needs (Jessica Kingsley Publishers, 2015).

French’s greatest pleasure comes from seeing how much Henry enjoys helping others who are struggling. “Many children with special needs are very in tune with the feelings of those around them,” she said. “And it is a wonderful feeling when my son notices that I’m tired and he responds by declaring, ‘Don’t worry, Mommy, I’m making lunch for everyone today. You sit down.’ Being able to help me in that situation gives him great satisfaction.”

Her cookbook is 200 pages and is geared toward children and young adults with special needs, their parents, caregivers and guardians. In essence, it is a cooking course to be followed from levels 1 through 3, with each level introducing additional foods, techniques and recipes.

Within each of the three levels, there are 10 recipes, seven of which are savoury and three of which are sweet. “The focus on savoury dishes reinforces the importance of moderation in our diet, ensuring that our primary foods are healthy ones, but that our indulgent foods are exactly that,” said French.

In the cookbook, she writes: “I was angst-ridden the day I allowed Henry to use a kitchen knife. After a month of continuously baking cookies, I took a giant leap of faith and watched as Henry followed my careful instruction and prepared a salad. There was not a chopped finger in sight! Henry sliced cucumbers, pepper and tomatoes. He was calm and attentive throughout. It was so exciting to see his elation after preparing the final dish. We ate salad for weeks after that day whether we wanted to or not!”

Said French, “Learning how to cook is an essential life skill that boosts self-confidence and develops individuality and creativity in all who try it. Those with special needs are no exception and proficiency in the kitchen will play a key role in their independence as adults.”