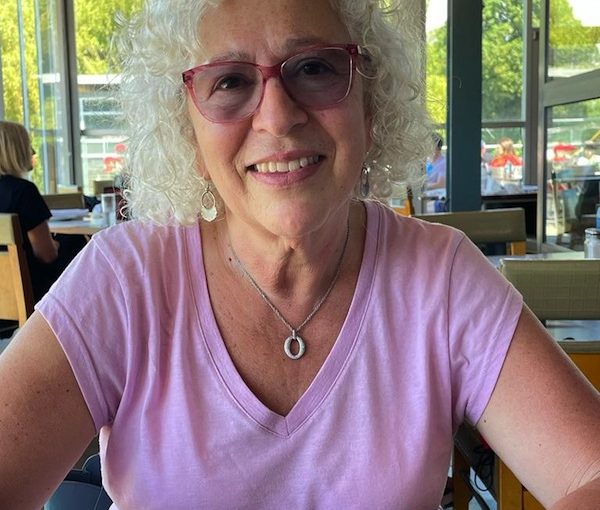 Helen Pinsky still chairs Waldman Library’s Jewish Book Club, which she started in 2015 when she was librarian there. (photo from Helen Pinsky)

Helen Pinsky founded the Waldman Library’s Jewish Book Club in 2015, when she was the librarian there. She has since retired from the position but stays on as the book club chair.

“We started it as a drop-in,” Pinsky told the Independent. “Always once a month, on a last Thursday. People drifted in gradually. Some were library volunteers who wanted to discuss their recent reads. Others were readers who wanted to talk about books. Waldman had book clubs before, on and off for years, but this one has lasted the longest.”

She defined the club’s goal: to foster the love and understanding of books written by Jewish authors or featuring Jewish content. “We try to select books that are entertaining, interesting to many readers. Mostly we read fiction,” she said. “Rarely, we try non-fiction books, but unless they are memoirs, not many people are eager to read or discuss them. We even attempted a separate non-fiction club, but it didn’t work.”

The books selected come from different sources. “I’m a librarian. I listen to what people want to read,” said Pinsky. “Sometimes, I select the books myself. Other times, the library staff might make a suggestion, or the group would vote on the title or author.”

The books that club members have read so far are divided between English-language writers and translated novels. “There are so many outstanding Israeli writers,” said Pinsky. “Our chosen books are not always new. Some of them were published a number of years ago. Often, they are not easy reads.”

But new or old, easy or sophisticated, they are always books with brilliant writing and complex ideas – “great literature exploring universal themes,” she said.

Generally, the club reads mainstream fiction. “We often read historical literature,” Pinsky said. “Not so much about the Holocaust and wars, but stories about Jewish life in other centuries and other countries. Some of our most captivating recent novels talked about the post-Holocaust decades, about the survivors rebuilding their lives.”

To find books for the club, Pinsky regularly scours the Jewish Book Council website. She reads reviews on Goodreads and Amazon. She seeks recommendations from the National Council of Jewish Women.

“We always choose books with multiple copies at the Waldman, as well as at the VPL [Vancouver Public Library] and the Richmond library, so people are not forced to buy them. Occasionally, the book was donated. Then it makes a round on a goodwill system, so every member of the club can read it. We usually announce the titles three or four months in advance, to give people time to read the books.”

The club’s facilitator from the beginning, Pinsky tries to make every meeting interesting in a different way. “I do my research about every book. Usually, in the beginning of a meeting, I would do a bio sketch of the author. Then, before we open a discussion, I would list the main points of the story, maybe a quote or two from the reviews to demonstrate something that caught other readers’ interest,” she explained. “Then we go around the table. Everyone who wants to speak raises their hands. I would ask questions to nudge the conversation. Who is your favourite character? Why? What lesson did you learn from the story? Some people enjoy talking at the meetings. Others keep quiet; they come to listen. I keep a list of speakers, but if someone new, who rarely participates, raises their hands, I bump them to the top of the list.”

In her experience as the club moderator, people are interested in different aspects. “Some read for the plot,” she said. “Others are fascinated by character development or emotional issues. Still others pay the most attention to the quality of writing.”

She said that, occasionally, even if you don’t like a book, it could provide a valuable insight. “We once read a book about Alzheimer’s. I didn’t want to read it,” she admitted. “It seemed too close to my private life. I had a personal experience with this dreadful disease. My mother had Alzheimer’s for years. It was very hard. But the book was written in a remote way that allowed me to maintain emotional distance. Otherwise, I probably couldn’t have read it.”

She shared her opinions about that book with the club, and the discussion was lively. It also veered from that particular book into more personal territory, as everyone had a story to tell.

Besides discussing books, sometimes the club has the privilege of meeting the authors. “If the author is local, I would invite them to speak to us,” Pinsky said. “Often, we tie our book selection to the Jewish Book Festival and organize the club nights to coincide with the author’s public appearances.”

According to Pinsky, the number of participants in the club fluctuates from month to month. Some people come for several months and then stop for various reasons. Some realize they are not interested, while others are devastated to leave the club but have no choice. Sometimes, more than 20 people attend the meetings, but the optimal number is around 10 or 12, said Pinsky.

“As we meet in the daytime, most of our members are retired,” she said. “Although we have younger participants if they are students or have flexible working hours, or if they are library staff. Some of the members are writers themselves. Newcomers to Canada also occasionally join the club to read and discuss Canadian Jewish authors.”

Pinsky stressed that COVID changed the book club atmosphere a lot, as it changed everything else. “During the pandemic,” she said, “we couldn’t meet in person, of course. We had our meetings on Zoom for almost two years. Only the last few months, we resumed out meetings in-person, and some longtime members are still not comfortable meeting face-to-face. New people come in. We might institute some changes to reinvigorate the club.”

The July selection of the club is The Last Rose of Shanghai by Weina Dai Randel, published last year. Everyone is welcome. Send a message to [email protected] if you’d like to join the discussion.