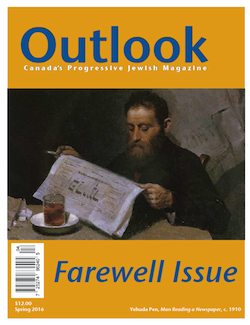 Ken Klonsky speaks on “Freeing David McCallum: A Story of Exoneration” at the Outlook fundraiser and social event Sept.27. (photo by Winnifred Tovey)

“Number one, never talk to the police.” The first tip Ken Klonsky gave when asked by the Jewish Independent for the best advice to avoid getting wrongfully convicted by the police. Klonsky – Vancouver author and director of Innocence International, which focuses on righting wrongful convictions produced by false confessions – spoke at Outlook magazine’s annual fundraiser and social event on Sept. 27, which was held at the Peretz Centre for Secular Jewish Culture.

The event began with refreshments. During the initial schmoozing, Faith Jones, a member of the Vancouver Outlook collective, explained that people attending were “from various Jewish activist communities, such as Independent Jewish Voices,” as there is an “overlap with IJV and the Peretz community and the new UBC club, the PJA” (Progressive Jewish Alliance at the University of British Columbia), with topics ranging from food security to Yiddish-language activism.

Jones included that “many other people read Outlook because it offers a voice they don’t hear often” and, within the community, there is a “strong sense that words can change the world.”

Amid stories of the joys of being Jewish and various community and activist involvements, the crowd of about 25 people entered the downstairs room at the Peretz Centre scattered with foldout tables and a slide projecting: “Freeing David McCallum: A Story of Exoneration.”

Klonsky explained “the fraudulent case” of David McCallum, with which he became involved after receiving a letter from McCallum, who had read an interview Klonsky had done for The Sun Magazine with Dr. Rubin Carter, the founder of Innocence International, who passed away April 20, 2014.

“David McCallum was in prison for 19 years when he saw this. What he saw was a friend was reading it somewhere in the library of the prison. He was able to read it, and saw my name connected to it. He wrote to The Sun, asking for my address and he wrote me a letter asking if I would help him with his case. I had nothing to do with the law at that point in my life. I was just basically an observer…. But the letter was so poignant that I decided I was going to get involved.”

Klonsky explained, “The police say, when they are in private, they say, and I’m using their language, the reason people talk to us is because they are stupid and they love to tell their stories and that’s how we get them. Now, I know young people, the reason they talk to the police is they think, ‘Well, I haven’t done anything wrong and I’m going to tell them the truth, the truth is going to protect me’… but your truth might not be the truth of the next person they talk to. McCallum and [the late Willie] Stuckey… they were both told, your friend has told us you shot Nathan Blenner, but we know you didn’t do it, we know it was him.”

Elaborating on the mindset of the interrogated individuals, Klonsky said, “Well, I’m going to go home because all I’m saying is what my friend did … neither David nor Willie confessed to the crime. They said they were witnesses to somebody else doing it. They didn’t realize, being children, that if you’re along for the ride, you are an accomplice and it doesn’t matter. You are going to get charged.”

McCallum was exonerated last year, after nearly 29 years in prison.

Klonsky is currently working towards proving the innocence of Atif Rafay and Sebastian Burns. He called the situation “the greatest tragedy I’ve ever ran in to” because “there is no evidence linking them to the actual crime” and, he alleged, their “false confession … was engineered by the RCMP. Sebastian and Atif were the youngest people that have ever been victimized by this routine.” Klonsky continued, “It is a very dangerous thing to do … they know how to set up a young person.”

In responding to a question of the number of wrongful convictions in the United States, Klonksy said, “A minimum of 35,000, that is 1.5% of the 2.3 million people who are in prison in the United States.… This is the mechanism of an oppressive state. I don’t want to paint an unnecessarily dark picture, but it really is pretty dark.” Klonsky added that he considered this a low estimate, as “The New Yorker says five percent, that is, over 110,000 wrongly convicted people. There are only 70 innocence projects in the United States.”

Throughout the talk, comments and questions were shared by the crowd, ranging from experiences in the 1970s of interrogation regarding the activist work of individuals on the way to an anti-apartheid conference, to questions regarding the motivations of police officers pushing these charges and using such tactics.

Gyda Chud, emcee of the event, spoke after Klonsky and highlighted one of his quotes of the evening: “The opposite of evil is not good, it is truth.” She continued to say that, “for truth to prevail, people like yourselves [Klonsky] and those involved in the innocence project work … we must thank you for righting these wrongs.”

Klonsky told the Independent about “a case in Louisiana, a football player, African-American kid. He was accused of writing false banknotes, forged banknotes, and the handwriting didn’t match and we were able to get him off.” The “kid” is now married with four children, said Klonsky. “Sometimes, you do things that you don’t have any idea of the effect you are going to have.”

A fundraising speech by Marion Pollack concluded the event. “Outlook has a strong and proud history of voicing dissenting opinions…. It shows that there is an amazing and wondrous reality of Jewish voices,” she said.

Outlook editor Carl Rosenberg said, “The presentation was good, people seemed to enjoy it…. I think it went well.”

Outlook publishes six times a year and offers both a socialist and humanist lens of social justice, Yiddishkeit, ethical humanism and other issues. For more information, visit outlookmagazine.ca.