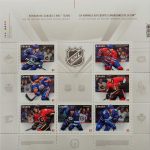 In 2012, Avi Dunkelman and his business partner, Joseph Gault, won a five-year contract from Canada Post to create a postage stamp series celebrating 100 years of the National Hockey League. (image from Avi Dunkelman)

It was as if he had come full circle, when Israeli-born Avi Dunkelman won a five-year contract from Canada Post in 2012 to create a postage stamp series celebrating 100 years of the NHL, focusing on the seven Canadian teams in the league.

Dunkelman was born in Haifa in 1954 and, at an early age, started collecting the stamps from the postcards his father sent him on his travels in Europe. The stamps gave Dunkelman a great appreciation for graphic design, so much so that he opted to go to art school.

“After I finished my military service, I decided to see if I could get some work in graphic design,” he told the Independent. “I soon realized that what I had learned in high school was not enough. I needed to study this very seriously in order to make a career out of it.”

Dunkelman first thought to pursue his studies in the United States but, as all of his mother’s family lived in Toronto, he chose to go there to study for a year. During this time, he also worked on improving his English language skills, with the intention of continuing his studies in the States.

Three weeks after he arrived, in 1977, he was attending Ontario College of Art and Design. He then pursued a post-graduate degree in Switzerland, at one of the top graphic design schools in the world at the time – they only accepted eight students per year.

In 1984, he made his way back to Toronto and got married, opening his own graphic design firm in 1986, called Avi Dunkelman Design Group. In 1987, he began teaching at Ontario College of Art and Design, where he has worked ever since – he’ll be celebrating 30 years there this spring.

“In 2010, I formed a partnership with my business partner, Joseph Gault, who studied with me in Switzerland,” said Dunkelman. “We’ve known each other for 37 years, and decided to form a creative partnership under the brand of Mix Design Group.

“We were invited to compete in designing the stamp for the Year of the Snake in 2011 – we won four design awards for it. In 2012, we were asked to compete on a five-year project celebrating or commemorating the 100th anniversary of the NHL. We submitted our design concept and we won the competition.”

Over the five years, Dunkelman and Gault designed 69 stamps, 32 first editions, about 15 booklets, and all kinds of other materials. It is the largest program that Canada Post has ever tasked.

Dunkelman did not grow up with hockey in Haifa. Instead, soccer was the sport of choice. He recalled, “I saw a glimpse of hockey, but never got to really understand the game like some Canadians do. I don’t know how to skate.

“My business partner is a hockey buff. His father was actually a professional hockey player in Scotland. He’s Canadian-born and grew up playing hockey with his father coaching him. He knows a lot more than I do.

“I think that the fact that I look at it from a layman’s perspective gives us an advantage … looking at things in a different way. And this is what my contribution to this project is.

“The way we work is we sit and brainstorm some ideas,” he said. “Then, we work independently on some ideas, designs, get together, analyze them, and decide what works and what doesn’t.”

One of the biggest challenges for Dunkelman was working with six different player photos at a time, editing them so that they work seamlessly together.

“That’s a challenging process,” he said. “If you look at the photograph on the stamp and the original, they sometimes look totally different.”

Over his more than 30-year career, Dunkelman has had to learn how to incorporate computers into the design process. The first computers came onto the scene as he graduated from the school in Switzerland and Dunkelman recalled that one of his teachers received four computers from Steve Jobs as a gift. While not so useful at the time – it was the mid-1980s – as software and computers developed further, Dunkelman began using them in his design process.

“Obviously, I had to adapt to computers, as the technology was growing, too, and going through its own growing pains,” he said. “I’d say I’m not unique in that. I think most designers had to do the same thing. When I was starting out on computers, Photoshop wasn’t around … wasn’t as complex and sophisticated as it is now. So, there were a few things I was integrating at the same time … taking an image, doing something, printing it, re-photographing it, re-modifying it, going back and forth between the computer and the work table.

“By the way, that’s part of the way I teach at school now … because my message to the younger generation is that the computer is not the answer for everything. The idea is not to develop a dependency on it. Depending on the nature of the project and what the opportunities present you with, even today, there are certain things to do in an analogue way.”

Dunkelman works with a production person. “I don’t have the time to get the ins and outs of every little update of software coming my way,” he said. “I try to keep up, but, to do this effectively, I’d need to devote my entire time to it. It’s not feasible for me.”

According to Dunkelman, graphic design has changed a lot in the computer era, opening up opportunities for more people to be in the industry. However, he said, “It’s a little disappointing to me how graphic design in general is going back. A lot of things look the same because people are using the same software, the same tools, fonts and colours. Especially with website design being template-oriented … it’s becoming more about information management and data management, as opposed to creating.”

Dunkelman has a long list of clients, including the Ontario Chamber of Commerce, the Royal Canadian Mint, the University of Toronto and many private companies.

“Right now, I split my time between teaching and working,” he said. “Going forward, the professional work I’m doing is probably going to slowly diminish by choice, while still teaching and being a mentor for the next generation.

“This is one of the things I’m focusing on for my students – mentoring them to a point where I still keep a strong connection with former students who seek advice. They know I’m always available, open and willing to help. This is what I really enjoy seeing – the next generation and my former students getting ahead in their own careers and taking charge of the industry … hopefully, to become leaders.”