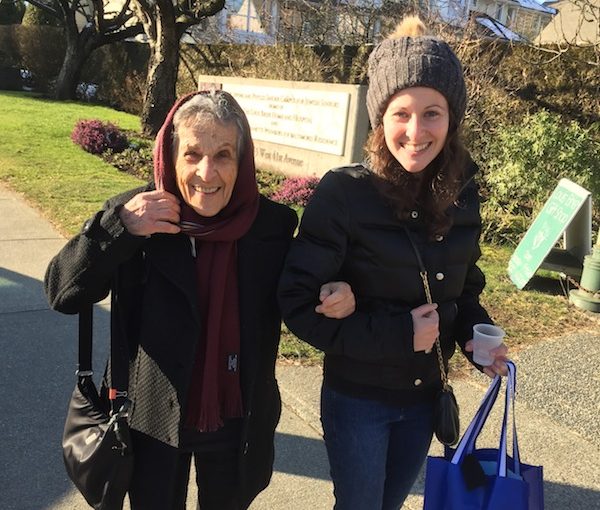 The author with her grandmother. (photo from Becca Wertman-Traub)

In the story of the Jewish people, it is not just about our patriarchs but the matriarchs, too. I grew up knowing that both my grandparents, Babi and Zaida, were Holocaust survivors. Zaida would tell me his stories – I know them backwards and forwards from how he spoke about them. But Babi, who was just 13 when the Second World War began, did not really tell hers.

She did talk about her brother – Shaike – who was taken to his death by the Nazi SS when he came out of the house to help young Frieda carry a pail of water. He was taken to a police station and killed in its basement along with numerous other Jews from the town. And she told us that her father, mother, sister and another brother all perished in the Holocaust. But not much else. She was too busy making blintzes, perogies, chicken patties, chicken soup with kreplach and more for her family.

Thankfully, though, she did have the extreme courage to tell her full story to the University of Southern California Shoah Foundation, where I learned the details of how she survived. Frieda’s childhood home in Kamionka-Strumilowa, Poland, became part of a ghetto. During the liquidation of the ghetto, Frieda and her brother, sister and mother hid in a hiding space in the wall and managed to survive, when the rest of the Jews of the town were taken to their deaths at Belzec extermination camp.

Following the liquidation, the German’s declared the town “Judenfrei,” free of Jews, but Frieda and her remaining family were still there. Since their home was located on the edge of the ghetto, they jumped off the balcony, surpassing the ghetto’s fence, and walked to Busk, a town 30 kilometres away, where they had heard that Jews were still living. They went to the Busk ghetto and lived with an aunt. Frieda’s mother died of typhoid there, and Frieda was left with her brother and sister. Unannounced, the Nazis started liquidating the ghetto, and Frieda again hid but was separated from her brother and sister – she never saw them again.

While in the Busk ghetto, Frieda worked as a gardener for a German man who said, if she returned to Kamionka-Strumilowa, he would help hide her. At the time, Frieda did not believe such a thing was possible and simply mentioned it to her cousins. However, after the liquidation, with no immediate family, she decided to give it a shot and walked back to her hometown by herself. The man took her to the village of Obydiv, where she met Mr. Svets, a Polish farmer. Frieda hid in this Polish farmer’s barn for 12 months and, today, his sister-in-law Janina Pelc is listed among Yad Vashem’s Righteous Among the Nations.

Frieda was one of just 20 from a town of 3,000 Jewish people who survived the Holocaust and lived to tell her story.

And did she live!

Babi and Zaida met after the war and moved to Vancouver in 1949. Babi was always walking, or speed-walking, usually leaving Zaida behind so she could do laps back and forth around him. She just could not sit still, whether it was cooking for her three children and, later, eight grandchildren, or cleaning the entire kitchen with a single square of paper towel – there could never be any waste. I remember sitting at Babi and Zaida’s kitchen counter as a little kid and Babi giving me milk in a tiny shot glass because “if you finish this, you get some more.”

Babi played tennis at Richmond Country Club, exercised at the Jewish Community Centre of Greater Vancouver, and dined at the finest restaurants and cafés in downtown Vancouver.

Even when Zaida passed away, she was not done living. Right up until the end, my dad took her out for coffee.

In September, just a few days before my wedding, we were out for coffee and she took my left hand, looked at me and said, “Is he Jewish? Is he from a good family?” I said yes, and reminded her that she was coming to the wedding.

At 95, she came to my wedding. And she danced at it – to none other than “Od Lo Ahavti Di,” Hebrew for “I have not loved enough.”

Babi appreciated life and everything it had to offer to its fullest, never allowing any of its gifts to go to waste. We mustn’t either.

May her memory be for a blessing.

Becca Wertman-Traub grew up in Vancouver and currently lives and works in Jerusalem.

I must make the disclaimer that none of the letters after my name qualify me to opine on matters of this kind but, as I have done too often in the past, I “rush in where angels fear to tread.” I just feel it is so important for our well-being to have a little bit of this in our make-up. I believe we have to be lucky enough that someone has loved us unconditionally, whether that be a parent, God or a partner. It can arrive from siblings, but siblings are more often competitive than fully loving.

But why is this so important? Because a person who loves us unconditionally is one who is naturally inclined to forgive us for our transgressions. We are hardly likely to get through life without making mistakes. If others we respect are ready to forgive us our trespasses, we are much more likely to forgive ourselves as well. And that, I believe, is a very big deal.

If we can’t forgive ourselves for our mistakes, for our misbehaviours, then we probably don’t like ourselves very much. Indeed, we are probably angry with ourselves most of the time. If it’s true, it shows. Everybody knows the saying, “love thy neighbour as thyself.” If you don’t like yourself, well, look out below!

But suppose you understand that we all make mistakes? Suppose you understand that mistakes are learning opportunities and the great thing is that you can learn to not make the same mistake again. Mistakes are a necessary way to get smarter about organizing your life. You don’t have to beat yourself up about them. Learn your lesson and move on. You are still a person worth loving. And, because you are getting so smart about things, why shouldn’t you appreciate and admire yourself? Your heritage of love gives you strength, self-confidence.

But what if your mistake is unredeemable? Ouch! Those, you just have to live with. And shouldn’t that make you kinder about the mistakes of others, more generous, more forgiving? If you could do such a thing, well, then, it could happen to anybody, couldn’t it? Sure it could! Forgive them as you forgive yourself.

A belief in your essential goodness will aid you when you are confronted with all those essential decisions one has to make in life. How will what I am thinking of doing impact the lives of those I care for? Can I square this action with the kind of person I want to be? Will I still be able to love myself if I do this thing? If not, then I must find another way to accomplish my ends. Loving yourself can mean having that kind of conversation with yourself.

In the past, I often assumed that what advanced my interests would obviously be in the interests of those I cared for, those whose welfare I was responsible for. It was only with the passage of time that I grew to appreciate that I often missed a step in making that calculation. Most decisions turned out well, but some bore costs paid for by others, costs of which I had not the slightest notion. It was only with time that I would appreciate that I had paid a price as well.

In the end, I believe that those of us who have been blessed with a heritage of love are better able to love ourselves and are better equipped to bestow that heritage on others. I think that is a wonderful thing.