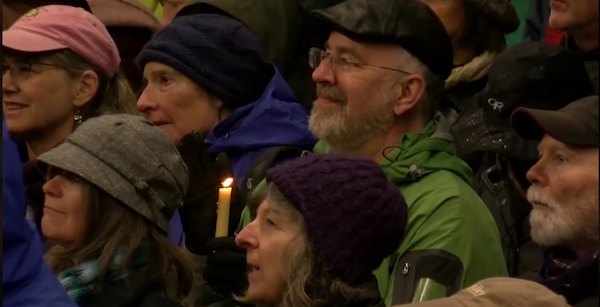 The mass murder of Muslims in two New Zealand mosques last week is a tragedy that transcends words. But, of course, humans being what we are, we need to struggle to try to understand this sort of evil. As a natural consequence, billions of words have been shared, some thoughtful and empathetic, others attempting to score political points off the misery.

No amount of words can turn back time and prevent the horror. Our only way forward is to share our deepest condolences with Muslims in our communities and worldwide, while striving for a better world.

Empathy should be a natural response to Jewish communities in North America, as we can so easily put ourselves in the positions of our Muslim neighbours. In some ways, Muslim British Columbians must be feeling something similar to those feelings experienced by Jewish people after the murder of six people in a Pittsburgh synagogue less than five months ago.

Again, there is no way to turn back time and change history. Lives taken cannot be brought back. But, when faced with an act of such grievous hatred and violence, from which it seems nothing good could ever emerge, there are things we can do to ease the grief and remind survivors and others affected that the world is not defined by the acts of one, or a few, terrible people.

After that act of terror in Pittsburgh in October, many of us experienced feelings of isolation, the sorrowful kinship of being part of a targeted community, the comprehension of how interchangeable we may be with the victims in the eyes of murderous haters. These feelings were eased in small but meaningful ways by acts of understanding and sympathy. Synagogues, day schools, Jewish community centres and Jewish individuals all over the world received notes and other gestures of solidarity and sympathy. A “solidarity Shabbat” that took place the following week saw congregations throughout North America swell with non-Jewish friends who were moved to demonstrate support and friendship.

Likewise, members of the Jewish community and many diverse members of the broader British Columbia community came together at a number of vigils and events in recent days, trying to alleviate the isolation and feelings of being targeted that our Muslim neighbours must be experiencing.

Part of the shock of the attack, which killed 50 people, is that it happened in a place so unaccustomed to hatred and violence of this magnitude. For many Canadians, the murders brought back memories not only of the Pittsburgh attack, which is so fresh in our minds, but also of the Quebec City terror attack of two years ago, when six Muslims were murdered and 19 others injured during a similarly motivated hate crime. Whatever self-image Canadians have as a peaceable people was challenged by that act. Likewise, New Zealanders, who, despite being a world away from us, share much of our colonial and post-colonial history and a common parliamentary foundation, must be coming to terms with the reality that they are not at a remove from the world’s worst ideas and people.

In an era when everyone’s reactions to every event, however monumental or insignificant, can be broadcast to the world through social media, we have seen responses that are beautiful and others that are inappropriate. An Australian senator famously blamed the victims.

Each of us can make a small difference by sending a message to our Muslim neighbours – whether we know them or not. Google “Vancouver (or Richmond or Surrey or wherever you live) mosque” and send kind thoughts to the congregation. Reach out to Muslim friends and let them know that the feelings they are having are understandable.

But there is one other thing. As noted, this is not a time for politicizing. So try to accept this suggestion as it is intended, as a humanitarian, rather than a political, statement: when a community of people is attacked, people of goodwill need to stand with that particular community and, for a moment or whatever length of time seems respectful, avoid universalizing the tragedy.

When elected officials or other well-intentioned people declare that “an attack on Group X is an attack on all of us,” it diminishes the experiences of the targeted group. When Jews were murdered in Pittsburgh, people needed to express (and Jewish people needed to hear) condemnations of antisemitism and words of support. Today, we need to face Islamophobia and white supremacy. We need to express (and Muslim people need to hear) words of support and condemnations of anti-Muslim violence.

There is a time for universal messages of solidarity and unity. In the aftermath of a catastrophe specifically targeting an identifiable group, we need to deal in specifics.

Last week, thousands of Germans of all faiths and identities participated in a “kippa march,” standing in solidarity with German Jews who feel endangered in the current political climate. In 2017, there were 1,468 reported antisemitic attacks in Germany, most perpetrated by members of the far-right.

The gesture is lovely. However we cannot help wondering if the whole “Je suis Charlie,” “We are all Muslims” or the “Ich bin Eine Jude” movements that pop up as gestures of solidarity are not at least slightly misplaced.

We will leave it to others to speak for their communities. But we would note that there may be a degree of comfort among some people in Europe and North America to criticize Jews. Since Christianity is descended from Judaism, it seems that there is felt more freedom to criticize Jewish behaviours, including the policies of the Jewish state. After all, the thinking might go, we are all part of the same family; it’s practically constructive self-criticism. Yet this ignores millennia of significantly divergent experiences and theology.

While the idea that donning a kippa will help keep Jewish neighbours in Germany safe, recent European history should give us reason to worry that today’s gesture of solidarity could be repurposed as a cover for criticism tomorrow on the pleasant idea that Ich bin Eine Jude.

This is a cynical response to a kind gesture, we realize. But sometimes cynicism and realism are not unrelated.