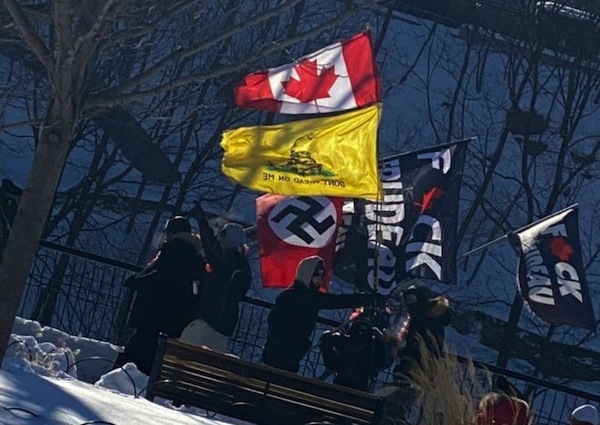 Truckers and others ostensibly contesting government pandemic responses have laid siege to downtown Ottawa. In reality, the protesters seem to have a panoply of grievances, many of which manifest as antisemitic, racist, sexist and just plain obnoxious.

Those noxious traits spread across the country last weekend, as satellite protests took place in Vancouver and other cities. In Toronto, a handbill was distributed declaring that “every single aspect of the COVID agenda is Jewish,” followed by a litany of other antisemitic declarations. This is on the heels of the appearance of swastikas and confederate flags at protests, the appropriation of Holocaust imagery by anti-vaxxers and other inappropriate expressions from COVID skeptics.

The defence, such as it is, from organizers and supporters is that these cases are incidental, represent a minority within the movement and, in effect, should be ignored.

Racism, antisemitism and other forms of hatred should never be dismissed or overlooked. Ideas and images like these must be identified, isolated and removed from any movement that wants to be taken seriously by Canadians. It is no less abhorrent to march alongside people carrying a swastika flag than it is to carry a swastika flag.

Some cases, like waving the Nazi flag, are clear cut and easy to call out and condemn as antisemitism. Other cases, like (we suspect) Whoopi Goldberg’s, are more nuanced. Goldberg’s statement that the Holocaust was not “about race” set off a frenzy. As if more fuel was needed, a jokey recipe she submitted to a cookbook decades ago, called Jewish American Princess Fried Chicken, conveniently resurfaced. All of this seems to have opened a floodgate of previously muted concerns about Goldberg’s appropriation of a Jewish last name and even Jewish identity. Goldberg was called out and suspended for two weeks by her producers.

In fact, Goldberg may have been expressing some combination of contemporary “progressive” understandings of race, which sees a hierarchy of oppression based on skin colour. Before we get too self-righteous about the state of racial dialogue today, remember that a couple of generations of Jewish Americans and Canadians have spent a great deal of effort to downplay differences between ourselves and the (white) majority. There is genuine confusion about Jewishness as a religion, a peoplehood and a racialized group. While it should not always fall on minority communities to school others on issues of identity, neither should our default be to assume ill-will when confusion or ignorance remain possibilities.

While people who wave swastikas may be irredeemable, people like Goldberg – who has expressed solidarity with the Jewish community to the extent that she has said, “I just know I am Jewish” – are a different story. She may be misguided about where Jews fit into today’s conceptions of race and identity, among other things, but her flailing in the midst of the controversy suggests she is confused, not hostile.

There is an alternative to “calling out.” There is a term – “calling in” – through which the opportunity is taken to educate someone who has made an unfortunate remark, to encourage them to learn and adjust their outlook. The process has the potential for turning enemies (or perceived enemies) into allies – and it has worked wonders in countless cases.

Acknowledging intent is critical. Goldberg’s words were poorly chosen and she needs some education. People who wave swastika flags are on another level. Putting on a yellow star because you are asked to vaccinate for the health of yourself and others is contemptible. Handing out flyers blaming COVID on the Jews is as antisemitic as words get. There is a time for calling in and a time for calling out.

The organizers and supporters of the trucker protests need to call out the bad seeds among them. The legitimacy of any movement – whether it be against vaccines, for the rights of a group of people, for protection of the environment, or for whatever other cause – depends on well-intentioned members acknowledging and addressing the presence of those who are motivated by less well-intended objectives, not ignoring them.

And this brings us back to us. It is fine, indeed correct, to call out the hypocrisies of our critics and those with whom we disagree. But we have all been in conversations around the dinner table, on social media, in private messages and emails, where our friends, relatives or guests have expressed unacceptable ideas about others, including fellow Jews who look different or who practise Judaism differently. Racism exists in every community.

If we ask other groups to be vigilant about intolerance in their communities – and to be willing to “call out” or “call in” various comments and actions – we should make sure our own house is in order. We cannot demand that others do this if we do not practise it ourselves. It applies to our critics and enemies. It also applies to ourselves and our friends.