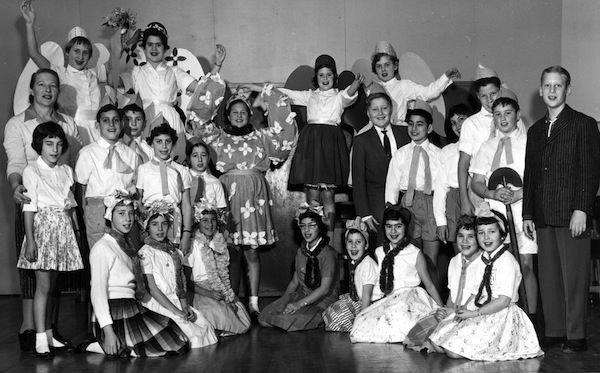 The launch of the Jewish Museum and Archives of British Columbia’s latest edition of The Scribe will be held virtually on Aug. 26, at 7 p.m.  This year’s book features stories, photos and some almost-forgotten details about Jewish education in British Columbia. Join the Zoom to hear from local leaders in Jewish education both past and present who will give context to this significant subject.

Anne Andrew, past principal of Temple Sholom Hebrew School, and Emily Greenberg, current head of school at Vancouver Talmud Torah, will lead the discussion. Andrew will focus on her long involvement with the Jewish education scene in Vancouver and Greenberg will share her perspectives on where Jewish education is headed. Considering the impact teachers, educational institutions and curricula have on the continuity and cohesion of a community, both this panel discussion and this issue of The Scribe speak to important issues.

The 2020/21 Scribe features information from the community archives about Jewish education around the province, spanning some 100 years. In addition, there are oral history excerpts from dozens of community members about various programs that have been offered over those years. Even in the very early days of the Jewish community in British Columbia, no matter where Jews settled in the province, there were all kinds of arrangements for the transmission of Jewish knowledge, culture and identity.

Zoom attendees will hear about iconic educators who instilled a love of Judaism and community spirit. Those who attended Jewish school here will take a trip down memory lane, being reintroduced to teachers from their past.

For more information or to register for the free online book launch event or to get your own copy of The Scribe, visit jewishmuseum.ca/publications/the-scribe or call the museum office at 604-257-5199.

On Nov. 18, the Jewish Museum and Archives of British Columbia held its annual general meeting and JMABC president Carol Herbert gave the following report, which has been edited for length.

What a roller coaster the last months have been! We are most grateful to our three dedicated staff members Marcy Babins, Alysa Routtenberg and Michael Schwartz, who reacted to the pandemic crisis promptly and creatively…. The staff have successfully sought out financial resources from government and granting agencies to allow us to continue our operations, supplemented by the generosity of our members when we put out a special call for donations. We are most grateful to those of you who responded, and especially to those of you who are Sustainers of the Archives.

The board has had a busy year…. We adopted a strategic communications plan prepared by Michael and the development committee, which states our vision and values. We completed and submitted a letter of intent to Federation and JCC to indicate our wish to relocate within the new campus when it is built. The board also endorsed an anti-racism statement, which was posted on our website in response to the troubling events of last summer, and since then has developed a policy on advocacy. A major focus for the board has been the plan for our 50th anniversary celebration of the Jewish Historical Society, which operates as the JMABC….

I have particularly appreciated the support of the executive committee, Daniella Givon, Michael Levy, Phil Sanderson and Perry Seidelman. The finance committee was activated after last year’s AGM, a programs committee has been established…. The Scribe committee has also been active, supporting the production of the 2020-21 issue on Jewish Education in British Columbia: K-12, and reviewing topics for future Scribes…. While we were unable to hold live events from early in March, staff continued to work on expanding the archival collection and preparing the 2020 Scribe, and they have conducted virtual programs…. While we have even been able to sustain some volunteer activity, only 72 hours have been logged since March of the total of 323.5 hours for the year, far less than usual…. Michael and Alysa have been able to recruit terrific students and interns to work with them virtually….

We reactivated the Council of Governors and we are most grateful to the stalwart supporters who serve as advisers to the board. Chaired by our past president, Perry, the council members are Gary Averbach, Isabelle Diamond, Mariette Doduck, Michael Geller, Bill Gruenthal, Richard Menkis and Ronnie Tessler…. We are most grateful to the board members who have continued to serve during these difficult times. We thank departing members Jerry Berkson (2018-20) and Ralph Swartz (2019-20), who served on the finance committee. We also thank Bill Gruenthal, who leaves the board after 22 years of service, though we are very happy that he will continue to serve on the Council of Governors. Three new individuals … are on the board slate….

Helen Aqua is a second-generation, Canadian-born Vancouverite…. Looking back in time has always interested Helen and, at one point, she volunteered as a docent with the Delta Museum and Archives, delivering local history talks to Grade 3 Delta schoolchildren in their classrooms…. After 17 years with Scouts Canada as a cub pack leader, member of the district service team and then the regional service team, Helen returned to school in 1985, earning a diploma in information systems and records management from Douglas College. Many interesting work opportunities resulted, culminating as the office coordinator for Immigrant Services Society’s Drake Street Settlement Services location. Post-retirement … Helen spent four years taking courses on end-of-life studies at Simon Fraser University, which led her to seek qualification as a death doula and then an advance care planning facilitator….

Lianna Philipp grew up in Vancouver and attended Richmond Jewish Day School as well as King David High School. She lived in Kingston, Ont., where she obtained a BComm at Queen’s University and returned to Vancouver to complete her CPA designation. Lianna currently serves on the board of the Jewish Federation of Greater Vancouver and Temple Sholom Synagogue. She is passionate about engaging the next generation of Jewish leaders to help ensure a strong future for our community….

Barb Schober was born in the former Czechoslovakia but grew up in North Delta. She is currently a graduate student in the history department at the University of British Columbia, with a special interest in the history of Vancouver’s Jewish community. She is well-acquainted with the JMABC in that capacity, having made extensive use of the community records during some of her previous work on Holocaust commemoration and Jewish women’s groups. She is working on her PhD thesis, which is about Jewish immigration to Vancouver from Russia and the Soviet Union. She is also the student member of UBC’s faculty of arts Holocaust education committee.

[The AGM marks the official launch of] our 50th anniversary celebration, which will continue throughout 2021. Our first event is the speaker [who] will follow our AGM, Elizabeth Shaffer, who will talk about dialogue and disruption in contemporary museums, particularly in the context of anti-racism and human rights. [See story on page 12.] We will continue with the launch of the 2020-21 Scribe…. Plans are also underway for a photo exhibit from Ronnie Tessler’s fantastic collection that she donated to the archives, for a children’s art contest that we hope will engage young families, and for a gala launch event in November 2021 for the 50th anniversary commemorative book, which will be an overview of 160 years of Jewish history across British Columbia with lots of historical photos…. On our website [jewishmuseum.ca] you will find a sponsorship brochure, which details 50th anniversary and ongoing projects and programs….

Again, let me emphasize that we want every Jewish person in British Columbia to know that JMABC is your organization, keeping the record of community-building that has been accomplished by an array of individuals and families. Our watchwords are diversity and inclusion…. As Perry reminded us every year in his president’s remarks, make sure to seek out your own family stories and don’t throw away family photos and memorabilia. Every one of your stories matters. We will be delighted to interview you so that your oral narrative can be included in our archives – just contact us.

On May 15, the Jewish Museum and Archives of British Columbia launched the latest issue of its annual journal, The Scribe. This year’s edition follows the history of Jewish clothiers in the province, so the museum kicked things off with a fashion show curated by local fashion historian, Ivan Sayers, featuring clothing from the 1940s through to the 1970s. Some of the pieces exhibited were made or sold by clothiers included in the journal, which can be purchased for $20 from [email protected] or 604-257-5199. To see more of the fashion show photos, click here.