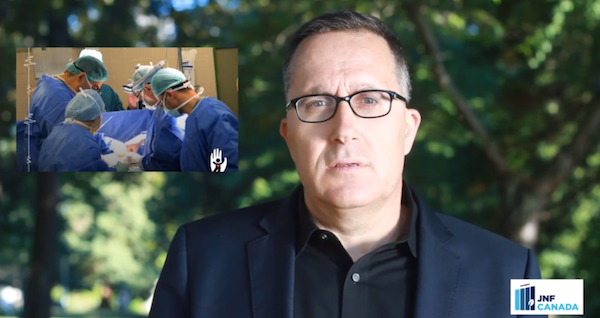 Ayalon Canada Park in the Ayalon Valley is one of the projects JNF supports. (photo by Guy Asiag, KKL-JNF photo archive)

A member of Parliament has agreed to sponsor an e-petition that calls on the government to revoke the charitable status of the Jewish National Fund of Canada (JNF).

This is the first time an MP has lent support to an effort to rescind JNF’s tax-exempt charitable status in Canada and marks the latest development in a long-running battle by those opposed to the JNF’s charitable status.

Quebec NDP MP and national revenue critic Pierre-Luc Dusseault has agreed to sponsor petition E-1999, which, as of this writing [Jan. 21], had garnered more than 1,400 signatures. It went online on Jan. 9 and will close for signatures on May 9.

E-petitions are an official system whereby petitions that are sponsored by an MP and receive 500 signatures will be tabled in the House of Commons. The government must then respond within 45 days.

It was submitted by Independent Jewish Voices of Canada (IJV), which is considered an outlier within the Jewish community, due to its support for the boycott, divestment and sanctions movement against Israel.

On its website, IJV calls itself “a grassroots organization grounded in Jewish tradition that opposes all forms of racism and advocates for justice and peace for all in Israel-Palestine.”

The JNF was recently the subject of a scathing story by the CBC, which reported that the charity was under a Canada Revenue Agency audit for using charitable donations to build infrastructure for the Israel Defence Forces, “in violation of Canada’s tax rules.”

The JNF responded by saying that it stopped funding projects on Israeli military bases in 2016 and that the projects only “indirectly” involved the IDF, because they were for children and youth on land owned by the IDF.

In a subsequent interview with the CJN, JNF Canada’s chief executive officer, Lance Davis, said the charity is working with the CRA on its review and issued staunch defences of JNF’s financial transparency and donor accountability.

The e-petition, which is addressed to the minister of national revenue, says JNF Canada “engages in discriminatory practices, as its landholdings are chartered for exclusively Jewish ownership, lease and benefit, as noted by the United Nations, the U.S. State Department, a former attorney general of Israel and the JNF itself.”

“Notably,” it adds, “the JNF Canada-funded Canada Park was built on the lands of three Palestinian villages destroyed following the 1967 war in direct violation of the Fourth Geneva Convention.”

It also accuses JNF Canada materials of depicting “occupied territory as part of Israel, a representation that runs contrary to Canadian foreign policy and international law.”

It calls on the minister of national revenue to revoke JNF’s charitable status, if the charity is found to violate the Income Tax Act, or CRA guidelines and policies.

It was initiated by Rabbi David Mivasair, a longtime IJV activist now based in Hamilton, Ont. He called the e-petition “part of an ongoing process” to hold public officials accountable.

“It’s incontrovertibly factual that JNF Canada is in violation of Canada’s tax laws,” Mivasair claimed. “It has been for decades. It’s been reported for decades.”

This latest campaign “is not something that I take any pleasure in doing, but feel is morally necessary to be done,” he added.

According to guidelines for MPs, no debate is permitted when a member presents a petition. An MP “may make a brief factual statement (referring to the petition being duly certified, to its source, to the subject matter of the petition and its request, and to the number of signatures it carries), but members are not allowed to read petitions nor are they to indicate their agreement or disagreement with them.”

In 2017, IJV submitted an 85-page complaint about JNF Canada to the CRA and the national revenue minister. That followed many other campaigns designed to pressure federal officials.

This is the first time IJV has submitted a parliamentary petition and it’s “just one way of drawing public attention to this,” said the group’s national coordinator, Corey Balsam. “We’re assuming [officials] will look into it and not much more than that. [But] it’s definitely a big step for our campaign.”

He said Dusseault is “not someone who’s very engaged [in the issue], but he heard the concerns and saw the evidence.”

Dusseault did not reply to the CJN’s requests for comment.

In a statement posted to its website, JNF called the e-petition “as empty and scurrilous as earlier efforts to delegitimize the outstanding work of the JNF and, by extension, the existence of the state of Israel.”

JNF said its outreach suggests “that those who are applying any degree of critical thinking see the petition for what it is and are dismissing it as not worthy of engagement.”