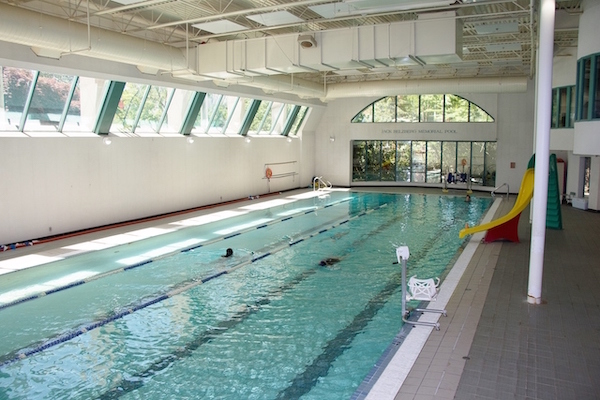 One of the reasons the Jewish Community Centre of Greater Vancouver is being redeveloped is that its amenities, like the gymnasium and swimming pool, are aging. (photo from miss604.com)

The government of British Columbia has announced $25 million to support the redevelopment of the Jewish Community Centre of Greater Vancouver.

At a virtual event April 28, three cabinet ministers and Alvin Wasserman, president of the board of the JCC, publicly shared the major contribution to the $155 million project.

The first phase of the redevelopment, which is what the grant supports, will contribute to the construction of the new, 200,000-square-foot community centre. This will be built on the current JCC parking lot. The new facility will allow the JCC to expand childcare, seniors services, arts and cultural spaces and amenities for all. The centre, when opened, will also be home to about 15 not-for-profit organizations, with expanded space for the Vancouver Holocaust Education Centre, a new theatre, and other facilities. That component is anticipated to be completed in late 2024.

A second phase of the project, which is the largest capital project in the history of British Columbia’s Jewish community, will see the existing JCC replaced with mixed-use rental housing, including units at or below market value. In this phase, King David High School, which is currently located to the east of the JCC, across Willow Street, is expected to move to new, larger premises in the second phase to accommodate growing student enrolment. This phase, expected to be completed in 2027 or 2028, will cost about $272 million.

The redevelopment initiative includes the transfer of the property from the JCC into a community trust, with rent and other revenues being reinvested into the Jewish community in perpetuity.

Melanie Mark, B.C. minister of tourism, art, culture and sport, made the funding official in an enthusiastic announcement.

“The Jewish Community Centre of Greater Vancouver is an integral part of our social and cultural fabric, it’s a vibrant, intergenerational community centre,” she said. “But it was built more than 60 years ago and the facility is in desperate need of replacement. Its amenities, like the swimming pool and gymnasium, are aging. Meanwhile, the community of Oakridge has exploded around it.”

Mark added: “We hope this grant will assist the centre to secure other sources of funding for this project. The redevelopment of the centre is a massive undertaking, leaving a legacy for generations to come, which is why I’m encouraging other levels of government to join us in funding this important project. Specifically, I hope the federal government will step up and match our funding commitment. I hope they see the value in meeting the needs of this growing, diverse community.”

The new JCC’s capacity for increased childcare and the residential components of the second phase dovetail, Mark said, with the government’s commitments to affordable housing and childcare.

Also on hand was George Heyman, minister of environment and climate change strategy, who recalled his teenage years hanging out at the centre. He echoed Mark’s call for the federal government to join the province in supporting the project.

“The Jewish Community Centre is a centre not just for Oakridge and the Cambie Corridor but for all of Metro Vancouver, and has been for years,” said Heyman. “Visitors come from all around the region and from a wide variety of ethnic, cultural and religious backgrounds.”

On behalf of the JCC, Wasserman thanked the provincial officials, all three of whom represent Vancouver ridings in the legislature.

“The centre is in desperate need of replacement,” said Wasserman. “Community needs have hugely outgrown it and, fortunately, we are blessed with options. The centre is in the heart of Vancouver, on land worth more than $325 million. Our community pioneers knew this land would be important for our future needs and that future is arriving…. Thanks to the funding from the province of B.C., we are able to move forward with the plan that will bring benefits to many for many generations to come.”