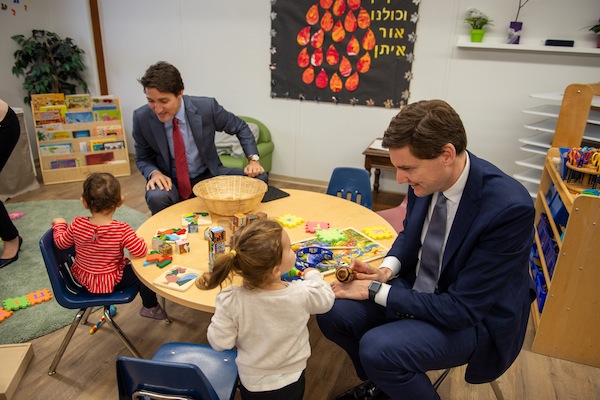 RJDS established its Early Learning Centre this past September, with Sara Solomon as director. (See jewishindependent.ca/rjdss-new-early-ed-program.) It offers two preschool programs, one for infants and toddlers (0-3 years old) and one for children ages 3-5.

Reut Dahan, a parent at RJDS, commented on the government’s reduction of childcare fees, calling it “life-changing.”

“Thanks to this amazing program being implemented, our costs are now reduced by over $1,000 a month, allowing both of us to work full time and easing some of our financial stress,” said Dahan, who has three kids – a toddler, a preschooler and a school-aged child.

Among those from the Jewish community who attended the Dec. 2 event were Ezra Shanken, Jewish Federation of Greater Vancouver chief executive officer; Geoffrey Druker, chair of the Centre for Israel and Jewish Affairs’ Local Partnership Council; Michael Lipton, RJDS board chair; Shannon Gorski, a board member of both Federation and Jewish Family Services; and Federation marketing and communications manager Sara Bandel. In his weekly email message, Shanken thanked RJDS principal Sabrina Bhojani and Lipton for making RJDS’s Early Learning Centre a reality.