Tikva Housing Society is thrilled to share that the Ronald S. Roadburg Foundation has provided a grant of $255,000 to support Tikva’s mission to offer affordable housing solutions to the Jewish community.

“A gift of this magnitude provides help and hope at a time when economic uncertainty is definitely impacting housing insecurity,” said Anat Gogo, executive director of Tikva Housing Society. “The Ronald S. Roadburg Foundation’s tremendous generosity means that we will have the financial resources to build capacity on an operational level. Tikva is on an unprecedented growth trajectory and this gift is critical to support our growing housing portfolio, allowing us to say ‘yes’ to a number of new opportunities on the horizon.”

The need for affordable housing continues to be first and foremost on the minds of many in the Jewish community. This gift will be put to work, empowering individuals and families by providing affordable housing – allowing them to build long-term change in their lives and beyond.

Tikva Housing Society is grateful to the Ronald S. Roadburg Foundation for its partnership in addressing the issue of housing insecurity. Tikva appreciates the foundation’s focus on strengthening the capacity of the community’s organizations and its commitment to tikkun olam, repairing the world.

Vancouver Talmud Torah, Congregation Beth Israel and Jewish Family Services are elated to share with the community that a gift of $100,000 has been received from the Ronald S. Roadburg Foundation to support the Vancouver Jewish Community Garden. This gift enables the building of the garden to begin in earnest and it is anticipated that construction will begin this fall. Thanks to the Jewish Federation of Greater Vancouver’s Transformation Grant and the Diamond Foundation, the garden will be located and built above the shared BI and VTT parkade.

The garden aspires to positively impact many members of the local Jewish community and to be a hub for celebrating and honouring nature, imparting Jewish teachings and values, promoting collaboration, and enhancing the community’s well-being. Studies show that spending time outdoors in nature has been directly linked with lessened anxiety and depression for adults and children alike and helps people better manage stress.

“It is exciting and encouraging to see several important communal institutions come together collaboratively to advance such a positive new opportunity. The Vancouver Jewish Community Garden will be an opportunity to teach community members of all ages about agriculture and the importance of a healthy earth, to enable volunteers to contribute to our community and to help feed those in need. The Ronald S. Roadburg Foundation is pleased to help advance the project towards completion,” noted Bernard Pinsky, Roadburg board chair.

Jewish Federation of Greater Vancouver is delighted to welcome two new members of its team: Gayle Morris and Alisa Farina.

Morris is the new director of the Federation annual campaign, the community’s central fundraising initiative. Building relationships is central to this role, and Morris brings an incredible depth of experience in that area, and so much more. She is an accomplished and multifaceted sales, marketing and business development leader who has extensive experience in both innovative startups and not-for-profit organizations. She is also an active member of the community with extensive volunteer involvement.

Farina has been hired as the child, youth and young adult mental health worker, and Federation is grateful to the Mel and Gerri Davis Charitable Trust for the support to enable the creation of the new position.

Farina holds a bachelor’s in child and youth care and comes to the job from a 25-year career with the Burnaby School District, the last 10 of which she focused on working with high-risk, vulnerable youth and their families. Farina is currently completing her master’s degree in clinical counseling. She grew up in the Lower Mainland and was involved with BBYO and Camp Miriam. 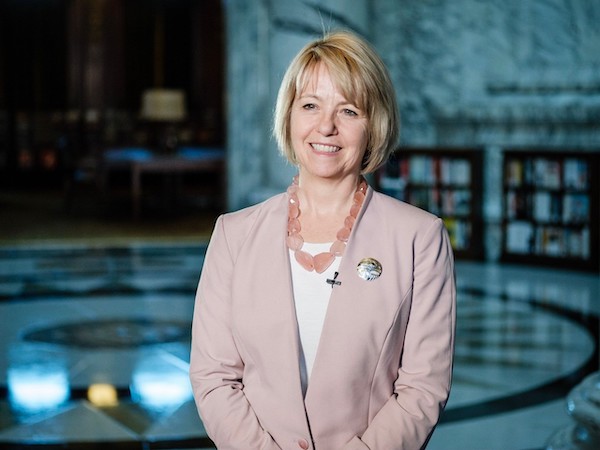 Dr. Bonnie Henry will be honoured at Beth Israel’s gala event May 30. (photo from BI)

Dr. Bonnie Henry will be honoured at the 2021 Congregation Beth Israel gala May 30. The provincial health officer for British Columbia will be given the Keter Ha’bri’ut Award at the virtual celebration.

The term keter ha’bri’ut translates to Crown of Health, and the award has been created “to honour those in the community who have worked diligently, relentlessly and with humility for the betterment of their fellow citizens.”

“The truth is that we couldn’t think of anyone better than Bonnie Henry because, the fact is that she’s literally been a keter ha’bri’ut, a crown of health, for our province in helping to keep us healthy,” said Rabbi Jonathan Infeld, senior rabbi at Beth Israel. “She embodies one of the single most important concepts of Jewish tradition, spreading the word of chesed, of kindness. It’s not only that she cares about the physical health of our province, but I think one of the reasons that she has become famous across the country and the world is because she cares about the humanity of our province as well.”

When the synagogue’s gala committee asked Henry if she would be willing to be honoured by the gala and receive an award, about nine months ago, organizers hoped that the event might be in person or, at least, a hybrid event with some people present and others tuning in virtually.

Instead, the main portion of the event will feature words from Henry, Infeld and others, all virtually, with musical entertainment by Maya Rae. At certain ticket levels, food delivery is included and, for major donors, a pre-event will feature a mixology session, with cocktail kits delivered to the homes of virtual attendees. Henry will share a favourite cocktail recipe of her own.

Henry’s commitment to inclusion and her respect for Jewish traditions impressed Infeld from the moment Henry held her first group conference call with clergy from around the province, about the time the pandemic began.

“One of the things that really touched me,” he said, “was in her very first address to the clergy of British Columbia – I’m not talking about the rabbis, but for the clergy of British Columbia – many, many months ago, as we were entering into the COVID era, she said, we are going to have to have fewer faces and bigger spaces and one of the things that that means is we won’t be able to do in-person shivas for awhile.”

Infeld believes that Henry’s time as associate medical officer of health for Toronto Public Health during H1N1 and SARS outbreaks in that metropolis put her in close contact with the Jewish community there.

Henry’s work is serious, as is the award she will receive from Beth Israel, said the rabbi, but parts of the evening’s program will be lighthearted.

The gala is to be emceed by Dr. Isaac Elias, a young member of the synagogue and a medical doctor who helped guide the synagogue’s response to COVID from the beginning.

The event will be relatively short – about an hour – and partial proceeds will be donated to the B.C. Centre for Disease Control.

While the virtual gala will be an unusual event, Infeld stresses that the shul is no stranger to Zooming. Since the week the pandemic began, he said, the decision was made “to ramp up our programming, not ramp down.”

“We actually have more programming than we have ever had before,” he said. “In the early days of COVID, when everyone was literally shut in, we had teams of volunteers calling and assisting our seniors, we engaged all of our young adults and they were helping deliver food to seniors, helping them with whatever needs they had, technological, food and beyond.

“We also increased our programming. We never had a daily learning [before COVID]. Now, we have a daily mussar class. What used to be a monthly Lunch & Learn became the weekly Zoom & Learn and now is becoming the weekly evening program known as Prime Time BI. A Zoom Scholars series was funded in part by Harley Rothstein and Eleanor Boyle. One of the things that we’ve seen is participation rates in our services online and our online programs are up anywhere from 30 to 100%, and we’ve been able to maintain that.”

Presenting sponsor for the gala event is the Shay (Shy) Keil Group.

“I am thrilled to be the presenting sponsor for this event, both in support of the Beth Israel Congregation and also Dr. Bonnie Henry,” said Keil. “It is an honour to present this award to Dr. Henry for all that she has done during the pandemic, making extraordinarily difficult protocol decisions and becoming the public face of this pandemic. It is a thankless task that she has assumed since March 2020 and I am so happy that Beth Israel has decided to recognize her.”

For tickets to the event, visit bethisrael.ca.

On Feb. 16, Congregation Beth Israel welcomed the first of four renowned Jewish scholars in a made-for-Zoom series, The BI Scholars. Canadian-born Dr. Henry Abramson, dean of Touro College in New York and a specialist in Jewish thought and history, kicked off the series with a talk entitled Becoming the People of the Byte: The Internet, Talmud and the Future of the Jewish People.

His discourse looked at how Jews, over time, and to this day, use and relate to new information technology, and how it changes our modes of learning and disseminating texts. Abramson explained that Jews are generally early adopters of technology, beginning in the second century CE when, under the guidance of Judah Ha-Nasi, we moved from an oral tradition to the documentation of the Mishna in manuscript form, a big change that encountered significant resistance along the way. This was followed by the era of the printing press and, now, digital technology.

These communications technologies allow for significant democratization, and Abramson pointed out the value of the internet in that learning is available to all, whereas “treasured texts were previously not accessible to 50% of the Jewish community – namely, women.”

However, technology also presents dangers in terms of knowing the authenticity and authority of texts. It is our job, said Abramson, “to discover what we can trust and what we can discard.”

One of the female scholars about whom Abramson speaks is Ilana Kurshan, who has completed a remarkable feat of Talmud study – finishing the whole Talmud in seven-and-half years, Daf Yomi, a page a day. Kurshan will speak at the March 9 instalment of the Zoom series about her award-winning memoir If All the Seas Were Ink, which takes readers on a guided tour of the Talmud, while detailing her personal stories of love, loss, marriage and motherhood.

It is, indeed, one of the most unique Talmud commentaries ever written, as she explains: “The memoir is secondary. The way I happened to write this commentary on the Talmud is through my life.”

During her years studying the Talmud, Kurshan, a rabbi’s daughter from Long Island, N.Y., came to discover the terminology to understand her own daily experiences. “Talmud speaks to the human dimension of experience and, in many ways, that does not change,” she said. According to Kurshan, you cannot divorce the human experience from one’s own experience. “Just as the Talmud is a commentary on life, my life became a commentary on Talmud.”

On April 20, Dr. Benjamin Gampel, the Dina and Eli Field Family Chair in Jewish History at the Jewish Theological Seminary, will speak on the topic Riots, Inquisitions and Expulsions, and the Emergence of the Sephardic Diaspora. Gempel is a specialist in medieval and early modern Jewish history.

The series ends with Yuri Vedenyapin from McGill University, whose topic is The Adventures of a Yiddish Teacher. An actor and a singer-songwriter, his areas of academic interest include Yiddish language and culture.