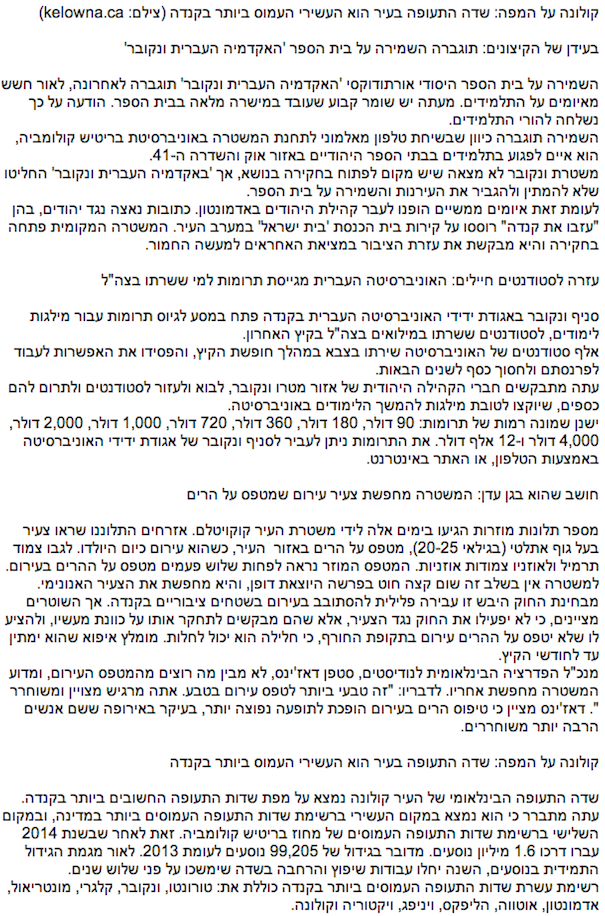 Prof. Shlomo Hasson of the Hebrew University of Jerusalem speaks with audience member Marvin Weintraub after his presentation on Israel’s geopolitical situation. (photo by Cynthia Ramsay)

While Prof. Shlomo Hasson of the Hebrew University of Jerusalem offered some hope that Israel will one day live in peace, he did not offer many reasons to be optimistic about the future of the Middle East.

Speaking to more than 150 people at the Jewish Community Centre of Greater Vancouver on Sept. 4, Hasson put the current geopolitical situation of Israel into context, and discussed four possible futures for the Middle East in general, and for Israel in particular. These scenarios were derived at HU’s Shasha Centre for Strategic Studies, which Hasson heads.

Hasson, who is also a professor in HU’s department of geography, School of Public Policy, and the Leon Safdie Chair at the Institute of Urban and Regional Studies, began by sharing his belief, as a strategist, that, “In every crisis, there is also embedded an opportunity.”

The main issues, he explained, are Israel’s identity as a Jewish and democratic state and its security within recognized (legitimate) borders, the conflict with Hamas and the regional upheaval. The question is which map(s) and policy(ies) can best deal with all these issues (demography, democracy, legitimacy and geography) and what are the driving forces (internal, regional and global) shaping this map.

The dilemma is not new, said Hasson. “We have always asked ourselves, ‘How can we sustain Israel as a Jewish and democratic state with secure and legitimate borders?’” What is new, however, is the context.

According to Hasson, the new aspects of Israel’s dilemma include that the United States doesn’t have a comprehensive Middle East strategy; the cold war in the region (states fighting each other indirectly using proxies, such as extremist groups); the region’s instability (failed states, non-state actors); the increase in criticism of Israel (even by allies) and antisemitism; and the indeterminate results of Operation Protective Edge.

About the war with Hamas over the summer, Hasson divided the results into achievements and failures. Achievements included the devastation Israel inflicted on Hamas, the tunnels it destroyed and the top commanders it killed, the effectiveness of the Iron Dome, the isolation of Hamas, the resilience within Israel and Israelis’ support of the war. On the negative side, he said, Israel did not manage to defeat Hamas; the Israeli government exhibited reactive policy, a lack of creativity and an absence of strategy during the conflict; there were rifts with the United States; the recognition of Hamas as a political actor; and, within Israel, there was bitterness and political division. Hasson questioned whether the war had achieved greater security or served as deterrence.

Hasson went through four predominant opinions on Israel’s possible future, ranging from the Greater Land of Israel to no Jewish state. One of the reasons that progress in achieving agreement is hard, he said, is because people approach it with their own “inevitability assumptions” about such things as to where Israel’s borders should lie: for example, the 1967 borders are inevitable because they stem from moral/progress imperatives, or the Greater Land of Israel borders are inevitable because of a divine promise.

Israel’s decisions and border preferences are not the only ones that will influence its future. Other forces are at work: the super powers (United States, China, Russia, European Union), regional powers (Turkey, Iran, Israel, Saudi Arabia/Egypt), developments in the Arab world, relations between Israel and the Palestinian Authority, as well as developments within the PA.

Hasson highlighted the importance of the Sunni versus Shi’a conflict, explaining some of the possible regional outcomes: national-religious states, democracy, the prevalence of moderate autocrats or the rise of extremists. He said that Israel cannot only focus on its relations with the Palestinians, but must take a broader view, including in its strategizing the Arab world, non-state actors, regional rivalries, and global competition over resources and positions.

He described four scenarios and hypothesized their likelihood.

“Pax Americana,” in which the United States returns to the region as a major actor, the Arab nations engage in democratization and Israel returns to the 1967 borders was one of them. Hasson said, “If you ask me, what are the chances, or the probabilities, of this scenario, I would say … very slim. So, when people talk about the ’67 borders, I share their expectation and I have the highest respect for the people who believe in a two-state solution … unfortunately, the leading driving forces are not taking us in this direction….”

Hasson described both the regional hegemony of Sunnite moderate parties (“a moderate Hamas” may prevail in this scenario) and “clash of civilizations” (between Islamic and non-Islamic forces, but also within Islam, where the extremists will take over) as having a moderate chance of occurring, and the potential for anarchy (with even the superpowers fighting each other) as high.

The Middle East will be unstable for a long time and a two-state solution cannot come to fruition, at least in the short term, he concluded. While a bi-national state might be possible, it is not desirable from Israel’s perspective, he said, and there is a need for another approach.

Hasson recommended that Israel recognize a Palestinian state without recognizing its borders, continue to engage in negotiations with the Palestinians and work toward international legitimacy. If negotiations fail, he said Israel has “to consider the possibility of unilateral withdrawal to defensible borders because we shouldn’t give the Palestinians a veto right over Israel’s existence as a Jewish and democratic state…. So, Israel must ensure its security and international legitimacy but also its demography.”

Hasson, referring to the Shasha Centre scenarios he outlined, predicted that Israel in 2020 will have defensible borders, and that the future will involve unilateral acts by the Palestinians (turning to the United Nations, for example) and Israel (more settlement building, for example) – “there will be mutual adaptation and, from time to time, we will have a cycle of violence in the Middle East. But, currently, we don’t see any prospect of getting to the ’67 borders.”

Epigenetics: environmental effects influence how genes are turned on or off. (photo by Yuval Robichek via wis-wander.weizmann.ac.il)

Blood stem cells have the potential to turn into any type of blood cell, whether it be the oxygen-carrying red blood cells or the many types of white blood cells of the immune system that help fight infection. How exactly is the fate of these stem cells regulated? Preliminary findings from research conducted by scientists from the Weizmann Institute and the Hebrew University are starting to reshape the conventional understanding of the way blood stem-cell fate decisions are controlled, thanks to a new technique for epigenetic analysis they have developed.

Understanding epigenetic mechanisms (environmental influences other than genetics) of cell fate could lead to the deciphering of the molecular mechanisms of many diseases, including immunological disorders, anemia, leukemia, and many more. It also lends strong support to findings that environmental factors and lifestyle play a more prominent role in shaping our destiny.

The process of differentiation – in which a stem cell becomes a specialized mature blood cell – is controlled by a cascade of events in which specific genes are turned “on” and “off” in a highly regulated and accurate order. The instructions for this process are contained within the DNA itself in short, regulatory sequences. These regulatory regions are normally in a “closed” state masked by special proteins called histones to ensure against unwarranted activation. Therefore, to access and “activate” the instructions, this DNA mask needs to be “opened” by epigenetic modifications of the histones so it can be read by the necessary machinery.

In a paper published in Science, Dr. Ido Amit and David Lara-Astiaso of the Weizmann Institute’s immunology department, together with Prof. Nir Friedman and Assaf Weiner of Hebrew University, charted for the first time histone dynamics during blood development. From the new technique for epigenetic profiling they developed, in which just a handful of cells – as few as 500 – can be sampled and analyzed accurately, they have identified the exact DNA sequences, as well as the various regulatory proteins, that are involved in regulating the process of blood stem-cell fate.

Their research also yielded unexpected results: as many as 50 percent of these regulatory sequences are established and opened during intermediate stages of cell development. This means that epigenetics is active at stages in which it had been thought that cell destiny was already set. “This changes our whole understanding of the process of blood stem-cell fate decisions,” said Lara-Astiaso, “suggesting that the process is more dynamic and flexible than previously thought.”

Although this research was conducted on mouse blood stem cells, the scientists believe that the mechanism may hold true for other types of cells. “This research creates a lot of excitement in the field, as it sets the groundwork to study these regulatory elements in humans,” said Weiner. Discovering the exact regulatory DNA sequence controlling stem-cell fate, as well as understanding its mechanism, holds promise for the future development of diagnostic tools, personalized medicine, potential therapeutic and nutritional interventions, and perhaps even regenerative medicine, in which committed cells could be reprogrammed to their full stem-cell potential.