As a former World Jewish Congress Ronald S. Lauder Fellow, I attended the first Ronald S. Lauder Fellowship Diplomacy Summit. The fellowship is an international cohort of top Jewish students with an interest in global Jewish advocacy who are invited to Europe to participate in high-level meetings with government institutions. From the moment I arrived at the summit in Brussels, the excitement felt by the other fellows and staff was infectious.

We began the trip in the European Union offices, hearing from EU members about the state of Europe and advocating for the European Jewish community. This was followed by a visit to NATO. The number of brilliant minds in these rooms was astounding, and it was such a privilege to watch as my small cohort of young Jewish students and professionals posed challenging questions to EU and NATO leaders regarding the state of European Jewry, global antisemitism and recent world tensions.

The same can be said about our visit to UNESCO in Paris the following day. As a media and information studies student with a niche interest in big tech policies, I was intrigued to learn about the organization’s recent report, History Under Attack: Holocaust Distortion and Denial Within Social Media, directly from its writers. I am hopeful that, combined with efforts to address online harms in countries such as Canada, the UNESCO report will spur positive change in hate speech regulation worldwide.

Once the summit concluded, with my Jewish pride at an all-time high, I hopped on a plane to Israel for a much-needed reunion with family and friends, celebrating Shabbat with my great-aunt and others at her beautiful Jerusalem apartment.

After we studied the week’s parashah (Torah portion), a neighbour began to translate a book written in Hebrew by our relative about our family’s history in Israel. Although I had heard these names growing up, I had not fully understood their weight or meaning. It was there, sitting with family and friends, and with the WJC experience fresh in my mind, that I began to appreciate their significance and what my Jewish heritage really means to me.

My great-great-grandfather was Zvi Pesach Frank, chief rabbi of Jerusalem during the end of the Ottoman Empire and the British Mandate of Palestine. He was instrumental in the creation of the Chief Rabbinate of Israel, and in the appointment of Rav Kook (Abraham Isaac Kook) as the first Ashkenazi chief rabbi. I learned more of his historic contributions and my family’s legacy of working to build and protect Israel.

My experience as a World Jewish Congress Lauder Fellow and attending the summit took on a new layer of meaning. Not only am I inspired and committed to continuing my work in global Jewish advocacy, but I have also developed a determination to follow this path, grounded in my profound pride in my family and their accomplishments over the generations.  For that, I am grateful to World Jewish Congress, to my great-aunt and to the Centre for Israel and Jewish Affairs. I look forward to what’s ahead, fully appreciating the rationale supporting my aspirations, and I will hold the summer of 2022 near and dear to my heart.

Following the conference and my visit to Israel, it became clear to me that, in high school – when I found my footing in Jewish leadership and learned more about my intersecting Muslim and Jewish background – I had found the “what” of my life’s passion. It was this summer that I found the “why.”

Tia Sacks is a Vancouver native going into her fourth year at Western University in the faculty of media and information studies. She participated in the World Jewish Congress Lauder Fellowship and is currently the vice-president of the Israel committee at Hillel Western and an intern at the Centre for Israel and Jewish Affairs. 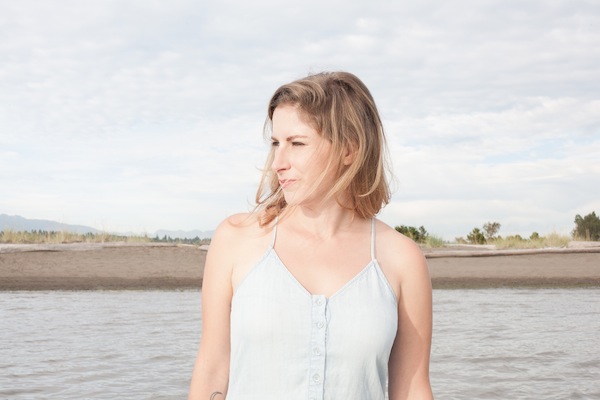 The world première of Leah Abramson’s Songs for a Lost Pod was supposed to be part of this year’s PuSh Festival three months ago. Delayed because of COVID restrictions at the time, it now will debut May 28-29, 7:30 p.m., at Studio T, SFU Goldcorp Centre for the Arts.

Songs for a Lost Pod is a “nine-song cycle [that] makes spectacular use of orca vocalizations, transforming them into rhythmic beats in a musical exploration of historical trauma, environmental crisis and communication between species.” The theatrical production is the most recent development in a process that includes an album by the same name, released in 2017.

“It was just an outward spiral, really. The project started with dreams I had about whales, which turned into researching whales for fun, which then turned into a master of fine arts thesis, an album, a comic book, and now a stage show!” said Abramson when the Independent interviewed her in anticipation of the PuSh festival. “When I made the album, I knew there was so much research and information behind the lyrics and music of each song, and I felt like I wanted people to understand that context, so I made the comic book to highlight some of the research and stories. Then, as I was arranging the music to be performed live, I realized that I wanted people to have that context, too, so I’ve turned the research and background into a script. Then we decided that adding visuals would really help immerse the audience in the material. The project has just been expanding from the beginning.”

Abramson, who grew up in Burnaby, said she has been interested in music from a young age. “My grandma sang in her synagogue’s choir and my dad played the piano, so they tell me it runs in the family,” she said. “But I was also told that music was only for fun, and not a real career, unless you were a concert pianist or something like that. So, I tried to do other things, but I was miserable unless I was making music.

“Over the years, I’ve done lots of touring and playing in bands and teaching, but writing and composing has always been what I love the most. I have pretty varied interests – I’m fascinated by marine biology and I love learning about the environment, as well as human history. The great thing about writing songs is that you can research anything and put it into your work. Right now, I’m really excited about writing music for the stage, as well as choral music.”

Along with her MFA in creative writing (with a focus on lyrics) from the University of British Columbia, Abramson studied classical music at Capilano University, and also has studied traditional Appalachian balladry.

In addition to the song-cycle, Songs for a Lost Pod features the narrative script that Abramson mentioned, which “juxtaposes the whale histories with Leah’s own family and their experience surviving the Holocaust and its aftermath,” according to the program description. “Mind of a Snail’s handmade projections create an impressionistic and largely non-representational visual world to support the songs and narration, guiding the audience into a space of contemplation.”

“When I first started looking into whale histories, the parallels presented themselves pretty quickly,” Abramson told the Independent. “It was not my intention to delve into my family’s past, but, while learning about captures and commercial whaling practices, it was hard not to look at the bigger picture of human behaviour throughout history – aspects of cruelty and destruction that manifest in heartbreaking ways. But also, whales are similar to humans – whale intelligence is extremely high, and whale families are extremely tight knit.”

It was difficult for Abramson to explore her family’s Holocaust history – “the loss and pain are pretty overwhelming,” she said, “and it’s not always easy to find a way forward when that intensity is present. Whale families became a mirror for me, a way to understand and experience intergenerational trauma at a greater distance. The project allowed me to deal with my feelings in a more manageable way, through empathy for another species. And it provided a space for my grief, but also helped me find a way through it. Trauma is so common in families of all different backgrounds. Our ancestors may have lived through wars or other calamities and there are so many people living through these things right now. I think learning others’ stories can help people start to process their own family’s pain, even if the details are different. I felt like whale stories did that for me.”

Credit for Songs of a Lost Pod’s music and lyrics go to Abramson in collaboration with Antoine Bédard, J.J. Ipsen, Andrew Lee (Holy Hum), Aidan O’Rourke (Lau), Sandro Perri, Arliss Renwick and Marten Timan. The program notes that credit also could be given to the A5 whale pod, as the musicians “were given selected A5 pod orca vocalizations, along with Abramson’s other field recordings, to turn into beats and tracks, which formed the backbone of Abramson’s songwriting process, and the rhythms behind much of the music.”

Fellow Jewish community member Barbara Adler also has contributed to the project, and is the show’s narrator.

“Barbara and I have known each other for so long that we can’t remember when or how we officially met,” said Abramson. “It’s like that with people in creative community sometimes – you grow up making art alongside each other. We have shared some special experiences and projects over the years, and continue to work together and in parallel. We have some shared Czech-Jewish roots, which makes Barbara a really good fit for this project in particular. She’s working on a lot of interesting projects of her own, and I’m also happy to be one of her composer-collaborators for Mermaid Spring, which is a musical she’s making with Kyla Gardiner (who also happens to be our lighting designer).

“Barbara has been sending me song lyrics over the last few years, which I have been setting to music. I love working with the characters she has created, and it has truly been a joy to work on those songs. I also really admire Barbara’s artistic process. When she writes, she really digs into all the nuances of a situation or character. She welcomes complexity and the messy underside of creation. I think Barbara balances my impulsivity, and helps me step out from the shadows in my shyest moments. She’s also a great performer!”

Co-presented by Music on Main and SFU School for the Contemporary Arts, tickets for Songs for a Lost Pod ($15) can be purchased from musiconmain.ca/event/songs-for-a-lost-pod.