I was honoured with the opportunity to chant the first aliyah for the Torah portion Aharei Mot. I’m still new to chanting Torah, so I practise every day. I can read and translate Torah but, for some reason, I didn’t reflect on what I was reading at first. I was chanting that very sensitive set of instructions given from G-d to Moses to pass along to his brother Aaron.

A few weeks ago, we read in Leviticus 10:1-7 that Aaron’s sons Nadav and Abihu offered “strange” or “alien” fire. Their sacrifice was overeager and unusual. They drew “too close” – in some readings of Leviticus 16:1 – to G-d and were struck down. They were killed.

After the death of Aaron’s sons, the instructions Moses passes along to Aaron are crucial. He isn’t to go into the Holy of Holies, behind the curtain, because G-d dwells in a cloud above the cover. Aaron’s sacrifices and his approach to the holiest spaces are scripted, careful and correct. When reading rabbis’ commentaries on this, their thoughts are all over the place, from quoting Sting’s lyrics “Don’t Stand so Close to Me” to talking about vulnerability and the divine. This is a text that has a lot to unpack.

As a freelancer, I do writing and editing jobs with various deadlines. Sometimes, I write a piece months in advance, submit, and hear nothing back until the publication arrives in the mail with payment. With other jobs, I get to revise and review copy edits, the editor says exactly when the piece will run and I’m paid early without prompting. Others require me to submit an invoice or I don’t get paid at all. Every gig is different. I’ve even worked for publications that have gone bankrupt before my article was to appear. So, I did all the work but, in the end, received nothing, not even a publication credit.

In other situations, I write or edit something with a short deadline. These can be very satisfying jobs that happen quickly. Sometimes, it’s a political analysis piece that runs in the newspaper. Other times, it’s a healthcare editing job that might improve the lives of breastfeeding moms. There’s a thrill to a tight deadline where I manage to get it done, and perhaps make a difference.

Before Passover, I submitted some queries (ideas) to a publication with which I’d worked before. I got a very fast response. The editor said she’d been about to write on one of these topics. Would I cover it instead? I said sure, asking for her outline and any other details she wanted included. Instead, she suggested I write it on my own, without her outline. I did this as fast as I could, as I also faced the hard deadline of cleaning and cooking for the holiday. I asked for quick feedback, since my time was limited, but I didn’t receive any.

Almost a week later, the editor asked me for revisions, asking why I didn’t include several items, which were on her mental checklist, unbeknown to me. I didn’t feel prepared to do it, but I researched and did one more rewrite before Pesach.

During the middle of the Passover, the copy edits arrived. I’d never seen so many before! Much of it seemed to ask me to prove mundane things with academic sources. Many copy editors have provided me with corrections and solutions over the years, and it’s usually just an “approve” track changes or a comment or two to move ahead. Responding to these comments took nearly three hours. I felt as though perhaps I’d written something wrong, although I’d been researching, writing and teaching on the topic for years.

The next day, I received a note from the editor. It would take too long for us to come to agreement over the edits. I was sent a “kill fee.” A kill fee is usually a quarter to a third of the amount agreed to for the whole project, if the project cannot go forward. This was a bit of a relief. I had more time for the holiday. I could be done with a hassle that already had earned me less than minimum wage.

Moments after I accepted the kill fee, the editor was on social media, writing glib jokes about the article topic and how she had to write the article herself. So, not only had I lost the gig, but there was some shame now, too. This was public “punishment.” Somehow, I’d been incapable of writing on this supposedly easy topic. With the holiday’s end and Shabbat approaching, I had ample time to reflect on the crummy experience.

For context … in the book Little Women, published more than 150 years ago, the character of Jo March is offered a $100 US prize payment for a story she wrote. I was offered $150 Cdn to write this story and paid a kill fee $50 Cdn.

When I thought back on Aaron’s painful loss of Nadav and Abihu, and how they’d been warned not to do things the wrong way, I wondered what lessons I could find there. I don’t make sacrifices at an altar. I never want to lose my children in such an awful way. However, on a much smaller scale, I pushed myself too hard to meet an elusive last-minute work goal. It cut me close when I failed, and then to be shamed via social media for it. I had my work “killed” – perhaps because my writing failed to come close enough to the editor’s ideas, or maybe because it was a little too detailed or uncomfortable and they questioned it. Who knows? Just as we will never know what Nadav and Abihu were thinking, I couldn’t be inside this editor’s thoughts either.

Unlike Aaron, I don’t have to work with this editor/client again. Aaron serves G-d, and cannot make the same mistakes his sons did. He is in a painful place where he must learn to do better. I, too, am in a place where I need to reconsider how I work and what I will work towards.

Luckily, I didn’t lose anything so precious as did Aaron. I can still explore how to make things better – it’s important to find a work/life balance that works, because that article was not worth the hassle. As the TV advertisement goes, some (important) things, like our family and holiday celebrations, are priceless. 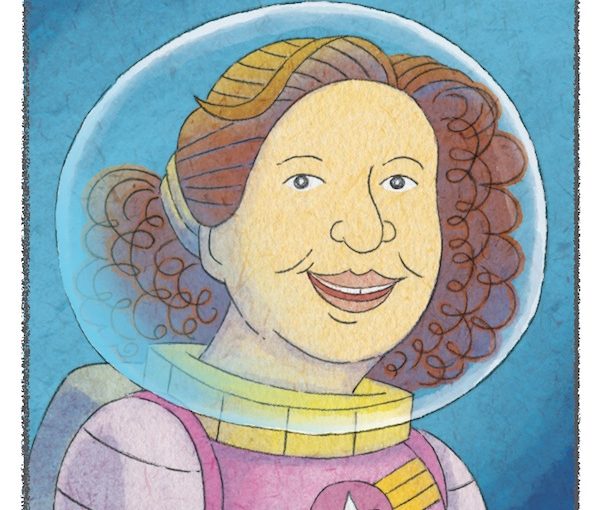 A new Jewish children’s publisher is set to launch in Seattle. The brainchild of children’s author and educator Brianna Caplan Sayres, Intergalactic Afikoman will officially release its first book on Feb. 11.

Sayres is a fourth-generation Seattleite. Her bestselling series Where Do Diggers Sleep at Night has sold hundreds of thousands of copies. Illustrated by Christian Slade and published by Random House, Sayres said the series was inspired by a question from her then-2-year-old (who just celebrated his bar mitzvah) about where dump trucks sleep at night.

Her latest children’s books explore territory far from earth. Night Night, Curiosity (Charlesbridge), illustrated by Ryan O’Rourke, is about a young girl who imagines herself on board the rover Curiosity as it explores the planet Mars. Asteroid Goldberg: Passover in Outer Space, illustrated by Merrill Rainey, is one of the books to be published by Intergalactic Afikoman. In this story, a young Jewish girl gets stuck in outer space for Passover, so she plans a celestial seder.

Sayres is a graduate of Brandeis University in Massachusetts and an award-winning Jewish educator – recipient of the 2016 Grinspoon Award for Excellence in Jewish Education.

“I realized that I had a vision for what I wanted to see in Jewish children’s books,” she said about why she decided to establish the new publishing house. “One day, I sat down at my computer and a mission statement just started pouring out of me.”

Her vision includes publishing genres that are not frequently seen in the Jewish book world, including fantasy. She also wants Intergalactic Afikoman to be known for publishing humorous books – “The word zany often comes to mind,” she said.

However, the primary goal of Intergalactic Afikoman is “readability,” she said. “We are aiming to publish books that children re-read again and again.”

She added that the word “intergalactic” also “signifies the out-of-this-world quality we are going for with every one of our books – from the text to the illustrations, it all has to be absolutely stellar,” she said.

Aside from Asteroid Goldberg, Intergalactic Afikoman will be releasing Such a Library! A Yiddish Folktale Re-Imagined, written by Jill Ross Nadler and illustrated by Esther van den Berg. “Both of these books exemplify the type of fun, humorous and unique books that Intergalactic Afikoman is aiming to publish and both of them feature illustrations that are absolutely out of this world,” said Sayres.

“Make sure to look closely at Such A Library! A Yiddish Folktale Re-Imagined,” she added. “There are so many wonderful and funny details hidden in Esther’s illustrations.”

In addition to publishing these two books, Sayres said, “Intergalactic Afikoman is planning to do our own small part to help fight hunger by donating 10% of the net profits from each book sold to Northwest Harvest, Washington state’s own statewide hunger relief agency whose vision is ending hunger in Washington.” She explained that this commitment embodies the principle of feeding the hungry that is a fundamental element of the Passover seder.

Sayres, who has deep roots in Seattle, said she is “thrilled that our publishing company is based in Seattle, which is a literary hub of the Pacific Northwest, with many wonderful independent bookstores, an incredible children’s writing community and a thriving literary community.”

She said she is also “very happy to let the world know that, yes, there are Jews in Seattle.”

Sayres intends to publish just a few books a year to start and will be looking for both picture books and middle-grade novels from writers and illustrators from around the world.

“Our goal is to publish the absolutely best quality of Jewish children’s literature, so we are eager to consider all submissions,” she said, pointing out that one of Intergalactic Afikoman’s upcoming books is I Am Hava: A Song’s Story of Love, Hope and Joy by Freda Lewkowicz, who is from Quebec

“Of course, we would be thrilled to publish children’s authors from the wonderful Vancouver writing community,” she said.

Sayres also is looking forward to teaching a session at this year’s Limmud Vancouver, which takes place Feb. 29-March 1 at Congregation Beth Israel. For more on the class and the full LimmudVan schedule, visit limmudvancouver.ca.