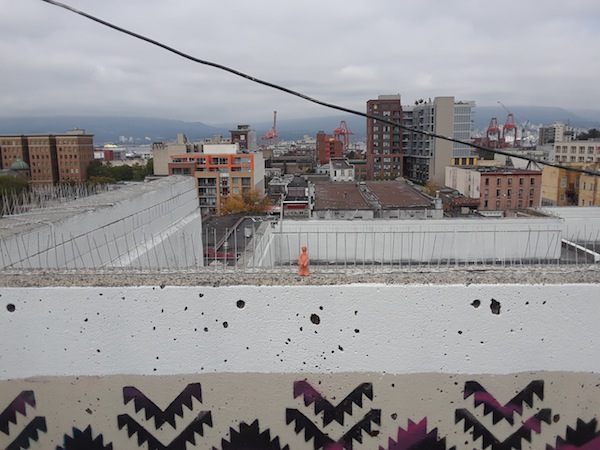 This year’s Downtown Eastside Heart of the City Festival, which runs Oct. 27-Nov. 7, includes the screening of short videos from Jumblies Theatre and partners on the theme of “social goodness.”

Jumblies’ multi-year Grounds for Goodness project is an artful exploration of why and how people sometimes act in good ways towards each other. As it has adapted to community-engaged art-making during pandemic times, this project has generated a varied and whimsical collection of short videos with communities and artists from around Canada.

At the Nov. 1, 4 p.m., online event Finding Grounds for Goodness, hosted from Toronto by Jumblies staff, a sampling of these short films will be shared, including the première presentation of Finding Grounds for Goodness in the Downtown Eastside, which was created during last year’s Heart of the City Festival with DTES creative community members and Vancouver and Toronto artists.

Jewish community member Ruth Howard is the founder and artistic director of Jumblies Theatre, which makes art in everyday and extraordinary places with, for and about the people and stories found there. The Jumblies project was originally inspired by the history about the rescue of Albanian Jews during the Second World War by Albanian Muslim people.

Composer Martin van de Ven, an expert in klezmer and Jewish music, who has been involved in many Jumblies projects, told the Independent, in an interview last year about the DTES’s Grounds for Goodness, about besa, “an Albanian Islamic concept about hospitality and the need to help and protect guests and those in need within and beyond your community.

“In Albania,” he explained, “during the Second World War (and Italian and then Nazi occupation), this meant that almost all Jewish people living and finding refuge in Albania were sheltered and hidden, and Albania ended up with a larger Jewish population at the end of the war than at the beginning.” (See jewishindependent.ca/highlighting-goodness.)

The festival at large

The 18th Annual Downtown Eastside Heart of the City Festival is presented by Vancouver Moving Theatre in association with Carnegie Community Centre, the Association of United Ukrainian Canadians and a host of community partners. It will feature more than 100 events throughout the DTES and online.

This year’s festival theme, “Stories We Need to Hear,” resonates today as people grapple with the dramatic impact of the pandemic, ongoing displacement, the fentanyl crisis, and the reality of bigotry and systemic racism.

In the words of late DTES poet Sandy Cameron, “When we tell our stories we draw our own maps, and question the maps of the powerful. Each of us has something to tell, something to teach.”

Elder and activist Grace Eiko Thomson reads from and talks about her book Chiru Sakura (Falling Cherry Blossoms), which chronicles her and her mother’s journey through racism, and Eiko Thomson’s advocacy for the rights of Canadians of Japanese ancestry. In My Art Is Activism: Part III, DTES resident Sid Chow Tan shares videos from his archival collection that highlight Chinese Canadian social movements and direct action in Chinatown, particularly redress for Chinese head tax and exclusion. And the ensemble Illicit Projects presents Incarcerated: Truth in Shadows, three shadow plays dedicated to people who have faced unjust treatment in Canada’s incarceration system.

– Courtesy Heart of the City Festival