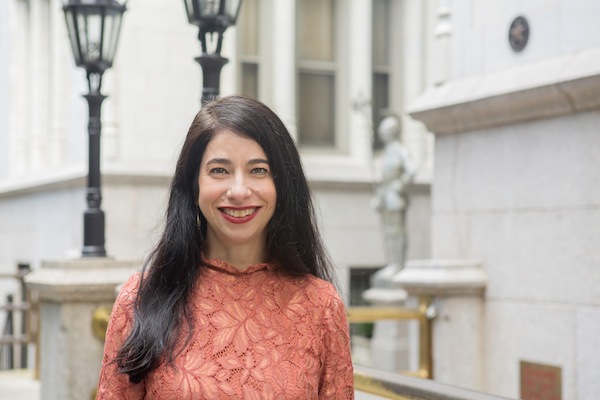 Although the Srebrenica genocide – the killing of more than 8,000 Bosnian Muslims by Bosnian Serb forces in July 1995 – occurred more than 20 years ago, it still affects the people of Bosnia and Herzegovina every day, according to Dr. Laura Beth Cohen, director, Kupferberg Holocaust Centre, Queensborough Community College, City University of New York.

Cohen was in Winnipeg on March 8 to speak as part of the Mauro Centre for Peace and Justice: Brown Bag Lecture series. She spoke on the topic Conflicted Walls: Untangling Transitional Justice and Traumatic Memories at Bosnia’s Memorial.

“There was an opportunity to participate in the first fellowship called Summer University Srebrenica and so I decided to go,” Cohen told the Independent. “I learned very quickly – that was in the summer of 2010 – that, to really understand Bosnia, it was not enough to take a course and learn about it from books. It’s very important to understand what’s actually happening there, and the best way to do that is to actually go there. It’s a place with intense beauty, legacy and a wonderful history of different ethnic groups coming together, living in harmony.”

But, the legacy of the last war, which lasted from 1992 to 1995, is still very much present. In fact, she said, the current government is debating about it.

“Here, in America, we talk about the Second World War as if it’s confined to the past,” said Cohen. “But, in many places in Europe, the Second World War, that memory, is very much alive. And, once you’re in an environment like that, it really starts to help you, not only sort out what has taken place, but you can see … because you’re not part of that country, or you don’t belong to that population … you can start to see different ways that those memories of the past are interacting in contemporary life, and are incredibly problematic.”

When Cohen was in Srebrenica, she was taken by how much the memory of the genocide affects the surviving population, how much it is fought over. The country and government are split into two ethnic entities that are a result of the Dayton Accord, which was signed after the massacre in Srebrenica. One side was deemed the perpetrator; the other, the victim.

This, of course, makes it very difficult for the residents of Srebrenica and the region to move forward, she said.

“It’s a place that would really benefit from having a lot of people just step away … and allowing the population to just live, move forward, and gain attention for things that they really need support with – economic relevance, additional support for education, and rebuilding parts of the community,” said Cohen. “But, with the memory so volatile and kept alive, it really overshadows what’s taking place there. You can imagine trying to raise your family, regardless of your ethnicity, in a place where the past is constantly looming, and it’s a grotesque past. How do you bring your children up in that world?”

According to Cohen, the constant and continued fight over the politics and memory of what happened at Srebrenica does not allow people to learn about what happened or why, and that this is preventing coping mechanisms from being put into place; mechanisms that could help stop other massacres from happening.

“We only focus internationally once a year – on July 11, during the annual commemoration of the Srebrenica genocide that takes place at the memorial – so we often don’t understand what’s taking place there the other 364 days of the year,” said Cohen.

“People visit the 9/11 memorial in downtown Manhattan. They visit Auschwitz-Birkenau in Poland. They visit Kigali Genocide Memorial [in Rwanda]. These memorials serve as an educational component. For local residents and national citizens of these countries, they also serve as places of memory making,” she said.

In Srebrenica, Cohen hopes to eventually see ways of involving the local community in dialogue initiatives that facilitate the creation of memorials, ones that speak to the locals, helping them repair their communities.

“While we, as Jews, have a view of what Auschwitz-Birkenau is, to the people of Poland, it’s a German extermination camp on Polish soil,” said Cohen. “And, to the local people in Oswiecem, which is the Polish name of the town that the camp was built by, they struggle with having that kind of site in their community.”

When it comes to Srebrenica, she said, “We get stuck in the conversation of the politics over the genocide and what happened. What then happens is, a lot of these issues play out at the memorial. Part of this conversation is theoretical, but part of it is to help us understand that these are not static locations. They are very much interactive places, where memories are not only being promoted, but shaped by the larger discourse where they are situated.”

Cohen said the part of Bosnia, Herzegovina and Srebrenica that has always drawn her is “not only the friends I’ve made, but a vibrancy of life in Bosnia that gets lost in the discussion. The culture is beautiful, the people are beautiful, the relationships that people have with each other are beautiful. And, despite all of the horror of the last war, and despite all the history, and the Second World War and before that, it’s a place where there’s a lot of love and a lot of hope. That’s something that keeps, especially, international activist scholars engaged in what’s taking place there … and that, we can’t lose sight of when we talk about all the politics and things that aren’t going well.”