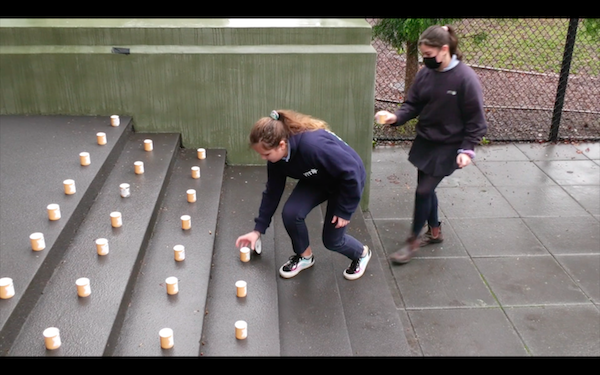 Vancouver’s city hall, the Burrard Street Bridge and other landmarks around the city were lit in yellow light Jan. 27, as were buildings across the country, to mark International Holocaust Remembrance Day. The commemoration coincided with the 77th anniversary of the liberation of Auschwitz.

Yellow was chosen, said Vancouver Mayor Kennedy Stewart, to reflect the colour of the candles of remembrance being lit globally to mark the day.

“Antisemitism is on the rise around the world,” the mayor said before reading a proclamation on behalf of city council. “Vancouver has the opportunity to join with the Jewish community and all of our residents and Canadians from all walks of life in demonstrating our commitment to stand against antisemitism, hate and genocide.”

Kirby-Yung spoke of calls from constituents who have had swastikas drawn on their sidewalks or who have come across antisemitic graffiti in local parks.

“I’ve seen firsthand, when you go to work out at the gym or community facility, the need to post security guards, to have them at schools and daycares, at synagogues during times of worship,” Kirby-Yung said. “It takes all of us individually to stand up to discrimination. We need to continue to work together, collectively with our Jewish community, to ensure safety and inclusion for everybody.”

The Vancouver event was sponsored by the Centre for Israel and Jewish Affairs (CIJA), the Vancouver Holocaust Education Centre (VHEC) and the Jewish Federation of Greater Vancouver.

“Antisemitism is not just a Jewish problem, it affects us all,” he said. “Only by working together and standing up against antisemitism are we going to insulate all Canadians against the threat of hatred and racism in our society.”

Nina Krieger, executive director of the VHEC, noted that education about the Holocaust is at the heart of her agency’s mission.

“This mission is perhaps more urgent than ever as globally and in our own backyard we are encountering a rising tide of Holocaust denial and distortion,” Krieger said. “The latter includes actions or statements that seek to minimize, misrepresent or excuse the Holocaust. These assaults on the memory of the most well-documented genocide in history should raise alarms for all citizens of our diverse society. Online or offline, intentional or not, distortion of the Holocaust perpetuates antisemitism, conspiracy theories, hate speech and distrust of democratic institutions, all of which have reached new heights during the pandemic. Around the world, opponents of public health invoke Nazi policies to systematically persecute and murder Jews and others in order to depict themselves as victims and their governments as persecutors. Such outrageous comparisons are clearly inappropriate and deeply offensive to the victims and survivors of the Holocaust.”

Dr. Claude Romney, a child survivor from France, spoke of her father’s survival during 34 months in Auschwitz – an unimaginable expanse of time in a place where the average life expectancy was measured in days. (Romney’s experiences, and those of her father, Jacques Lewin, were featured in the April 7, 2017, issue of the Independent: jewishindependent.ca/marking-yom-hashoah.)

Shimon Koffler Fogel, chief executive officer of CIJA, said the day of remembrance is intended to be as much “prospective as it is retrospective.”

“As we remember, we also reaffirm our resolve to combat the hatred that still plagues our world today, perhaps more so than at any time since those dark days of the Shoah,” he said. “There is an urgent imperative to sound an alarm and refuse to let its ring be silenced. Hate is no longer simmering in dark corners, relegated to the discredited margins of civil society. It has, in many respects, increasingly asserted itself in the mainstream public square. It has become normalized.

“Countering hate speech is both a necessary and essential imperative to preventing hate crime,” he said. “So let us resolve, collectively here today and across this great country, to give special meaning to our remembrance by fulfilling the pledge, ‘never again.’”

Israel’s ambassador to Canada, Ronen Hoffman, told the audience that his grandmother’s entire family was murdered in the Shoah. He denounced the misuse of that history.

“Any claim, inference or comparison to the Holocaust that is not in fact the Holocaust only acts as a distortion to the truth of what happened to the victims,” he said. “Invoking any element of the Holocaust in order to advance one’s social or political agenda must be called out as a form of distortion and, indeed, denial.”

Germany’s ambassador to Canada, Sabine Sparwasser, noted that, in addition to the anniversary of the liberation of Auschwitz, it was also recently the 80th anniversary of the Wannsee Conference, where the “Final Solution” was devised.

“No country has a greater responsibility to learn from the past and to protect the future than Germany,” she said. “Remembrance is the only option. This sacred duty is the legacy of those who were murdered and of those who survived the horrors of the Shoah and whose voices have gradually disappeared. The greatest danger of all begins with forgetting, of no longer remembering what we inflict upon one another when we tolerate antisemitism, racism and hatred in our midst.”

Other speakers included Ahmed Hussen, minister of housing and diversity and inclusion; the American ambassador to Canada, David L. Cohen; Mayor Jim Watson of Ottawa; Andrea Freedman, president and executive director of the Jewish Federation of Ottawa; and Dr. Agnes Klein, a survivor of the Holocaust.

Adi Shapira, 16, is an up-and-coming athlete in the sport of archery. In Grade 10, she is part of the SPARTS program at Magee Secondary School, which is open to students competing in high-performance athletics at the provincial, national or international level, as well as students in the arts who are performing at a high level of excellence.

Since being introduced to archery only 18 months ago, Adi has climbed in the ranks, winning two gold medals in the 2018 B.C. Winter Games in the cadet category (15-17 years old) of Olympic recurve bow.

On Nov. 24, Adi won the qualifying tournaments against other female archers ages 15 to 20 and will be representing the province of British Columbia in the female recurve category in the Canada Winter Games in Red Deer, Alta., in February 2019.

The games’ website notes this is “the largest multi-sport and cultural event for youth in Canada and the largest event to be hosted in Red Deer’s history.” It will feature more than “150 events in 19 sports and a major arts and cultural festival” and welcome “up to 3,600 athletes, managers and coaches and more than 100,000 spectators.”

Awardees of the Carter Wosk Awards in Applied Art and Design were honoured for their creative excellence at the 14th annual awards presentation Nov. 29. Bill Pechet, the architect for the restoration project of the Jewish section of Mountain View Cemetery and the renovation of the Schara Tzedeck Chapel and grounds, received the 2018 B.C. Creative Achievement Award of Distinction.

Pechet has dedicated himself for more than 30 years to creating environments that bring people together in refreshing and unexpected ways. He has made his mark on public spaces across the country through his street furnishings, lighting, urban infrastructures, public art and memorial design. Many of his contributions can be found around the Lower Mainland, including seating and lighting on Granville Street and the Shipyards in North Vancouver. In all his projects, he has extended the possibilities of merging social space with sculptural invention and sound ergonomics.

Since 2000, as a faculty member of the architecture and environmental design programs at the University of British Columbia, Pechet has encouraged his students to consider how manners of contemporary urban social practice intersect with material and spatial invention, all impacting the experience of the built world.

As an artist and mentor, Pechet frequently lectures on the critical role that public space plays in healthy and vibrant cities. His work emanates from a desire to generate a generous sense of simultaneous recognition and pleasurable strangeness in the public realm, giving individuals the permission to see the world as a little bit wondrous.

The Carter Wosk Awards for Applied Art and Design celebrate British Columbians who, through their creativity, contribute to the cultural economy of the province. Each year, up to three recipients are chosen by jury and each is awarded $2,500. This year, the winners were Afshin Mehin (wearable technology), Henry Norris (furniture design) and Claudia Schulz (hat design).

The awards honour excellence in art with a practical or functional application and are named in honour of philanthropist, academic and visionary Dr. Yosef Wosk and for educator, designer and curator Sam Carter.

On Dec. 9, at the Centre for Judaism’s public menorah lighting at Semiahmoo Shopping Centre in South Surrey, the 2018 Young Lamplighter Award was presented to Simoana and Ethan Dreyshner for their dedication to community and those less fortunate. They have raised funds and given of their time and energy to various important causes, including the Jewish Food Bank, B.C. Lung Association, First Call B.C. and the Louis Brier Home and Hospital.

Cantor Yaakov Orzech lit the menorah and led the Chanukah songs, and Adina Ragetli played the harp. In the “human menorah” presentation (written by Simie Schtroks as a response to the Pittsburgh shootings), Louise Stein Sorensen, Moshe Fidelman, Joanne Yaakov, Marat Dreyshner, Ettie Shurack, Ethan Dreyshner, Bayla Shurack and Schtroks each kindled a flame with a message. Dean Donnelly entertained the children, and winners of last year’s Lamplighter, Emily and Jessie Miller, were there to pass the torch forward.

On Dec. 2, the first night of Chanukah, the Ohel Ya’akov Community Kollel hosted its Annual Latke Vodka party at the Maple Grill.