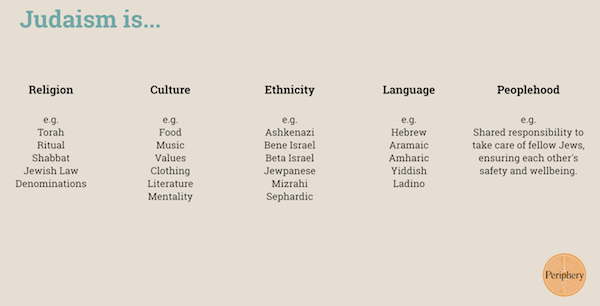 A page of the Intro to Judaism booklet that can be downloaded as part of the Periphery curriculum, which offers a framework to talk and learn about diversity within the Jewish community.

“Make space for a productive and respectful conversation” – this is the first suggested action to frame the use of the recently released Periphery curriculum.

Periphery – a film and photography exhibit exploring the ethnic diversity of Toronto’s Jewish community (jewishindependent.ca/discussing-jewishness) – came out last fall. The new curriculum builds on that 27-minute documentary. It comprises another nine short videos, all under eight minutes each, and lesson guides for students in grades 8 through 12 in both the Jewish and public school systems. There is also a guide for Jewish groups and organizations, which could be used for non-Jewish groups.

Launched by the Toronto-based nonprofit No Silence on Race and the Ontario Jewish Archives (a department of UJA Federation of Greater Toronto) with the organization Facing History and Ourselves (an American group with a Toronto branch), the curriculum is Ontario-focused. That said, most of the information is broadly based and relevant to Canadians no matter where they live, and no matter their age.

There are differences in the curricula for each of the three grade groupings (Grade 8, grades 9 and 10, and grades 11 and 12), the Jewish versus public school content, and the community dialogue package. However, the basic format and information is similar, with appropriate adaptations for probable starting points in knowledge and experience.

The common learning aims include “a greater awareness and understanding about who Jewish people are and the ethnic diversity within Jewish communities”; “Possess a stronger framework for understanding the complexities of intersectional identity, using their own identities as a foundation”; “Understand the difference between individual and group identity with a focus on belonging and recognition”; and the role of students and community members in creating inclusive community spaces. In addition, for example, the Jewish community curriculum also suggests that participants: “Discuss the intersections of race, privilege, mobility (i.e Jewish professional opportunities), power as it relates to Jewish identity and ashkenormativity.”

Before delving into the films and lesson suggestions, the curriculum offers a few activities that help frame what viewers are about to watch and discuss – beginning with making “space for a productive and respectful conversation.”

The most extensive part of the guides is the screening prompts and activities. They are organized by topics based on those of the videos, such as “Hyphenated Identities,” “Immigrating to Canada” and “Finding Strength in One’s Heritage.” They include pre-screening and post-screening questions for each film and topic, and these questions elicit self-evaluation and the sharing of stories and views on identity, race, multiculturalism, sexuality, antisemitism and social justice, as well as discussion of the experiences and opinions of the interviewees featured in the films.

The final part of the guide attempts to have participants take what they have learned out into the world, beyond the classroom or boardroom or office. For example, the title of the last section of the Jewish community dialogue is “Now What?: Social Justice within the Jewish Community and Beyond.” It begins with discussion from a global perspective – using a quote from Canadian anthropologist Wade Davis to talk about questions like, “What does it mean for us to hear from different voices of humanity?” It then highlights a quote from the Mishna and one from Pirkei Avot to further reflect on the idea that repairing the world, tikkun olam, begins within the community.

In addition to the curricula, there are related materials available to download, from worksheets to help understand the concepts being discussed and organize one’s thoughts, to an introduction to Judaism, to a glossary of terms. The poem “Unpacking the Periphery,” by Akilah Allen-Silverstein, can also be downloaded. It concludes “For each other as allies, I pray we can stand tall / Diminish the fine lines, deepen our understanding, / Listen with compassion / Listen with empathy / Act with courage / Act with reason / Because this is the season / To do better / To act on the Open Letters / To be more than trend setters / But intentional change makers.”

All of the Periphery curricula and resources are free and downloadable at peripheryexhibit.org. 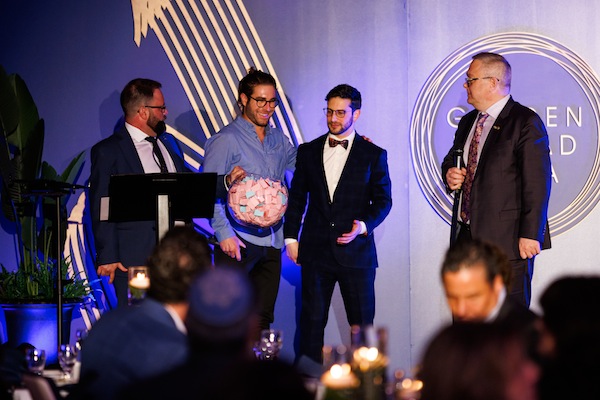 “The reality is King David took a student who genuinely struggled, exposed me to meaningful ways to make a difference – they gave me passion and purpose, they provided me with academic rigour to realize my dreams, provided me with confidence, and then added a fundamental layer of Jewish and humanist values,” said Aaron Friedland, addressing a full house at King David High School’s Golden Thread Gala on May 12.

“And what is interesting is how unremarkable my story at King David is,” he continued. “There are simply too many grads who King David has helped to overcome the odds and flourish – and it’s the outcome of brilliant and caring educators investing in us.”

Friedland is founder and executive director of the Simbi Foundation, which helps underserved and refugee communities access education. He is a National Geographic Explorer and a PhD candidate in the field of econometrics, focusing on the interplay of economics and education. And these are only a few of the many accomplishments and projects on Friedland’s growing resumé.

He came to King David in Grade 8, he said, after having attended four different elementary schools. “I’m incredibly dyslexic,” he shared, “and there was a time when teachers told my parents I likely wouldn’t make it to university.”

But there is more to King David than preparing students for university, he added. “The world doesn’t just need more university grads. The world needs more global citizens who are passionate about creating positive impact and who have the skill set to realize their dreams.  Tonight is about celebrating a school that has developed a tried-and-true approach to developing global citizens who thrive while engaging in tikkun olam, or repairing the world. And I’m not sure if you’ve seen or have been reading the news, but the world could use a little repair.”

Mentioning COVID-19, Russia’s war on Ukraine, the challenge to Roe v Wade in the United States and generally declining literacy rates, he spoke about the need for hope. He then cited primatologist and anthropologist Jane Goodall, whom he had interviewed on Simbi Foundation’s Impact in the 21st Centurypodcast.

“Jane explained, ‘Hope isn’t just wishful thinking – it’s rolling up our sleeves and doing something about the problem.’ And she shared a few pieces of wisdom,” said Friedland.

“When we’re feeling a lack of hope, it’s important to remember just how much power we each possess.

“When we’re feeling stuck, we must think globally and act locally. She means that we must find causes we’re passionate about and start making a difference immediately,” he said. “No action is too small. Jane spoke about the addictive nature of helping. And, once we’re helping, we’re part of the solution and it feels great – so we do more of it.

“And, when I pushed Jane further, she explained that she stays hopeful for three reasons. One, our amazing human intellect. Two, the indomitable human spirit – meaning, we don’t give up. And three, the power of young people.

“Jane believes in the power of young people so strongly,” said Friedland, “that it is where she invests all of her time, specifically high schoolers, because she believes that those are the people who are going to change our planet and change the world. And, after speaking with Jane, it got me thinking about how King David is the exact breeding ground for the types of people who come out and positively impact the world and give us hope.”

A visit to KDHS by farmer J.J. Keki, a leader of Uganda’s Abayudaya Jewish community, was the spark for Friedland’s tikkun olam work and further study. The Simbi Foundation began its life as the Walking School Bus and the organization now builds solar-powered classrooms, known as BrightBoxes, in Ugandan and Indian refugee settlements, with each installation providing up to 6,000 students with access to education and electricity. The foundation’s chief operating officer and co-founder is Ran Sommer, another KDHS graduate.

The Golden Thread Gala celebrated the almost 750 students who have graduated from KDHS since it was established – and it raised $202,491 for the school.

The gala, which was held at Congregation Beth Israel, began with a piano and vocal performance by student Joseph Gabay, and also featured a song performed by students Kailey Bressler, Rachel Gerber, Mhairi Hemingson and Kiera Katz; group member Sara Bauman was unable to attend. Alex Monchamp, deputy head of school, stepped in to welcome the crowd because head of school Russ Klein couldn’t be there either, but Klein’s emcee duties were taken on by actor David Kaye, another KDHS alum. As part of his emceeing, Kaye interviewed on stage two other KDHS grads – Jordan Grubner and Ava Katz – about their time at the school and how it prepared them for the larger world.

Rabbi Stephen Berger, head of Judaic studies, did the blessing over the bread before the meal and gave a few remarks, as did gala committee co-chairs Heidi Seidman and Sherri Wise, and KDHS board members Alain Guez and Chana Charach. Howard Blank led the live auction.