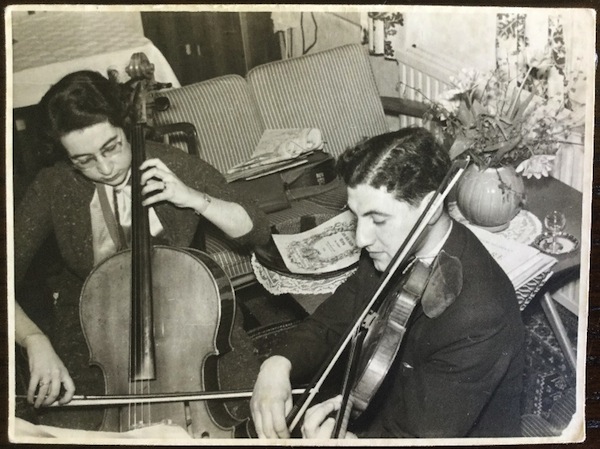 The Victoria Shoah Project has launched a virtual exhibit of an autograph book compiled by Mænni Ruben, a Danish violinist and graphic artist held prisoner at Terezin (Theresienstadt) concentration camp outside of Prague.

The 1945 Theresienstadt Autograph Book Exhibit features panels and the 40-page book itself, which is replete with signatures, sketches and aphorisms from Ruben’s friends and acquaintances who were also incarcerated at Terezin.

The book records the closing period of the war as survivors were being liberated. It is a story not only of the horrors of Nazism, but of long-lasting friends, and the music and art that united them during dreadful times.

Ruben died in 1976 in Copenhagen. Though he never lived in or visited Canada, the book remained with his widow, Susi, who remarried after his death and settled in Victoria. Upon her passing, in 2018, the book came into the hands of Rabbi Harry Brechner of Victoria’s Congregation Emanu-El. He subsequently showed it to member Janna Ginsberg Bleviss, who became the coordinator of the exhibit project.

“When the rabbi showed the book to me last year, I could see right away that it was special and should go to a museum. It is in remarkable condition for being 75 years old and is a tremendous addition to Holocaust studies,” Ginsberg Bleviss said.

“I was fascinated by the book – who were these people and what happened to them? Reading the pages filled with optimistic greetings, illustrations and pieces of music was like finding a hidden treasure, waiting to be opened. I wanted to discover who these people were and hear their stories,” she added.

“This virtual launch [which took place Aug. 20] is meant to honour both Mænni and Susi, and the memory of those whose lives intersected in space and time in the Theresienstadt camp. None of the artists, musicians, composers or rabbis who wrote in the book are alive, but we can sense their lives through their traces here,” said Dr. Richard Kool, a member of the Victoria Shoah Project.

A number of panels show the powerful drawings of artist Hilda Zadikow, whose husband, sculptor Arnold Zadikow, died at Theresienstadt. One depicts the coat of arms of Terezin under a Magen David made of barbed wire. Another features three sad, grey sketches of the camp itself. In a third, there is a happier scene of colourful opera figures.

Her inscription in the autograph book reads, “Your old friend Hilda Zadikow wishes you all the best and delight in beauty.”

A poignant message comes from Rabbi Leo Baeck, an intellectual and leader of the German Jewish community and the international Reform movement, who wrote: “What you forget and what you don’t forget, that is what decides the course of your life will take.”

Pianist Alice Sommer Herz, the subject of the 2007 book A Garden of Eden in Hell and the 2013 Oscar-winning documentary The Lady in Number 6, was another prisoner at the camp. Sommer Herz, who died at age 110 in 2014, wrote in Ruben’s book: “In memory of music at Theresienstadt and in strong hopes of a better future.”

And a touching note comes from Miriam Pardies, someone Ruben seems to have known only in passing: “We know each other only from having greeted each other in a friendly way, but that too is a good memory,” she writes in the book.

“There is a huge educational value to these pieces for students learning about the Holocaust, or for researchers who want to continue exploring the stories of these most interesting people during an important time at the end of the Second World War,” remarked Brechner.

Ruben and his family were sent to Theresienstadt in 1943. A place where the Nazis kept prominent Jews, the camp housed musicians, intellectuals, artists, religious leaders and hundreds of children. In 1944, the inmates performed a concert for German visitors and the visiting International Red Cross – the performers were forced to act as though life at the camp was normal.

Losing his father at the camp, Ruben returned home after the war. A few years later, he met his wife. They married and both played in the Copenhagen Youth Orchestra – she on cello and he on violin. Mænni Ruben also worked as a graphic designer and Susi Ruben as a fashion designer; they were together for 24 years.

After her husband died, Susi Ruben’s company sent her to Israel, where she met Dr. Avi Deston. They married in 1978 and went to South Africa for 13 years, where Deston taught physics at the University of Transkei. On his retirement, they came to Victoria, in 1992.

The autograph book will be donated to the Canadian Museum for Human Rights in Winnipeg for their Holocaust gallery. To view the virtual exhibit, go to terezinautographbook1945.ca.