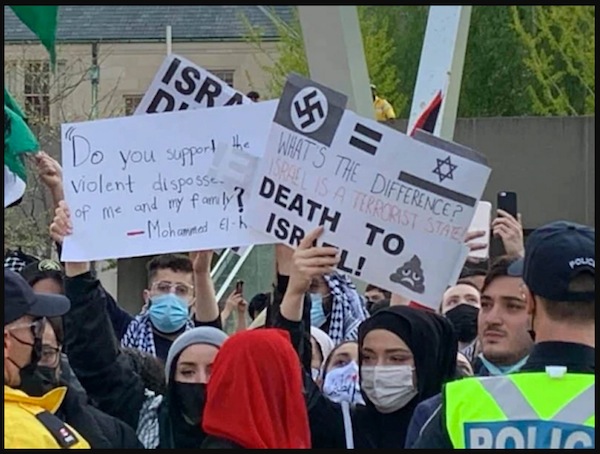 Signs shown at a recent rally in support of Palestine. (screenshot from cija.ca)

The Centre for Israel and Jewish Affairs is calling on the federal government to expand supports for Jewish communal security after a surge of antisemitic violence and vandalism in Canada, and to launch an emergency summit on antisemitism.

Shimon Koffler Fogel, CIJA’s chief executive officer, made the request in a meeting with senior staff from the prime minister’s office and Liberal cabinet ministers and members of Parliament May 20. Later that day, he spoke at a virtual event billed as a national Canadian Jewish community briefing, called Learn, Mobilize, Act: Keep the Conflict Out of Canada.

“We are calling on the prime minister to convene an emergency summit on antisemitism that will include the political leadership at both the provincial and municipal levels, a true all-of-government effort, and establish a comprehensive program to combat Jew-hatred, the oldest and most enduring hate the world has ever experienced,” he said.

CIJA also wants a complementary program to the Security Infrastructure Program, “that enhances the capacity of our community to take ownership of our own security.”

He spoke just hours after Israel announced a ceasefire in its most recent battle with Hamas.

“As we express hope for a durable ceasefire to take hold and an end to the conflict there, we are painfully aware that the battle has moved to our country, to our communities from coast to coast,” Fogel said. “It’s been frightening but we dare not cower and hide. It’s been disturbing, but we dare not be intimidated from asserting our identity, who we are and what we are, and in doing so with pride…. Our adversaries seek not only to erase our ties to the land and history of Israel, they seek to erase the presence of Jews altogether.”

He lauded the additional attention to racial justice that has emerged in recent years. “But, along with the good of that movement has come a contaminated strain that reduces everything to a simple equation of the oppressed and the oppressor, and Jews have been declared the poster child of the oppressors, so they must be rejected and vilified,” said Fogel.

“Over the past two weeks, we have watched with shock as our fellow Jews in Israel have been subjected to attack at the hands of Hamas, a terrorist organization bent on the destruction and the obliteration of the Jewish state of Israel and the murder of Israelis,” said Reitman. “Our sorrow and compassion is extended also to Hamas victims in Gaza, where Hamas has embedded its terrorist infrastructure within densely populated areas, deliberately putting the people of Gaza in harm’s way and where one-third of Hamas missiles have fallen, taking many innocent lives.

“Our outrage has deepened as the violence on our television screens has spilled over into violence and threats of violence directed against the Jews in our streets, in our communities, online and in our places of business, our schools and our houses of worship,” continued Reitman. “Never has it been more clear that Jewish people, whether we live in Canada or in Israel, must stand as one. Never has it been more clear that the ancient hatred of antisemitism does not distinguish between a Jew in Tel Aviv at or a Jew in Toronto. We are all targets…. We will not be intimidated. We will not be discouraged. We will call out the perpetrators of violence and we will call on our many friends to stand with us and we will act together. Together with our fellow Canadians right across this country, we say, enough. We know where antisemitism leads if left unchecked. We know what must be done to stop it. And, together, stop it we will.”

Naomi Rosenfeld, executive director of the Atlantic Jewish Council, said it has been a scary few weeks to be a Jew.

“With all this hatred and fear,” she said, “I hope that we all remember three things. One, it has never been more apparent why we need Israel and why we need a strong Jewish state. Two, if any of you have been going through any of the things that I’ve mentioned, please know that you are not alone. We stand together, a community here to support one another through each of these events. And, finally, as a national Canadian Jewish community, we must remain strong and resilient. We will not cower to fear and we will not hide our true identities and who we are.”

Dr. Gil Troy, professor of history at McGill University and an author of several books on Zionism, spoke of being a parent of two members of the Israel Defence Forces and the betrayal he felt to read a letter signed by 180 rabbinical students comparing the racial reckoning in the United States in recent years directly to the Israeli-Palestinian conflict.

“We’re told again and again, especially by my friends in the United States, too many of my Jewish friends in the United States, that this is a racial issue between the white Israelis, the white privileged Israelis, and the brown Palestinians,” said Troy. “And we are told that the cause of this latest conflict is Israeli provocations.… We all know that the underlying cause of this is the refusal of Hamas, the refusal of Islamic Jihad, the refusal of the so-called moderate Palestinian Authority to accept the fact, 73 years after the establishment of the state of Israel, that the state of Israel exists.”

Jeff Rosenthal, the other co-chair of CIJA, asserted that “Jews and only Jews have the right to define what constitutes antisemitism.” He said, “We’ve always known that there is no distinction between anti-Zionism and antisemitism. Our lived experiences and the experiences of our forefathers and ancestors confer a unique alertness to this threat.”

He called on viewers to mobilize and directed people to the Action Centre on the website cija.ca.

The birth of a baby is a milestone and the Jewish Community Centre of Greater Vancouver acknowledges that this life-changing event requires validation and support for new parents. Judaism offers profound teachings about becoming a parent and raising a family.

The JCCGV’s new Shalom Baby group is a free program for parents and infants 0-18 months. The group provides a place to learn and grow, connect with other parents, share experiences and hear professional speakers address relevant subjects, such as feeding, sleeping, play, development, transition to motherhood and more. Becoming a parent can be overwhelming, and this program provides respite in a warm environment in which parents are nurtured, so they can nurture their babies, and help build strong and healthy family units in our community.

All of the meetings feature guest speakers. Speakers are community professionals, such as nurses, researchers, doulas, psychologists and speech and language specialists. And the group is always looking for accredited experts to contribute.

Shalom Baby meets twice a month on Mondays at 11:30 a.m. at the community centre in Room 102. The group is led and organized by a Shirly Berelowitz, JCCGV director of children, youth and camps, who welcomes the participants, books the speakers and sends weekly emails on upcoming programs.

The goals of the program are to strengthen emotional bonds between parents and children; inspire a shared learning experience to support growth and development during the early childhood years; provide support services and activities for families to raise healthy and happy children; and connect unaffiliated Jewish families with young children to the Jewish community through different programs.

For more information and to register, visit jccgv.com/early-childhood.

The Centre for Israel and Jewish Affairs (CIJA) has appointed new members to its board of directors, including board co-chairs Joel Reitman and Jeffrey Rosenthal, succeeding David J. Cape.

Nominations to the CIJA board are guided by an independent nominating process, which examines the background, skills, experience and other relevant qualifications of prospective directors. A list of candidates is produced through consultations with federations and other stakeholders across the country. The independent nominations committee – comprised of federation representatives and ad personam members – consider all of the candidates and recommend a slate of directors to the CIJA membership (the “shareholders” of the organization). Special attention is given to achieving balance with respect to regional, gender and demographic attributes, as well as the qualities that candidates can leverage to advance the mission of the organization.

Reitman is the founder and president of Jillcy Capital ULC, a global investment firm, and is an active volunteer in the Jewish community and beyond, serving various organizations over the years in different capacities. Rosenthal is a managing partner of Imperial Capital Group, which he co-founded in 1989, and has a long history of volunteering and experience on boards of other organizations.