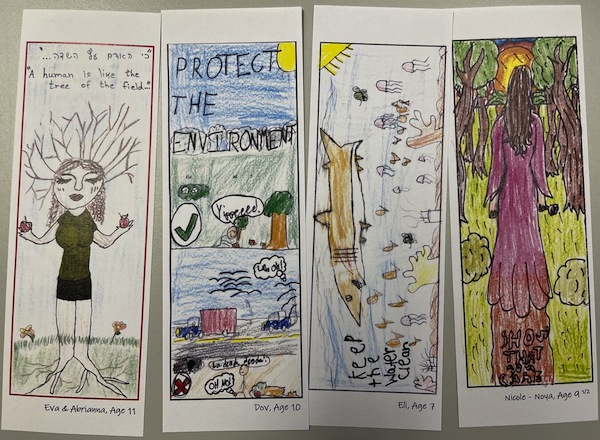 Isaac Waldman Jewish Public Library wishes mazal tov to the winners of its bookmark contest and to all the contest participants. “We really appreciate the efforts of all the participants and the wonderful creativity they have displayed in designing their bookmarks. It was a pleasure to review them all,” said the library in an email. “This year, we have chosen four designs that best reflect the theme of sh’mirat ha’teva, protecting the environment.”

Kleiner Services Inc., owned by Mary and Konstantin Kleiner, was among the top five finalists for the Best Immigrant Entrepreneur Award this year. This award recognizes outstanding new Canadians who, after immigrating, have created successful small businesses while demonstrating leadership and breaking down barriers.

Kleiner Services Inc. is a professional moving company that offers pre- and post-moving services, such as packing, storage and assembly. They are based in the heart of the Lower Mainland, servicing Greater Vancouver, Fraser Valley and Vancouver Island.

The competition is judged by experts from different aspects of the book industry, including publishers, writers, editors, book cover designers and professional copywriters. Selected award winners and distinguished favourites are based on overall excellence. This year, the award had entries worldwide – from Australia, Canada, India, Ireland, Japan, Singapore, Switzerland and the United Kingdom, among other countries.

“The quality and quantity of excellent independently published books hit a record…. We are so proud to announce these key titles representing global independent publishing,” said awards sponsor Gabrielle Olczak.

To see this year’s list of winners, visit independentpressaward.com/2021winners. (The JI’s review can be found at jewishindependent.ca/life-changing-impact.)

The e-book market has been growing by leaps and bounds, particularly in Canadian libraries, where the concept of a book that doesn’t get dog-eared, doesn’t fall apart and can be carried around on something as small as a phone or tablet seems to appeal to young and old alike. According to a 2014 report published by the Canadian Urban Libraries Council, the interest in e-books in libraries “has exploded” since 2011, when e-book borrowing constituted just one percent of the overall circulation in Canadian libraries. By 2013, that number had jumped to 10 percent, demonstrating that library readers were now comfortable with the digital book format.

The Isaac Waldman Jewish Public Library has been tapping into that surge, thanks to a grant from the Sonner Family Foundation. The library launched its digital book-lending program in 2013, said librarian Helen Pinsky. The program got going at the encouragement of Eve Sonner, who manages the family foundation in her parents’ memory. The list of available books now numbers around 206 titles. “[It] is just amazing how much we were able to do and how much we were able to achieve [with this grant],” she said.

But keeping up with the expansion has been a challenge at times, she added, particularly because of the cost that publishers charge libraries for digital books.

“The popular books are extremely expensive in e-book version,” Pinsky explained. This is because most publishers charge libraries a higher price for e-books, which are regulated under usage licences based on the amount of times the book is checked out and the length of the licence. The top five Canadian publishers – HarperCollins, Hachette, Macmillan, Penguin and Random House – will all licence to libraries, but with varying terms. Simon & Schuster’s pilot library program was not available until 2014, when it made its digital property available on the electronic public library system.

Isaac Waldman licences its e-books through OverDrive, an e-book platform that sets its own contracts and costs. Pinsky said the average cost of an e-book licence for a newly released book can run as much as $85. That allows for it to be listed for two years or 26 views (whichever limit is reached first).

“So it is very difficult for us to maintain this,” she said, explaining that the library naturally wants to carry the most popular and requested titles, but must find a way to balance the costs. “It is our intention to, but we would really love to get more financial support to keep this collection growing.”

“We serve so many [interests], and are constantly trying to keep each area current and meaningful to its reader base,” explained Pinsky. The money raised is allocated according to need. “For example, we’re always updating the storytime corner, where parents and grandparents come with their little ones to hear stories being read, or to read together. Our non-fiction books include the latest in politics, economics and history/biography, especially about Israel. We try to entice and encourage young readers with the latest in their favorite genres, all with a Jewish motif.” Some of those selections may be in print, while others are in electronic format. Pinsky said the library generally tries not to duplicate print editions in its electronic listing, but makes exceptions in some cases.

“Many of the purchases these days are in direct response to requests. And so, what we want to do is make books available to our members that wouldn’t necessarily be available through [other] library systems.” So books that have long wait times at other libraries, or are hard to get, are also considered for the program.

Some of the most popular e-books that the library has carried include My Promised Land by Israeli journalist Ari Shavit, The Remains of Love by Zeruyah Shalev and Growing Up Jewish in China by Dolly Bell. Pinsky said there are also books that are difficult to supply on the OverDrive system, and those include books in Hebrew and children’s picture books.

Asked if she had any advice for readers, she said simply, “Avoid long lines by borrowing from us.”

Those who wish to contribute to the library can either do so at the time of the telethon, by going online to the Isaac Waldman site at jccgv.com or by calling 604-257-5181. Those who donate $36 or more automatically become Friends of the Library.

“We are grateful to the Sonner family for their generosity in initiating the e-book program and helping us to build the collection,” said Pinsky. “Eve chose this initiative to honor the memory of her father, who was an innovative and creative thinker.”

Jan Lee’s articles have been published in numerous publications. She also writes on sustainable business practices for TriplePundit.com. Her blog can be found at multiculturaljew.polestarpassages.com.

For many of us, the Isaac Waldman Jewish Public Library is the go-to place when looking for that irresistible book to read. It’s also where we search for that compelling DVD on Jewish culture that other libraries are unlikely to carry. It’s the place where unique book launches are held, where we might send our kids (or ourselves) for Hebrew lessons and where there are discussions on Israeli politics, Jewish culture or Yiddish literature just about any day.

This month, the library revisits another tradition, with its annual book sale Nov. 23-27, 10 a.m. to 9 p.m., at the Jewish Community Centre of Greater Vancouver (concurrently with the Cherie Smith JCCGV Jewish Book Festival). The five-day event has been going on for almost 20 years and has become iconic for the library and its many patrons, said Waldman librarian Helen Pinsky.

“We sell literally thousands of books during that time,” she said. This year’s event will be no different. The library, with the help of volunteers, has been busily unpacking and cataloguing books that have been donated to them by patrons around the city.

“Some books come from the library because we have to keep everything circulating,” Pinsky explained. Older books that may no longer be read as frequently become great candidates for the sale, along with those that are donated by families and organizations. “We have assisted many, many people in downsizing.”

She added, “People wait for this event from year to year and tell us that this is one of the highlights of their book-buying.” Customers include not just members of the Jewish community, but many people from other Lower Mainland communities who rely on the sale for Judaic literature. “We also have a very huge following among the Christian community – people who know about it, and come in … to collect books that are valuable to them.”

And the money that’s raised is important, said Pinsky, who explained that many of the library’s financial engines are run on what is gained from the sale. Book purchases, operational costs and special presentations at the library all succeed, in part, because of the generosity of donors and the support of volunteers. “We have always relied on it as a very stable source of raising funds,” she said.

One of the benefactors of the sale is the library’s speakers series, which routinely hosts presenters from a wide variety of backgrounds. Pinsky said the library considers hosting presentations on the Holocaust and the experiences of concentration camp survivors to be one of its more important missions.

“We have been very conscious of [the need] lately, because the last of the survivors are coming to the ends of their lives,” she said. The library has previously featured presentations by local survivors and others who have wanted to share their stories. The book launches have often featured stories of individuals who have dedicated their lives to teaching younger generations. She said the library strives to offer “the kind of information that will help the community to constantly remember” the effects that the Shoah left in its wake.

Most of the library staff is volunteers. Pinsky said their service is essential not only to a smooth-running facility, but to the success of the book sale. Hannah Frankel, who unpacks and catalogues the donations, has been volunteering her time for four or five years. She said the popularity of the sale can be seen in the volume and quality of the donations. Just weeks before the event, donations were still arriving “in the hundreds.”

Frankel speculated that most of the donations are the result of “word of mouth” advertising. “People seem to know we exist,” she said simply.

For Frankel, ensuring that Vancouver has a strong and vibrant library is a large part of why she volunteers her time for the sale. “I just think it is important for the Jewish community to have a Jewish library,” she said.

Jan Lee’s articles have been published in B’nai B’rith Magazine, thedailyrabbi.com and Voices of Conservative and Masorti Judaism. She also writes on sustainable business practices for TriplePundit.com. Her blog can be found at multiculturaljew.polestarpassages.com.