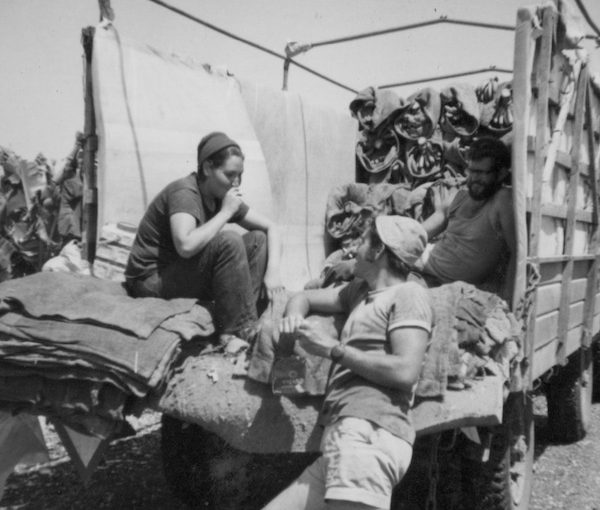 Stacking the banana bunches in the wagon required a type of superpower. (photo from Victor Neuman)

My first inkling of how fighting is done in this region of the world came in 1969, when I was working on the pipeline near Arad. Our crew was encamped at a motel and so were some Israeli soldiers. At that time, there were infiltrators crossing from Jordan into Israel and planting bombs wherever vehicles were likely to pass. Tourists like myself were warned to hitch rides while standing on the paved part of the road – never the soft shoulder. Similarly, the cars picking you up never pulled over; they simply stopped in the travel lane and waited.

The Israeli patrols were setting up ambushes in wadis in the area. When they came back to the motel to warm up, I talked with them about what they were doing.

As darkness came, the soldiers drove out to a wadi that showed signs of human activity, positioned themselves and waited. It was damn cold, they told me, especially when you had to remain still for a long time. Their jackets and leggings kept most of their bodies warm but their hands became very cold. You can’t properly operate a weapon with gloves on.

“So, what did you do to keep your hands warm?” My question got laughter in response.

“Shall we tell him?”

“Well, if you must know, we all sit around with our hands in our crotch. That’s the only way to keep them warm.”

Still the greenhorn, I asked them if they had any luck or taken any prisoners. Again, they looked at each other – in more seriousness this time.

“It’s dark and you can’t see what they have in their hands even when their hands are in the air. We just kill them all.”

I had no more questions.

Now, it was 1973 and the war had been going on for two weeks. The tide had turned. Syria had been pushed back from the Golan and Egypt had been cut off in the Sinai. To the relief of all of us on the kibbutz, Jordan’s only contribution to the war had been to send some soldiers to fight alongside the Syrians. There was no Jordanian third front in the war.

A trickle of kibbutz members – mainly the older reservists – began returning from the front lines. One of them was a good friend and a fellow banana worker named Moti.

Moti’s talent in the fields showed itself during our time of kateef (cutting, or harvesting). Moti received the bunches and quickly stacked them in the wagon, usually about eight rows high. His superpower was being able to do this in a way that the row would not collapse before the next row shored it up. I tried it once and produced a banana avalanche. It was one of those things that is funny in hindsight – at the time, we had to empty the whole wagon and start over. Time was wasted, bananas were bruised, Lev was pissed.

Moti told me he hadn’t been on the front but had heard stories from those who were. They told him that they had retaken outposts that were overrun in the first days of the war. They found Israeli soldiers tied to the four corners of their bunk with their bellies cut open. I asked him if he had seen any of this; he told me he hadn’t. They were just stories he had heard, but he believed them.

Having Moti back was like old times. Moti, Lev and I were all back in the bananas, along with a number of tourist-volunteers. We were able to properly tend the fields again and we wished to think that life was returning to normal.

Still, the war came home whenever someone else came back on furlough and brought their stories. Next to return were Tzvie and Ari – good friends who, in peacetime, worked the fields together and, in wartime, shared a tank. Just before the war, they had completed their three years of military service and were off on a tour of Europe. No one on the kibbutz could afford to do such things, so the kibbutz rewarded everyone who completed their army stint with an all-expenses paid trip to Europe. It was a once-in-a-lifetime chance to see the world before settling down and all the kibbutz kids dreamed of their time abroad.

Tzvie and Ari were two weeks into their trip when the news reached them that Israel was under attack. Ari wanted to carry on with the tour, arguing that the war would be over before they got home, but Tzvie would have none of it. He told Ari that he would go insane if he were walking around Europe while his country was at war and he became so agitated that Ari agreed to return.

One of the war stories they shared was that, on one of their forays, their tank was hit by a wire-guided missile – a portable device enabled the operator to fire the missile and control it in flight by means of a wire that played out as the missile flew on its path. The Egyptian army had many of these missiles and they took a deadly toll on Israeli tanks in the opening days of the war.

When Tzvie and Ari’s tank was hit, it was immediately disabled and the entire crew had to abandon it quickly. With the enemy nearby, they couldn’t exit from the top of the tank so they dropped the hatch at the bottom and escaped using their tank’s track-and-wheel assembly as cover. They were tripping and stumbling over anti-tank wires from an earlier battle but managed to haul their guns and a box of ammunition to a nearby hill. They were grateful to be alive but less so when they realized they had brought the wrong ammunition; it was compatible with one of the tank’s machine guns but none of the weapons they were carrying. In despair, they hunkered down and waited to be attacked. Then they began to notice how quiet it was. In fact, there was no one around but them. They came down from the hill to investigate and found that their tank had actually hit a land mine.

Ari said of the experience, “Yes, it was scary, but at least our job is driving a tank. It’s worse to be a paratrooper. There they tell you that, if your chute doesn’t open, point yourself head down toward the ground. That way they can reuse your boots.”

At this point, Ari and Tzvie smacked each other on the back and laughed their heads off. Seeing our cue, we all laughed as well.

Now I had the whole range of it. War, murderous and savage. War as slapstick.

(Next Time: The Ceasefire)

(Previously: “Learning the lay of the land”; “When Afula road went quiet”; “Tending the banana fields in war”; “Weapon training begins”; “Near tragedy on guard”)

Victor Neuman was born in the former Soviet Union, where his family sought refuge after fleeing Poland during the Second World War. The family immigrated to Canada in 1948 and Neuman grew up in the Greater Vancouver area. He attended the University of British Columbia and obtained a BA and MA with majors in English literature and creative writing. Between 1968 and 1974, he made two trips to Israel, one of which landed him on a kibbutz at the time of the 1973 Yom Kippur war. Upon his return to Canada, he studied Survey Technology at BCIT and went on to a career of designing highways for the Province of British Columbia and the firm of Binnie Civil Engineering Consultants. When he retired, he reconnected with his roots in creative writing and began writing scripts for Vancouver Jewish Folk Choir concerts and articles for the Jewish Independent. Neuman and his wife, Tammy, live in southeast Vancouver and enjoy the company of friends, their extensive extended family and their four sons.