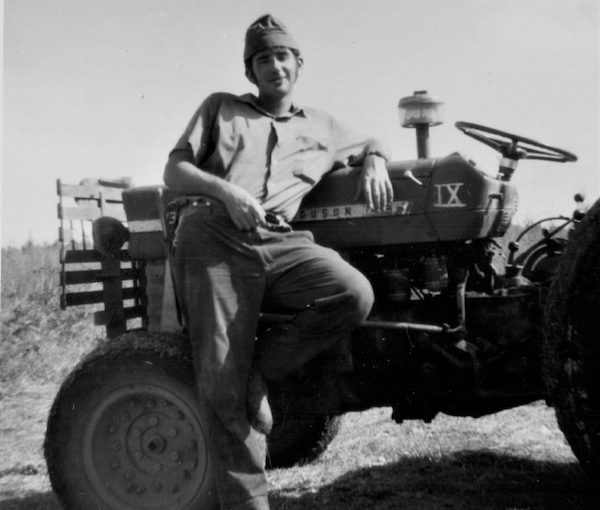 The author was in the banana fields, working on the irrigation system, when the war started. (photo from Victor Neuman)

Sometimes, war begins with a whimper and not a bang. It was Oct. 6, 1973. I was back on the kibbutz that I had been on with Suzanne, except Suzanne had never returned from Paris.

I was in the banana fields, working alone on the irrigation system, when I began to feel a strangeness in the air. At first, I couldn’t put my finger on what was different. I was alone – just me and my tractor – but that was nothing new. The bananas were not ready for harvesting, so no one else was supposed to be around. The pruning of new shoots was over with and the stripping of dead leaves had been done a couple of weeks before.

Not being able to determine what was bothering me in that moment, I went back to pondering the meaning of my life. I had been to Israel on a previous trip, spent a year or so on three different kibbutzim, done archeology in the Negev at a site called Tel Beersheva, worked on construction of a chemical pipeline near Arad, gone back to Canada to get my master’s in English literature, and now I was back in Israel, at the age of 28. I still had no clue as to what I wanted to do. Go back to Canada? Teach English at the University of British Columbia? Stay in Israel? Become a member of the kibbutz?

Skewing my thought process was my relationship with a kibbutz Sabra named Tamar. By all I hold dear, Tamar was the most beautiful creature I had ever laid eyes on. When I met her, I was gob-smacked and smitten. When I found out she kept an Uzi in her flat, I was gob-smacked, smitten – and careful. She had become an officer during her two years of military service. On her bookcase, there was a photo of her looking rather sternly at her platoon. They were standing stiffly at attention while she inspected their weapons. Definitely not a gal to be trifled with.

Complicating things more was the fact that Tamar was 26 and the first child born on the kibbutz after it was founded in 1949. She was the darling of the kibbutz and, at the same time, a big concern to everybody. After all, she was already 26 and, by the standards of the day, she was on the cusp of becoming an elderly single. She had a problem common to many kibbutz youths. Who was there to get it on with? Our kibbutz, like many others, had what’s called a beit yeladim (children’s house). All babies that are weaned are taken and put in the children’s house; there, they are raised until they are of high school age. They visit with their parents frequently but, at the end of the day, they return to their communal home to sleep and live. The result is that they grow up feeling that their peers are like their brothers and sisters. Romantic feelings are hard to come by and their best chance of finding a partner is to match up with somebody from outside the kibbutz.

The kibbutzniks liked me. I worked hard. I had a university education. I always volunteered when extra work needed doing and I had applied for membership. Everybody was pulling for me and Tamar. I told my kibbutz friend Aaron that my dating Tamar was still a thing in its early stages. He was having none of it. To make his point more emphatic, he switched to English and called me by my kibbutz nickname, Kanadi. “No, no, no, Kanadi. You marry 26!” It was a romance in a goldfish bowl but I didn’t mind. She was gold to me.

When my mind returned to what was happening in the banana fields, it hit me. The constant hum of traffic on the Afula road was missing. This road was a major corridor just below our fields and it was constantly abuzz with trucks, tractors and cars. Israelis called it the “Ruler Road.” As they put it, “It is straight as any school ruler and it even has a hole in the end – Afula.” (There was never much respect for the town of Afula.) But now the road was silent. I drove the tractor to the top of a hill to get a better look and was surprised to see the road deserted. Something was going on.

Suddenly, there was a horrific racket from above. A helicopter gunship roared overhead, heading straight up the Afula road at just above treetop level. It was so close I could see the barrels of guns bristling from every port on its side. In another second, it was gone. Then, a second gunship barreled through. Same height and same direction. I started to worry.

I hopped on my tractor and booted it back to the kibbutz. Same story all along the way. No traffic on the roads. Nobody working any of the fields. Nobody walking around. Just me. As I drove into the parking lot, the roads and walkways were deserted. It was as if a mysterious virus had devastated the earth and I was the only one left. I was starting to feel like I was living in an episode of The Twilight Zone.

Then, I heard voices coming from the dining hall, so I walked in that direction. When I entered, everyone was there. The voices had dropped off and now there was only one voice dominating. It was Gidon, our designated commander.

Gidon was a recent immigrant and a South African Jew. It never surprised me that he would be in charge of our defence. Every South African immigrant I met in Israel was trained in the military. Not by Israel but by South Africa. The British won the Boer War but the Afrikaners were running the show and they were determined to never let the blacks get the upper hand. It seemed that most South Africans knew one end of a gun from the other, even the many who were disgusted with the brutality of apartheid and had left the country. So, while most Jews immigrating to Israel were novices when it came to the art of war and had to be extensively trained, the South African Jews I met had come prepared.

Gidon’s voice wasn’t the loudest I’d ever heard but, in the hush of that room, it was loud enough. Thankfully, his Hebrew was as far along as mine and I understood everything he said: “… and there will be no more swimming in the pool. The swimming pool is now our emergency drinking water supply. All tractors and vehicles are to be filled up with fuel and oil. All tractors and vehicles are to be scattered around the kibbutz and not parked in one place. The bomb shelters are no longer discothèques. The kids have to clear out all the records, strobe lights and disco stuff.

“Before the day is over, I want white lines painted on all the shelter pathways. We are blacking out the kibbutz and we have to be able to find our way to the shelters in the dark. No lights on after dark in the rooms unless there is black plastic taped to the windows. Patrols by the shomer leila [night guard] around the kibbutz perimeter are to be carried out seriously. I don’t want to hear of any guards hanging out in the kitchen having food and coffee. They can pack their lunches and eat them as they do their rounds. No, we can’t double the patrols. They’ll just end up shooting one another. That is all. We are at war. Are we understanding? Then go do your jobs.”

I looked across the room at Tamar. She looked back and her expression was serious. We were at war.

(Previously: “Learning the lay of the land”)