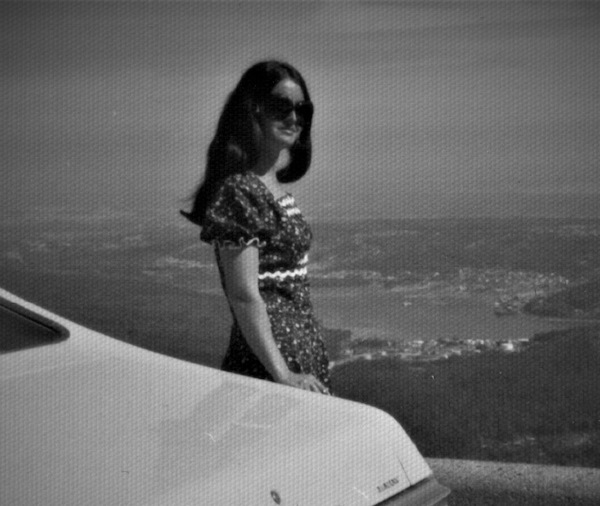 Tamar on a visit to Canada. (photo from Victor Neuman)

After our kibbutz commander, Gidon, had given everybody their marching orders, Tamar and I went back to her flat and started hanging black plastic on all the windows. It was late afternoon. Darkness was on its way and it was going to be our first night of wartime blackout. I didn’t bother hanging plastic in the shack I was originally assigned. Days before the war, Tamar and I had begun living together at her place. I got the girl of my dreams and a room upgrade all at the same time.

As a kibbutz volunteer from abroad, I was on the lowest rung of the accommodation ladder. All such volunteers were given a room of their own but it was in a sreef (shack), which was no more than an old wooden cabin left over from the first days of the kibbutz. These were the slap-dash shacks occupied by the kibbutz founders, intended for shelter only until the kibbutz was able to get on its feet. Once crops were sold and the money was flowing, housing was built out of concrete and tile. Who got into the new units was purely a matter of seniority. You could hold the highest position in the hierarchy (kibbutz secretary) but you’d still live in a shack until it was your turn to upgrade.

Our kibbutz had around 250 members and all the members had newer homes that were on the small side, but clean, solid and agreeable. None of them had a tub. Too much of a waste of water and space. Instead, there were narrow-stall kerosene showers for those who preferred not to use the communal hot showers down the path. Tamar had one of these. You would start a kerosene fire at the base of the water tank and go away for 20 minutes while your water heated. Then you’d come back, turn off the kerosene and enjoy your three minutes of hot water. If you wanted to push it, you could leave the kerosene burner on while you showered and squeeze a couple of more minutes out of the hot water supply. There was a down side to that, however. Though the burner was screened from the shower water, things could go wrong. During one of my showers, water got into my kerosene burner. It overflowed and I had the disconcerting experience of washing my upper end while flaming drops of kerosene landed around my feet.

The evening we were hanging the black plastic, Lev, the banana boss, came by to tell me he was being called up to the war and I would have to do everything I could to maintain irrigation on my own. The rains hadn’t come yet and the bananas wouldn’t recover if an irrigation cycle was skipped. He was going to try to get an exemption from the army on the grounds that the all-important banana crop stood in danger of being devastated in his absence, but he was not sure if it would come through. It wasn’t a cop-out. It was true. Lev was a banana guru and he was single-handedly responsible for the establishment of the kibbutz’s most important cash crop. Without him, there was nobody to be the banana whisperer and make the damn things thrive the way he did. I could do irrigation on my own but, for the rest, I always looked to Lev for direction.

Irrigation was done around the clock. With several fields to supply and only enough pressure for one field at a time, I would have to be changing taps, cleaning filters and dumping fertilizer at various times of day and night. I would have to catnap between sessions and try to be awake enough to stay on top of the schedule. I told Lev I could do it and he went away satisfied. Tamar looked at me as if I was crazy to agree but she was an Israeli, she understood. Then Lev came back and told me I could use the Willis and I was much happier. The jeep would get me to the fields a lot faster than the tractor. More time to rest. More time to sleep.

But not that night. The war was edging closer to our ordinary lives and, all night long, vehicles of all kinds were coming and going. There was the noise of a truck pulling up, the sound of boots pounding past our window, loud voices giving orders, the truck driving away, then silence. The same sequence repeated over and over again.

By morning, the kibbutz wasn’t the same place. All our trucks and buses were gone and so were all the young men and some of the young women. Why not all the young women? Because, while the Israeli army gave weapons training to both sexes, there were still some traditional attitudes toward women in war. The women all knew how to handle weapons but, somehow, when push came to shove, they never ended up on the front lines or in tanks or in planes. In war – at that point in time – their duties were confined to nursing, communications and secretarial work. Most of the young women reservists, like Tamar, remained on the kibbutz, along with the older folks. With them was a ragtag bunch of hapless tourist-volunteers wishing they had picked another time to experience life on a kibbutz. And then there was me: a volunteer worker who had become a candidate for kibbutz membership. And now we were running the show.

Gidon dropped by to talk to me.

“Are you going to the fields after dark?” he asked.

Conversations with Gidon were never anything but straight to the point and businesslike. He never had much of a sense of humour at the best of times and he now had the safety of 250 people in his hands. He felt the weight of it deeply and I wasn’t about to make his job any harder.

The next night, Tamar and I signed ourselves out and headed for the fields. I drove. She sat next to me with her Uzi resting on her lap. When I got to the irrigation pipes, I got out and, in the glare of the jeep’s headlights, I cleaned the filters, dumped sacks of fertilizer into the tanks, reset the flow timers and hopped back into the vehicle. All the while, Tamar kept her weapon at the ready and scanned the shadows of the banana trees for trouble.

There was a beautiful full moon out. A lover’s moon, just for the three of us. A guy, a gal and her Uzi. This was dating, Israeli style.

(Previously: “Learning the lay of the land”; “When Afula road went quiet”)