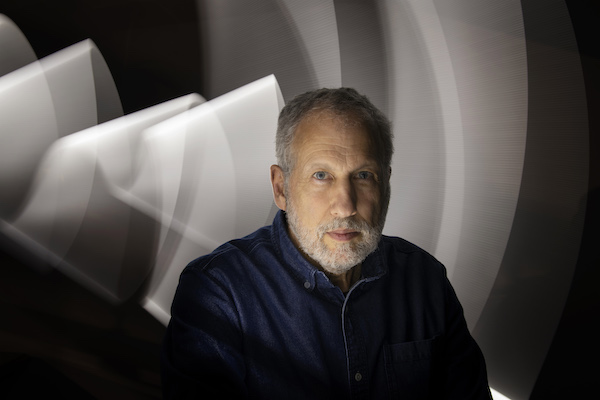 Photograher David Cooper in a self-portrait.

David Cooper is renowned for the skill with which he captures energy and light in photographs and film. But the multiple-award-winning artist was not appointed a Member of the Order of Canada in 2020 only for his “innovative contributions to Canadian performance photography,” but also “for his dedicated mentorship of emerging artists.” One of the many ways in which he has shown that dedication is his support of the Downtown Eastside (DTES) community in which he is based.

Cooper has taken countless photographs for the DTES Heart of the City Festival since the annual festival began 19 years ago, and for Vancouver Moving Theatre – the festival’s main presenter, along with Carnegie Community Centre and the Association of United Ukrainian Canadians – for at least three decades. The festival photo sessions at his studio have been community-building gatherings and the festival provides copies of their photos to the culturally and socially diverse artists who live, perform and create in the neighbourhood. This year’s Heart of the City takes place Oct. 26-Nov. 6, with more than 100 events throughout the DTES and online.

It was Vancouver Moving Theatre co-founder Terry Hunter who introduced Cooper to the Heart of the City Festival, since it involved artists, writers, singers and storytellers and Cooper’s career has always been in the arts. Though that wasn’t always where his interest lay.

“I started training at U of T [University of Toronto] for architecture,” Cooper told the Independent. “It was a five-year undergraduate program and I came out west after my second year, as a break. I’ve always had a camera but never had formal photography training beyond a summer course at Banff when I was a teenager. Through a friend, I checked out a local theatre company to see if they needed any photos taken. Eventually, I was given a chance to shoot a play at the Vancouver Playhouse Theatre, directed by Christopher Newton. They were really excited about the results from a dress rehearsal and offered me a job. I spent four years there in the publicity department, also creating posters and marketing material.”

Cooper is from Forest Hill in Toronto. He grew up in a conservative Jewish neighbourhood. “I went to Hebrew school but I stopped practising Judaism when I moved out west from my family,” he said. “I still go back for special occasions and joined the JCC here in Vancouver.”

As a theatre, dance and music photographer for more than 40 years, Cooper’s photos and videos have publicized more than 60 companies throughout Canada and the United States. The Shaw Festival, Bard on the Beach, Arts Club Theatre, the Royal Winnipeg Ballet, 605 Collective, Karen Flamenco Company, Vancouver Opera, Vancouver Symphony, Electra Women’s Choir, Chor Leoni Men’s Choir, Spirit of the West and Uzume Taiko Drummers are just a dozen-plus of the groups with which he has worked. He has been a stills photographer for several TV series and his dance videos have been shown internationally. In addition, he teaches and mentors students, holds workshops for both amateur and professional photographers, and photographs for theatre and dance schools.

Among the many recognitions Cooper has garnered, he received a Jessie Richardson Theatre Award in 1995 for his outstanding contribution to the Vancouver arts community and was elected a pioneer member of the B.C. Entertainment Hall of Fame in 2006.

“I’ve mostly been a theatre photographer, shooting live shows,” said Cooper. “I spent 15 years shooting film and transitioned to digital in 2001. It was a Canada Council grant in 1978 that took me to the Royal Winnipeg Ballet to learn more about ballet and I spent two weeks in class and rehearsals documenting the process.”

“I have worked with a great graphic designer and art director, Scott McKowen, for 30 years, photographing marketing materials for the Stratford Festival, the Shaw Festival, Yale Repertory Theatre, Canadian Stage, Theatre Calgary and others together,” said Cooper of how the publication came to be. “He suggested we compile all our work into a book and include my dance work that is separate from the theatre.”

According to Firefly’s website, the book includes essays on Cooper’s theatre photography (by Newton, artistic director emeritus of the Shaw Festival), on his dance images (by Vancouver writer and arts commentator Max Wyman) and on his marketing images (by McKowen). Ballet dancer Evelyn Hart “has contributed an appreciation, and Cooper himself discusses the most intimate relationship between photographer and subject – portraiture.”

When asked what the most gratifying parts of his career are, Cooper told the Independent: “Working with talented performers. Getting to travel all across Canada and the U.S. shooting for different arts organizations.”

For more information on Cooper, visit davidcooperphotography.com. To purchase a copy of David Cooper Body of Work, go to fireflybooksstand.com. And for the lineup of this year’s Heart of the City Festival, check out heartofthecityfestival.com.