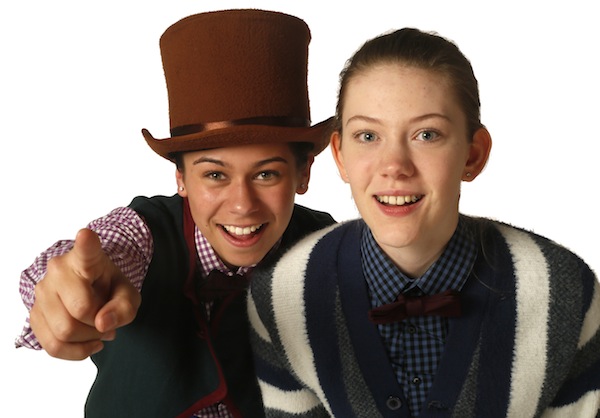 The cast of Arts Umbrella’s production of James and the Giant Peach includes Teilani Rasmussen (as Ladahlord), left, and Sophie Mercier (as James). (photo by Tim Matheson)

“Well, maybe it started that way. As a dream, but doesn’t everything. Those buildings. These lights. This whole city. Somebody had to dream about it first. And maybe that is what I did. I dreamed about coming here, but then I did it.”

Roald Dahl (1916-1990) wrote some of the most-known children’s books, including The Gremlins, Charlie and the Chocolate Factory, Fantastic Mr. Fox, Matilda and, published in 1961, James and the Giant Peach, from which the above quote comes. Still as relevant as ever, and adapted into a musical about a decade ago, James and the Giant Peach is “wildly entertaining,” director Erika Babins told the Jewish Independent in an interview about Arts Umbrella’s Expressions Theatre Festival, May 17–25. “The music is written by Benj Pasek and Justin Paul, who wrote the music for La La Land, The Greatest Showman and Dear Evan Hansen, to name a few. I find I always have at least one of their catchy songs stuck in my head. There’s also puppets!” she said.

James and the Giant Peach is one of four productions featured in the festival. The others are Peter Pan (by J.M. Barrie), Animal Farm (adapted by Nelson Bond from the novel by George Orwell) and Into the Woods (music and lyrics by Stephen Sondheim, book by James Lapine).

“Choosing the Expressions Theatre Festival shows is an involved process that starts at least a year in advance. We’re already choosing shows for our 2020 festival,” said Babins, who is a member of the Jewish community. “Each troupe director is responsible for choosing the show their troupe will perform.

“As directors, we keep in mind the strengths and areas of growth we see within our cast,” she said. “We want to ensure that the skills students develop throughout the year build upon or differ from those we explored in past years. For shows, we want to choose something that can challenge and engage our students throughout the rehearsal process. At the same time, we want to select shows that will appeal to our audience, which includes a large number of students who attend school matinées that run along with our public performances.”

The Arts Umbrella promotional material summarizes the plot of James and the Giant Peach: “When James is sent by his conniving aunts to chop down their old fruit tree, he discovers a magic potion that results in the growth of a tremendous peach … and launches a journey of enormous proportions. Suddenly, James finds himself in the centre of the gigantic peach, among human-sized insects with equally oversized personalities. After the peach falls from the tree and rolls into the ocean, the group faces hunger, sharks and plenty of disagreements. Thanks to James’ quick wit and creative thinking, the residents learn to live and work together as a family.”

“I chose James and the Giant Peach for myriad reasons,” Babins said. “Last year, the Junior Musical Theatre Troupe performed Guys and Dolls, a classic musical with a lot of realism. James and the Giant Peach is pretty much the opposite of that: it’s a contemporary show written with lots of theatricality and wonder. I also find the themes in the show particularly universal for the age range of 13-to-16-year-olds who perform in the show. In the musical, the theme of chosen family comes up a lot – the idea that you have the right to surround yourself with people who make you feel safe and happy, and that you’re allowed to distance yourself from those who make you feel bad or hurt you.”

Babins has been working at Arts Umbrella as the choreographer for the Senior Musical Theatre Troupe since 2012, and she began teaching in the general and yearlong theatre programs in 2014. “We started the Junior Musical Theatre Troupe just two years ago and the original director is taking a leave of absence, so I was asked to helm this production,” she said. “I was more than happy to take on the role.”

Playing the role of James in the Arts Umbrella production is 15-year-old Sophie Mercier. “She brings both a maturity and an emotional vulnerability to the role, which James needs to have in order for the audience to care about his journey,” said Babins.

When asked about the most fun aspect of this production, Babins said it was “playing into all the theatrical moments.”

“The show is a play within a play, with the narrator introducing us to all the characters and themes at the beginning of the show. We have a lot of fun breaking the fourth wall and bringing the audience in on the magic of theatre,” she explained.

As for the most challenging part, she pointed to the set changes. “We have some big and elaborate set pieces,” she said, “and I often ran out of hands to move them around the stage. But I think we have found some clever solutions to those challenges.”

The Expressions Theatre Festival opens and closes with Into the Woods (May 17 and May 25, 7 p.m.), which runs a few times during the festival. James and the Giant Peach will be performed twice: May 19, 4 p.m., and May 23, 7 p.m. For more information about the festival and the full performance schedule, visit artsumbrella.com/expressionstheatre. Tickets start at $12 and the shows take place at Waterfront Theatre on Granville Island.