One of the symbols of Rosh Hashanah is the fish head – “God will make you the head, not the tail” is the blessing. Fish is often served at one of the holiday meals and here are a few salmon recipes that would be nice to serve for lunch or brunch.

(This recipe is adapted from Food & Wine. It makes 8 servings.)

SALMON BURGERS
(This recipe comes from Rick Moonen of RM Seafood in Las Vegas with my changes. It makes 6 servings.)

SMOKED SALMON AND ONION FRITTATA MUFFINS
(This recipe comes from Foods You Want for the Life You Crave by Nealy Fischer. It makes 4 to 5 servings.)

Sybil Kaplan is a journalist, editor of nine kosher cookbooks (working on a 10th) and a food writer living in Jerusalem. She has written the kosher restaurant features for janglo.net since 2014 and leads weekly English-language Shuk Walks in Machane Yehuda.

The print edition’s cover photo of the salmon run on Adams River by Leah Ramsay was taken in 2010 at Tsútswecw Provincial Park, near Kamloops, B.C. Formerly named after conservationist and author Roderick Haig-Brown, the park was renamed Tsútswecw this past June. 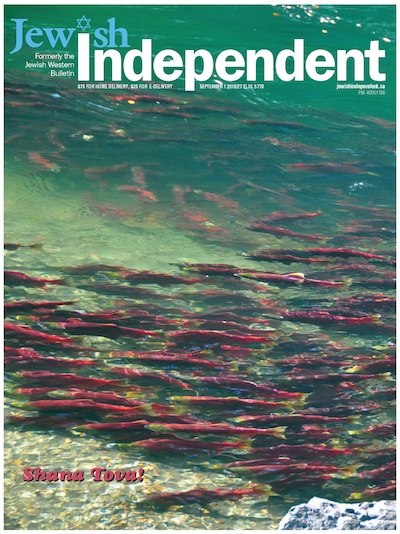 Tsútswecw (pronounced choo-chwek) translates to “many rivers” and the park, established in 1977, encompasses the spawning beds of the sockeye, chinook, coho and pink salmon. Every fourth year is a “dominant” run, with millions of salmon returning – 2010, when this photo was taken, was a dominant year, as is 2018. In honour of the occasion, there is a festival held at the park, called Salute to the Sockeye, which runs this year from Sept. 28 to Oct. 21.

One of the symbols of Rosh Hashanah is the fish head – “we should be the head and not the tail.” There are the themes of creation, rebirth and renewal, as well. In the run, the salmon return from the ocean to their natal stream to spawn, after which most die, their bodies providing nutrients to the vegetation and animals, and the lifecycle begins anew. This all happens in British Columbia from September through November.

“Seeing one of the peak years of the Adams River sockeye run had been a desire for many years and it didn’t disappoint,” said Ramsay. “Even non-hardcore nature nerds are impressed – it is such a huge mass of life all moving to the same goal.”