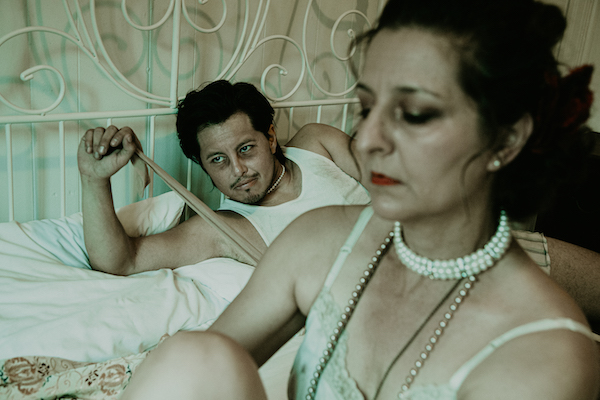 Vicente Sandoval and Sylvia Zaradic are among the cast of Raincity Theatre Company’s Cabaret, which opens Oct. 15. (photo by Nicol Spinola)

Given the excellence of its previous two site-specific immersive musicals – Sweeney Todd: The Demon Barber of Fleet Street and Company – it can be expected that Raincity Theatre Company’s Cabaret will be provocative and entertaining, a most memorable night.

For Cabaret, Raincity will create its own Kit Kat Klub at 191 Alexander St. in Gastown Oct. 15-Nov. 4.

Audiences will be transported to the sexy and somewhat scary fictional nightclub. The story centres around singer Sally Bowles (played by Jessie Award-winning Alex Gullason), who works at a sleazy establishment in Berlin. Set in 1931, the club’s “outrageous Emcee becomes a mirror reflecting a society spiralling toward disaster with the rise of Hitler’s Nazis.”

“Cabaret is a cautionary tale about the dangers of apathy in the face of hatred,” producer Kat Palmer told the Independent.

“Given the increasing surge in racism (particularly antisemitism) and homophobia, we can all learn a lesson from this show,” she said. “It is no secret that antisemitism increased during the COVID-19 pandemic – even close to home. I recall a recent case in Richmond, where a wooden post with the message ‘COVID is Jew World Order’ was found on a busy street. This eerily echoed much of the anti-Jewish Nazi propaganda that existed during the time our show is set.

“The time may come when Cabaret will seem like an artifact of a distant and unremembered past. But, sadly, we are nowhere near that point, and we are not likely to get there any time soon.”

For people concerned about being in an immersive performance of a musical with such dark elements, director Chris Adams said, “I would implore them to come anyway. I believe we learn, work and grow in the uncomfortable, but I can assure you, although the actors will be close, there is no audience participation and everyone will have a fantastic, intimate, view of the show.

“The other wonderful thing about a venue like this,” he added, “is seeing … your own version of the show, depending on what you are watching and where you are looking. We’ve created a world for you to witness, so come on out and embrace it.”

That said, Palmer, who is a member of the Jewish community, admitted, “Being a third generation survivor, this show has brought up some intergenerational trauma I was not prepared for. It has reaffirmed my commitment to continue to speak up for justice, speak up for diversity and speak up for tolerance. Most importantly, to speak up for those who had their voice taken much too soon – to remember the millions of lives lost and think about what I can say and do to make sure this never happens again.”

“Working with a researcher is invaluable,” said Adams of Groberman. “As a director, I can read and watch everything I can and everything I think will come up before rehearsals begin, however, there are always surprises in the room. And I think there should be surprises, actually. Being able to turn to Michael and ask questions as we go, as we work and as we create, allows us such freedom.”

“The musical from 1966 was based on the 1951 play I Am a Camera, which itself was based on a series of related short stories by the British writer Christopher Isherwood, whose fiction was autobiographical,” Groberman explained. “Like the narrator of his [novel] Goodbye to Berlin (1939), Isherwood traveled to Berlin in 1930 to enjoy the bars, cabarets and sexual openness of Weimar Berlin. He wrote at the start, ‘I am a camera.’ He was there to witness what he found, and to write about it.”

One of the aspects of the stage production that surprised Groberman was that Sally Bowles, as characterized by Isherwood, is actually a very bad singer and even worse performer. “I imagined the role demanded a Liza Minnelli performance, belted and big,” he said. “I was wrong.”

He also shared a 2021 interview in the Guardian with composer Fred Ebb, who talked about the original Broadway production. “It was Hal [Harold] Prince, the original director, who came up with the breakthrough idea that the songs of the Emcee, played directly to the audience, would be a metaphor for the soul of Germany as the Nazis rose to power,” said Groberman. “Prince also called it ‘a parable of contemporary morality,’ one that he saw as drawing parallels between the spiritual bankruptcy of Berlin in the 1920s and America in the 1960s. This ability to be continuously relevant, as much as its fabulous songs, keeps the show’s flame alive.”

What also keeps it relevant are the creative choices different productions make. “For example,” said Groberman, “one of the main characters, Cliff, has a sexuality that shifts from production to production. Why these directorial choices?”

As the director, Adams not only has to makes these types of decisions, but pragmatic ones, including how best to present the piece on a “thrust stage, or a three-quarter round,” where the audience sits on three sides of the stage.

“Above and beyond the stage itself, is, of course, the entire venue,” said Adams. “We have to move the Kit Kat dancers around the space and I had to find points in the script that lend themselves well to utilizing different areas of the venue. For instance, if the script mentions getting a drink at the bar, then the actors will go to the bar, the same bar the audience members just purchased a drink at. We learned early on, when producing and directing in unusual spaces, you cannot ignore them – you must embrace them.

“New this year for us is VIP seating with a VIP entrance, something we couldn’t have done at our previous venues,” added Adams. “This venue lends itself to the world we need it to be – seedy, dark, but beautiful, where the drinks can flow all night.”

VIP seating includes a complimentary drink and the most immersive experience audience members can have. Since the musical deals with adult subject matter, Raincity asks that “viewers under the age of 19 not purchase VIP seating” and notes that “children under the age of 12 are not permitted.”

For tickets to Cabaret, visit raincitytheatre.com.