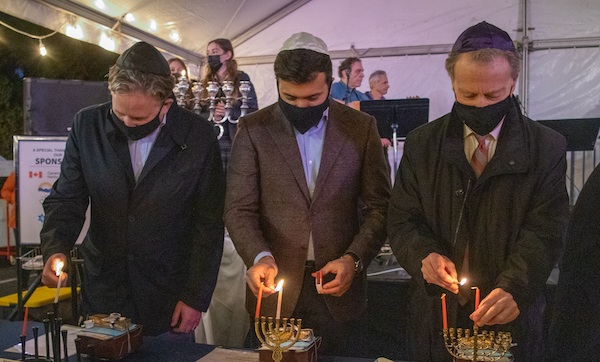 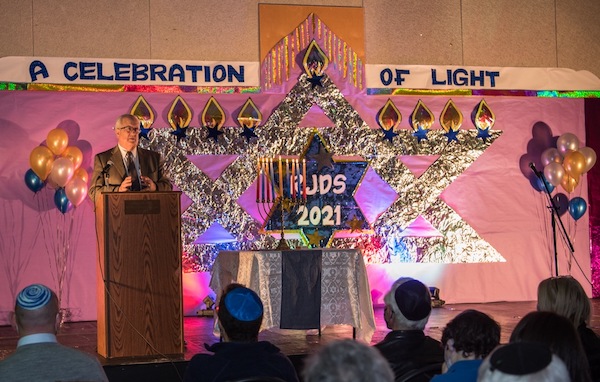 Richmond Jewish Day School is on No. 5 Road, which has been named the “Highway to Heaven” because it is home to more than 30 places of worship, education and cultural practice. The temples, churches and religious schools all celebrate light during the winter season and RJDS’s Celebration of Light event celebrated the diversity within the school and throughout Richmond.

On the last night of Chanukah, Dec. 5, RJDS hosted a night of coexistence, unity and light. After parking at the India Cultural Centre, folks aged 5 to 70 lined up at the entrance as the school gym filled with excitement. The night moved through hopeful speeches given by Ezra Shanken, chief executive officer of the Jewish Federation of Greater Vancouver; Rabbi Yechiel Baitelman of Chabad Richmond; Rabbi Susan Tendler from Beth Tikvah Congregation; Richmond Mayor Malcolm Brodie; and Richmond City Councilor Bill McNulty. The words “bridges,” “freedom,” “unity,” “light” and “together” echoed. Also in attendance were city councilors Andy Hobbs and Alexa Loo, showing their support.

The RJDS Choir sang classic Chanukah songs, including a piece that called upon the audience to “celebrate our light,” and the school’s Israeli dancers showcased two Israeli dances.

The voices of RJDS’s neighbours were also heard. The school sent the question out to the community asking what “light” means to them during this holiday season. Each response had a different point of view, however, at the core, every answer reflected on hope, optimism, knowledge, community, compassion, joy, openness, anticipation and the goodness in humanity. Respondents included Navshina Savory from the Richmond School District, Umran Bhatti from the Ahmadiyya Muslim community, Balwant Sanghera from Gurdwara Nanak Niwas (and chair of the Highway to Heaven Association), Edward James Wong from St. Monica Parish Roman Catholic Church, Baha’i community representatives, and Russ Klein and Rabbi Stephen Berger from King David High School. They all had thoughtful insights and their participation was appreciated, as was that of everyone who spoke at, attended and otherwise contributed to this event.

On their way out, guests could help themselves to coffee, water and Chanukah delights like latkes, sufganiyot and other fried goods. The night ended with hearts filled with the warmth that unity, a strong community and good food on a cold winter night can bring.

Imagine facing a drought. Approximately 2,000 years ago, the rabbis in the Babylonian Talmud felt that calling for a fast day might alleviate it. In the talmudic tractate of Taanit, the main issue is that of when, why and how a fast day could be called. Yet, also in Taanit, we’re introduced to Honi HaMe’aggel, or Honi, “the circle maker.”  There’s some indication that means he could have been a roofer, as this was a tool they used, but, in this tractate, Honi is like a miracle maker.

When Honi is called on by his community to pray for rain, he doesn’t fast. He draws a circle on the ground, stands within it, and says he will not move until it rains. He has some stops and starts. At first, the rain is very light and then, when he prays for more rain, it becomes too heavy. He creates what amounts to a flood, because, previously, the talmudic rabbis have suggested one should never pray to stop the rain. That is, when it’s raining, we are to be grateful, even if it’s too much rain.

The rabbis describe Honi as someone who is like a kid bargaining with and demanding things from his father – but his father is G-d. This infuriates the rabbis, but, at the same time, they are grateful for the rain. In Taanit, page 19a, Shimon ben Shetah, head of the Sanhedrin (rabbinic court) says: “Were it not Honi, I would have decreed that you be ostracized, but what can I do to you?”

Call it what you will, Honi’s magic or miracles or unconventional approach worked. Maybe it was too much rain, but he made it happen. His technique didn’t require formal schedules for fasting or abstaining from work or sex. He was willing to talk directly to the most powerful presence and demand results. He talked turkey and worked outside the system.

Even today, there are lots of parallels to this. Maybe the Sanhedrin’s rabbis don’t rule our world, but our politicians and government infrastructure do. Maybe, too, there are “miracle makers” who work outside of the normal routines in our midst. The rabbis’ approach to things was very rule-bound, but they left room for the fact that we’re human and that, sometimes, other approaches might work.

I recently was invited to an outdoor neighbourhood get-together. My partner wanted to nix it at first as it went without saying that every gathering is risky these days due to COVID. Yet, everyone kept the rules and safety in mind from the first. The organizers scanned everyone’s vaccination status – open to vaccinated people and their kids only. The party was outside. Masks and social distancing were required.

This was our first in-person party since March 2020 and I felt apprehensive. Oddly, the entire encounter reminded me of the rabbis’ need for order and Honi the Circle Maker. Most, if not all, of those attending the gathering lived in houses built long ago and the conversations in many cases revolved around old home repair and refurbishment.

As I kept track of my twins, who played in the snow, climbed into a tree house, checked out the river bank, chased a dog and checked out fire pits, I eased into and out of conversations where I heard so much about how we can informally help each other out. Offers of tools, assistance on projects or just commiserating about weird past renovation discoveries floated through the air. I also heard people sharing stories about loved ones, catching up, and meeting new babies.

Honi worked under adverse weather conditions. It was a drought, and then it was a flood, and he still stood in that self-made circle. It’s not an exaggeration to say that a safe COVID-era get-together in December in Winnipeg is also not ideal. It was -8°C when we arrived at the party, -11°C when we left two hours later. A front came through, so the winds meant it felt colder. We were bundled up and still enjoyed ourselves. That said, I won’t lie, I couldn’t feel my toes and my husband slipped on ice on our way back to our car. We were extremely grateful to go home and enjoy central heat as the temperature dropped below -20°C and the wind chill fell to -32°C. Our kids fell into bed with exhaustion that night.

Rabbis (and neighbours) know that magic can be made sometimes by people who aren’t completely paralyzed by the rules but use them to make change. We broke our “long fast” when it came to parties and joined together with others for a social event. It felt just like when it rains and breaks a drought.

As we well know, sometimes it’s way too much rain or too much unpredictability. I wouldn’t want to always rely on Honi for rainfall or on pop-up neighbourhood gatherings to fix all our socializing or old house repair needs. However, there’s something rich and meaningful in those snippets and exchanges. There’s a bit of hope, magic and discovery as we make connections in person, with people who share our interests.

The rabbis marked victories, milestones, holidays, weather and lifecycle events with prescribed rituals that took lots of preparation and work. To some extent, this saved Judaism after the fall of the Temple and made it work for thousands of years. Meanwhile, they lived in a time when magic, soothsayers, idols and false prophets existed, too. Our lives dangle somewhere in between. There was magic in that first social gathering, the friendliness and possibility. It accompanied the knowledge that the people at that party, who choose these older Victorian or Craftsman homes, are comrades in a way. They physically do a lot of the hard restoration work, too.

As we dangle between 2021 and 2022, here’s hoping that your secular new year is both one of safety within the rules and a bit of magic, too.