On May 8, Canadian Hillels in partnership with the Centre for Israel and Jewish Affairs (CIJA) released Going Somewhere? The Canadian Guide to Jewish Campus Life. Inspired by Maclean’s annual university guide, Going Somewhere? Provides students with information about Jewish life on campuses across Canada, as well as tips on how Jewish students can make the most of their first-year experience. 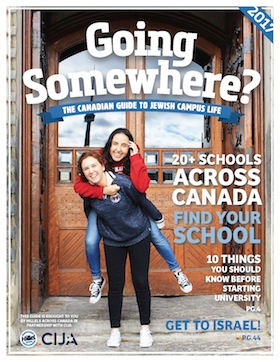 “We are proud to publish the first coast-to-coast Canadian guide to Jewish life on campus,” said Marc Newburgh, chief executive officer of Hillel Ontario, in a statement. “For Jewish students, the university experience provides a unique opportunity to connect with their community, shape their Jewish identity for the long-term and develop skills by engaging in Jewish and pro-Israel advocacy. Our hope is that Going Somewhere? will prove a valuable resource for students and their families.”

Judy Zelikovitz, vice-president of university and local partner services at CIJA, added, “CIJA is pleased to have contributed to Going Somewhere?… As the only Jewish student organization with staff on the ground at schools across the country, Hillel offers an unparalleled window into everything Jewish on campus. The practical advice and campus-by-campus details in Going Somewhere? make for required reading for every Jewish student as they consider their options for the fall.”

To download a free copy of Going Somewhere?, visit gettheguide.ca.

Earlier this month, the Centre for Israel and Jewish Affairs (CIJA) announced the establishment of an LGBTQ Advisory Council. “Our LGBTQ+ family and friends are an integral part of the Jewish people and Canadian society as a whole,” said CIJA chair David J. Cape in a statement. “We are excited to launch this vital initiative, which brings together a talented and diverse group of leaders and young professionals for the goal of strengthening our ties with the LGBTQ+ community. We look forward to working with the LGBTQ+ Advisory Council, which will play a crucial role in providing CIJA with guidance on policies and issues, while expanding our capacity to connect with the broader LGBTQ+ community on matters of common cause.”

Tom Chervinsky, chair of CIJA’s LGBTQ+ Advisory Council, said, “As someone who is Jewish and gay, I am heartened to see both the support and importance that the organized Jewish community is placing on building strong bridges of friendship and cooperation with the LGBTQ+ community. Our Jewish and sexual/gender identities are fundamental to who we are. Being able to integrate our whole selves into the fabric of both these communities makes each community, and all of Canada, stronger. It is an honour to get to work with so many dedicated Canadian volunteers to help make that possible.”

The council consists of 14 members from seven provinces. It includes both Jewish and non-Jewish members with a diverse range of professional and political backgrounds, including experience in law, academia, business, politics, advocacy and Jewish community work. A full list of members, including biographies, may be found at cija.ca/lgbtq.

CIJA has been involved in various LGBTQ+ advocacy activities, even before the creation of the council. This involvement includes sponsoring outreach events at various Pride festivals across Canada and serving as one of several organizations on the executive of Trans Equality Canada, a coalition urging Parliament to pass Bill C-16 to strengthen human rights and hate crimes protections for the transgender community.

A screenshot of the CIJA video What Would We Do?

The continuing terrorist attacks in Israel against Jewish Israelis are becoming more frequent and more deadly. Palestinian political leaders, religious officials and media have applauded the attackers as “martyrs,” spread anti-Jewish conspiracy theories and called for more attacks against Jews. In response, the Centre for Israel and Jewish Affairs (CIJA) has launched a campaign to mobilize community members to take action.

The objective of the campaign is to raise awareness among Canadians about the ongoing threat of Palestinian terrorism and the incitement that fuels it. CIJA is asking the community to take a number of actions, including sharing content in social media, signing a petition that will be presented to Canada’s leaders when Parliament returns and writing Foreign Affairs Minister Stéphane Dion asking him to speak out against Palestinian terrorism.

“Like many around the world, we are extremely concerned about the rising tide of violence against Jews in Israel, perpetrated by terrorists who are incited to violence by the Palestinian leadership,” said Shimon Koffler Fogel, CIJA chief executive officer. “We want to provide our community with a meaningful way to stand up for our extended Jewish family in Israel who are living under constant threat.

“The Take Action campaign is designed to raise awareness about the violence and what drives it,” continued Fogel. “Questions we are asking Canadians to consider include ‘What would we do if this were happening in Canada?’ and ‘What would we expect our allies to do if Canadians were being run down, stabbed and shot in the streets?”

Campaign components include the video at youtube.com/watch?v=cMYS1qSKQTs called What Would We Do? The video is a series of news clips that take real events that have happened in Israel, such as stabbings and car bombs, and put them into a Canadian context, as having happened in Montreal, Toronto and Winnipeg.

As well, people can donate to help spread the word: 100% of donations will be used to educate Canadians about the reality of the situation in Israel, the dangers posed by Palestinian terrorism and incitement, and the real obstacles to peace.

The fourth component of the campaign is a request that people forward the call to action to a friend, share it on Facebook, Twitter or other social media, and encourage friends and family to visit the website takeactionisrael.ca, as well as to learn more about the situation in Israel at learnmoreisrael.ca.

The campaign will run as long as the current wave of terror continues.