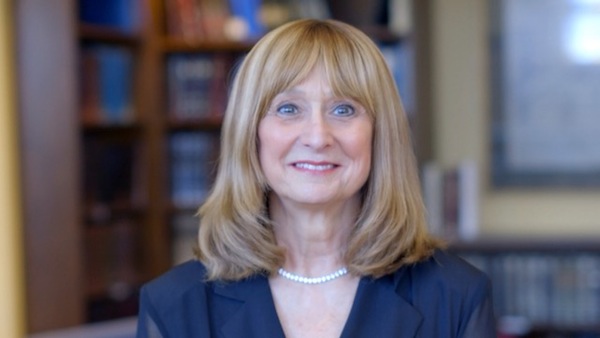 Vivian Claman was one of the founders of Shalhevet Girls High School and served on the school’s board for 14 years. (photo from Vivian Claman)

Vivian Claman was one of the founders of Shalhevet Girls High School. More than 14 years later – during which time she has served on the board of the school, including until recently as president – she is being celebrated at the school’s 2022 gala celebration May 22.

Leslie Kowarsky, president of the Shalhevet board, credits Claman with the school’s very existence.

“There is no one in our community who has not benefited from Vivian’s efforts, whether for Schara Tzedeck, for the Jewish Federation, or for many other worthy causes,” said Kowarsky. “I can say with confidence that Shalhevet would not exist without her tireless commitment.”

Shelley Rivkin, vice-president of the Jewish Federation of Greater Vancouver and the honoree at last year’s gala, echoed those words.

“Vivian has shown unswerving dedication and passion to maintaining and strengthening Orthodox education for girls in Vancouver,” Rivkin said. “She is a dynamic and energetic volunteer and she brought this commitment to her work on Federation’s allocation committee and other community organizations.”

Claman reflected back on the school’s creation. Ten parents, including Terrance Bloom, who would serve as the first board president, came together to address where their daughters would continue their education after they completed Grade 7 at Vancouver Hebrew Academy (VHA).

“My daughter was one of six girls in the Grade 7 class,” Claman said. “We had a little evening meeting to discuss the idea of doing a high school for the girls. My daughter said, I’m willing to try and convince the other girls to try, so we started the school.”

The availability of Orthodox Jewish education in Vancouver has been a recurring challenge and is among the range of issues being address by a new initiative called Torah West, which seeks to retain and attract more Orthodox Jews to live in Vancouver.

VHA now offers Orthodox education for boys up to Grade 10 and Claman said talks are underway to move the boys school and Shalhevet under a shared administrative umbrella.

“It makes the most sense, certainly for the donors,” she said. “They would prefer to have one institution so that we are not separate institutions going to the donors and asking for money.”

Whatever administrative structure is adopted, there will always be a separate boys school and girls school, adhering to Orthodox standards, she said.

Shalhevet is experiencing challenges that reflect larger trends in the community. With the departure of the Pacific Torah Institute yeshivah, some Orthodox families have left Vancouver.

“We absolutely need to have a strong Orthodox community and the only way we’ll do that is if Vancouver Hebrew Academy thrives and Shalhevet thrives,” said Claman. “Right now, though, to be honest, we’ve had a lot of attrition in the last couple of years. We are down numbers in our school. It is very upsetting, but that’s the reality of Vancouver. We kind of have waves. We have ups and we have downs. Right now, we are in that slump. That’s one of the reasons why Torah West is being created.”

In the school year now winding down, there are 10 students across five grades at Shalhevet, down from a peak of 25 or 27, she said.

While those numbers are disappointing, she said, there is a silver lining.

“Because of small numbers, we really can cater to the individual needs of each girl,” she said. “That’s really important. There are a lot of girls who have different issues and it’s really wonderful that they get that kind of attention. At a normal high school, there could be 30 kids in the classroom. The competition is pretty fierce.”

She added that single-gender education has been demonstrated to be advantageous, especially to girls.

“Studies have shown that girls do extremely well when they are on their own without feeling the competition or the pressure of being around boys,” said Claman. “It really does make a difference.”

On being recognized at this year’s gala – the first in-person gala in three years – Claman said she is “overwhelmed, to be honest.”

“I just announced my retirement plan – I had warned them I was going to be leaving the board after 14 years. I thought it was enough – so they decided to honour me. I’d really prefer not to be, but I didn’t really have a choice in the matter,” she said, laughing.

However, she acknowledged: “It’s a really nice way of the school showing appreciation for the many years of really hard work I put into the school.”

As past president, Claman still attends every board meeting and remains very active in school affairs. Nevertheless, as time permits, she plans to devote more hours to her emerging role as a painter.

“I was a fashion designer by profession for many years,” she said. “I retired because it was just too much time away from being a mother of three kids.”

Because she likes being busy and creative, Claman took up painting about seven years ago.

“I had taken a class many years ago in acrylic with a teacher here for one year but this time I decided to take it seriously and I’ve been painting ever since,” she said.

After a friend’s dog died, Claman painted a portrait of the pet and gave it to the grieving friend. That has led to a raft of pet portraits, but she is also receiving commissions for other works as well. (Her portfolio is at vivianclaman.com, though she acknowledges she has not had time to keep it up-to-date.)

Although she is concluding her time as a board member, Claman’s commitment to the school remains steadfast.

“To me, the most important thing about Shalhevet is we provide an Orthodox education for the Orthodox families here,” she said. “It’s wonderful to have a pluralistic community, but we absolutely must have the common denominator of the Orthodox community here. Orthodox families will not live here unless they know that they can send their kids, their girls and boys, to a high school that caters to their guidelines as to what an Orthodox Jewish education should be.”

For tickets to the May 22, 6:30 p.m., gala, which takes place at Schara Tzedeck Synagogue, visit shalhevet.ca.