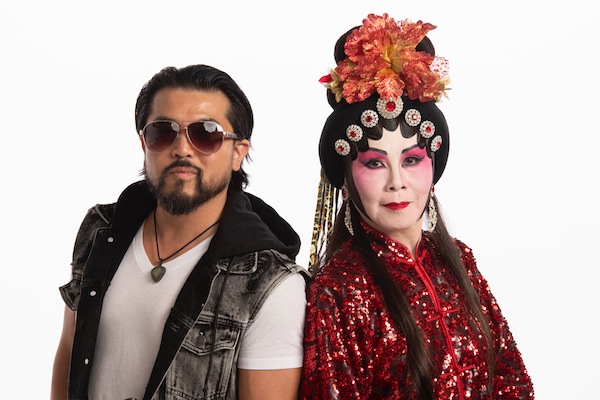 Among the many artists participating in this year’s Downtown Eastside Heart of the City Festival is Jewish community member Elliot Polsky. The multi-percussionist joins the Son of James Band in Tale of the Eastside Lantern, a workshop presentation of a new hybrid Chinese rock opera.

From Oct. 30 to Nov. 10, the annual Heart of the City offers 12 days of music, stories, theatre, poetry, cultural celebrations, films, dance, readings, forums, workshops, discussions, gallery exhibits, mixed media, art talks, history talks and history walks. More than 100 events are scheduled to take place at more than 40 locations throughout the Downtown Eastside. This year’s theme – “Holding the Light” – has emerged from the need of Downtown Eastside-involved artists and residents to illuminate the vitality and relevance of the Downtown Eastside community and its diverse traditions, knowledge systems, ancestral languages, cultural roots and stories.

Tale of the Eastside Lantern is one of the top festival picks: “In the streets and shops of Vancouver’s Chinatown, Jimmy wrestles with his personal demons and sets out to solve a mystery that is guarded by Chinese opera spirits of the underworld. Jimmy is led by the sounds of rock music and motivated by the oldest feeling in the world … love.” Written and composed by Shon Wong and directed by Andy Toth, the rock opera is produced by Vancouver Cantonese Opera and Son of James Band in partnership with Vancouver Moving Theatre. Performed in English and Cantonese, the workshop presentation takes place Oct. 31, 8 p.m., at CBC Studio 700. Tickets ($15) are available at the door or in advance from eastsidelantern2.eventbrite.ca.

Another top pick is Sis Ne’ Bi -Yïz: Mother Bear Speaks, written and performed by Taninli Wright (Wet’suwet’en) about her Messenger of Hope Walk – she walked 1,600 kilometres across British Columbia to give voice to First Nations children and other marginalized youth. Developed in collaboration with Laura Barron, Jason Clift, Julie McIsaac and Jessica Schacht, the play is produced by Instruments of Change. There are several performances Oct. 30-Nov. 3 at Firehall Arts Centre. For advance tickets ($20/$15), call 604-689-0926 or visit [email protected].

Written and performed by Yvonne Wallace (Lilwat) and directed by Jefferson Guzman, ūtszan (to make things better) follows the journey of a woman to reclaim her language; in the process, she uncovers indigenous knowledge, humour, strength and resilience. The play has three shows at the Firehall Oct. 31-Nov. 2, with tickets ($20/$15) available at the door and in advance.

Of special interest to the Jewish community, whose oral histories form part of Daphne Marlatt and Carole Itter’s Opening Doors: Vancouver’s East End, is the dramatization of that book, which was first published in 1979. Directed by Donna Spencer and co-produced by the Firehall and Vancouver Moving Theatre, Opening Doors has several performances Nov. 6-9 at the Firehall, with tickets $20/$15.

While there are these and other ticketed shows, most of the festival events are free to attend. For example, on Nov. 2, 11 a.m., at CRAB Park, there is a mini-landing of canoes, featuring a welcome ceremony, after which paddlers and guests journey on land to the Police Museum and the exhibition Healing Waters, an exploration of how communities heal through connecting to cultural practice. This landing, in honour of the inaugural Pulling Together canoe journey in 2001, launches a year of story gathering and history sharing in preparation for the 20th anniversary celebration of the Pulling Together Society at next year’s Heart of the City.

In Speaking in Tongues, guests Woody Morrison, David Ng, Grace Eiko Thomson and Dalannah Gail Bowen discuss mother tongues and how their interactions can give birth to hybrid languages such as Japanese Pidgin, which is unique to the West Coast of Canada. This conversation is part of Homing Pidgin, an interactive installation by Haruko Okano, and takes place on Nov. 2, 1 p.m., at Centre A (205-268 Keefer).

Meanwhile, Irreparable Harm? is by Sinister Sisters Ensemble – activists and theatre folk, young and old, First Nations and settlers, many of whom were arrested in the protests against the twinning of the Trans Mountain Pipeline. It uses videos, transcripts of the court proceedings and statements that were read in the courtroom to shine a light on the justice system. It is at Carnegie Theatre on Nov. 8, 3 p.m.