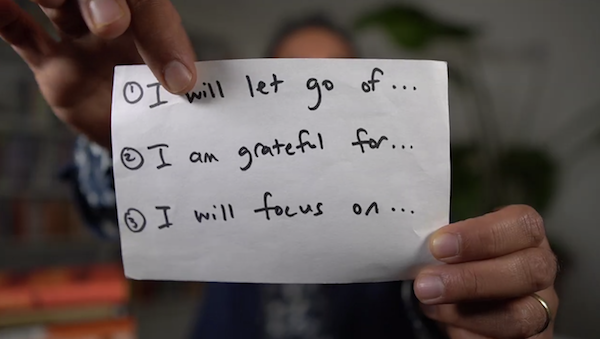 Neil Pasricha, the keynote speaker at Jewish Federation of Greater Vancouver’s The Community of Awesome event Oct. 3, contends that people can be more content in their lives if they take two minutes every morning to finish these three thoughts: “I will let go of … I am grateful for… I will focus on….” (screenshot)

In lieu of the traditional large in-person event that launches the Jewish Federation of Greater Vancouver’s annual campaign, a livestream broadcast from Hillel House at the University of British Columbia Sunday night highlighted the successes and challenges of the pandemic year.

“Donors have given more generously than ever before,” said Lana Marks Pulver, chair of the annual campaign. “Organizations have innovated faster and better. Volunteers have dedicated countless hours pitching in wherever they are needed – that includes more than 200 volunteer canvassers for the annual campaign.

“The pandemic has shown us that we are really good at overcoming challenges,” she said. “We know that, whatever the future holds, we can be there for one another and we will be there.”

Ezra Shanken, chief executive officer of the Jewish Federation, thanked sponsors, in particular Air Canada, which has provided five tickets to anywhere in North America, one for each of the five Jewish day schools in the region, to give to an educator to reconnect with family.

Candace Kwinter, chair of the Federation board, noted that, early in the pandemic, a think tank had predicted that 25% of B.C. nonprofits would not survive the economic and social consequences of the crisis.

“We are very proud that no local Jewish organization has folded,” said Kwinter. “And thank goodness, because demand for their programs and services has only grown.”

A video highlighted the work of Jewish Family Services Vancouver, one of 32 partners supported by the annual campaign. Their services include the Jewish Food Bank, a crisis line and programs for seniors to use iPads to connect with one another.

In the last fiscal year, Kwinter said, Jewish Federation distributed $11.8 million, including $3 million through the Jewish Community Foundation. In addition, the foundation distributed more than $270,000 through their unrestricted grant program, to allow community organizations to adapt.

The Oct. 3 event’s keynote presenter was Neil Pasricha, who is the bestselling author of seven books, including You are Awesome, The Happiness Equation and The Book of Awesome. He is one of the most popular TED Talks presenters. After obtaining his MBA from Harvard, he worked as director of leadership at Walmart for a decade.

The Toronto-based speaker focused on how to be happy, noting that the pandemic has resulted in higher rates of anxiety, loneliness and suicide than ever. With the enthusiastic energy of a 1950s disc jockey, Pasricha disputed what he called the assumption that happiness flows from great work, which leads to big success and then to happiness.

“It’s the opposite,” he said. “You have to be happy first, then you do great work and the big success follows.”

He suggests that everybody take two minutes in the morning to write down three commitments.

“When you wake up, I want you to spend two of the 1,000 waking minutes a day doing a little exercise,” Pasricha said. “You write down these three things. I will let go of … I am grateful for… I will focus on.…”

When we consciously think about and write down the things that bother us, he said, we live life with greater contentment and happiness.

“Saying something that is bothering you, writing it down, actually helps you get it off your chest.”