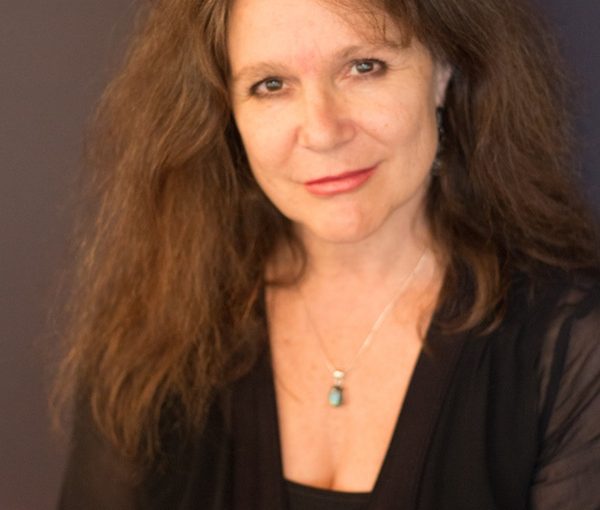 Mary-Louise Albert was not only a dancer in the first-ever Chutzpah! Festival, but its poster model (see image below).

As the 19th annual Chutzpah! Festival approaches, ready to embrace its new season – no longer a spring festival but a fall one – it will have to loosen its embrace on its artistic managing director, Mary-Louise Albert. After 15 years heading Chutzpah!, this is her last. Albert is moving on to the next part of her creative and personal journey, and the Jewish Independent spoke to her about the festival, its legacy and what might lie ahead for her.

JI: What do you think the main impact of the Chutzpah! Festival has been for the Jewish and general communities and the relationship between the two?

MA: Presenting and facilitating the growth of professional performing arts is an exciting and multi-layered approach to uniting communities. I am very proud that we have brought the festival to a point of national and international recognition, as well as being one of the flagship Jewish festivals in North America.

Through the insistence of high standards and by supporting new work, the festival has increased an understanding and appreciation of programming that embraces an eclectic range that is Jewish arts and culture, in particular from a Canadian perspective. Expanding on this programming, Jewish and non-Jewish artists share our stages, increasing our ability to bring many Canadian and North American premières to Lower Mainland audiences. Seeing, over the past 15 years, audiences from all walks of life and backgrounds embracing the festival is particularly rewarding.

JI: Have you accomplished what you set out to do when you took over the festival 15 years ago?

MA: Yes, which feels very satisfying to be able to say. I wanted the festival to not only survive but thrive in a very competitive local and national performing arts scene, which is tricky given a cultural umbrella. This meant attaining an international standard – not just a couple of high-profile shows, but across the board. It also meant the dance and music programming had to expand, which has in particular allowed for funding opportunities and artist growth.

An area I’m very proud of is connecting urban and rural communities through creation residencies. Many B.C.-based Chutzpah! artists have had creation residencies in both the North Island region and in the Norman and Annette Rothstein Theatre, resulting in world premières, with these productions going on to tour nationally and internationally. For example, this year, Geoff Berner, T.J. Dawe, Toby Berner, Tallulah Winkelman and Jack Garten will be Chutzpah! artists-in-residence for a week in Sointula, Malcolm Island, where they will perform as well. Chutzpah! will be sending UNA dance company from New York City to perform in Sointula, Port McNeil and in Alert Bay with the N’amgis nation directly before their Vancouver performances, which is a rare and meaningful opportunity for all involved. Sharing artistic wealth with underserved regions of B.C. is and has been an important aspect of the festival for the past few years. It is also in keeping with the times.

JI: In a couple of interviews I’ve read, you speak about how your training and working as a dancer was helpful to you in running Chutzpah! Could you speak a bit to that?

MA: I was trained in ballet and contemporary, danced professionally for 20 years and, within this time period, became a mother of two children. I was 45 when I stopped performing and, through support from the Dancers Transition Resource Centre, embarked on a new adventure of being the oldest “kid” in the class for a few years at Capilano U and BCIT’s Business School.

I was then hired by Gerry Zipursky [then-executive director of the Jewish Community Centre of Greater Vancouver, which is home to the Rothstein Theatre] and an inquisitive hiring committee (who I will always be grateful to) … and embarked on this job where I needed to come in running and move things forward. All this took stamina, tunnel vision, a somewhat sharp brain (and elbows), nerviness, flexibility and passion – things that a combination of dance training and a professional dance career prepares you for.

JI: In relation to Chutzpah!, what are one or two of your “I’m most proud of” moments?

MA: There are so many that I am proud of, but I would have to say the festival has been a trailblazer in presenting Israeli artists – and often in their first Canadian or North American appearances. Artists such as the Idan Raichel Project, Kibbutz Contemporary Dance Company, Batsheva Dance Company, Balkan Beat Box, Yemen Blues, Idan Sharabi, Roy Assaf, Avishai Cohen Quartet, Itamar Borochov Quartet, Dudu Tassa, Diwan Saz, Maria Kong, Baladino, Victoria Hana, David Broza and Mira Awad, A-WA and many more. And continuing this year with AvevA, Yemen Blues, Guy Mintus Trio, and Rami Kleinstein.

As well, I’m very proud of the growth of the dance and music programming and how this growth has affected positively and in a multi-faceted way the artistic development of many artists.

JI: What’s next for you?

MA: I live in both Burnaby and in Sointula on Malcolm Island. Development of contemporary dance, rural B.C. and social causes are beckoning. At 64, I still have a bit of “oomph” left to pursue.

MA: I’m honoured and thankful to have worked with so many excellent professional colleagues in the arts world and at the JCC in accomplishing the festival’s achievements, as well as working with some wonderful volunteers. However, there are two volunteers in particular who I want to give a special thank you to. People with integrity and grace who have stuck by me and the festival from the very beginning – Harriet Wolfe and Lloyd Baron.”