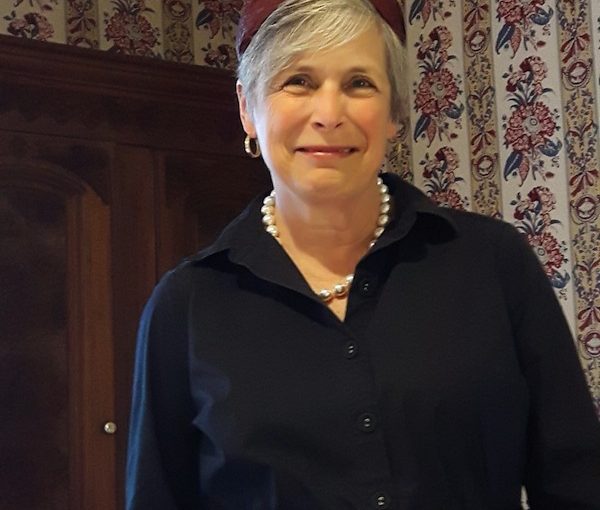 When Lynn Greenhough is officially installed as rabbi of Kolot Mayim Reform Temple in Victoria tonight, Sept. 6, she will bring with her a series of firsts to the city’s Jewish community: its first rabbi born on Vancouver Island, its first Canadian-born rabbi, its first full-time female rabbi with her own congregation and its first rabbi who was not born into Judaism.

A stalwart in Victoria’s Jewish life for nearly 30 years, Greenhough has been Kolot Mayim’s spiritual leader since 2017, while simultaneously completing her rabbinical studies at the program offered by the Jewish Spiritual Leaders Institute (JSLI) in New York.

For someone born and raised in Happy Valley – 15 kilometres west of Victoria – at a time when the area was still a farming community, the rabbinate was not a calling many in the community, or indeed on the Island, might have considered.

Her first taste of Judaism, and some of the recent history of the Jewish people, came in Grade 5, when she found a copy of William L. Shirer’s The Rise and Fall of the Third Reich in her schoolroom library, and her curiosity and sense of connection to Judaism ensued. She recognized that justice had tragically failed Jews during the Holocaust and she felt a need to be part of rebuilding a world where such a failure could never happen again.

“I consciously gravitated towards Judaism because of its inherent sense of justice,” Greenhough told the Independent. “At that early point, I realized, I would be a Jew.”

Life, jobs and family followed. She finished school, married and had a son, helped open Everywoman’s Books in Victoria and then worked for Canada Post as a truck driver for 20 years.

In the 1980s, Greenhough attended a few Jewish events at Victoria’s Congregation Emanu-El. She began to light candles and tried to build a sense of Shabbat into her week. She also looked for a Jewish partner who could help her build a Jewish home. Yet, it wasn’t until she was in her late 30s that she was determined – accompanied by now-husband Aaron Devor – to convert. Devor grew up in a Jewish neighbourhood on Long Island, but was not a regular synagogue attendee. Along the way, the couple became deeply engaged in Jewish life.

By 1992, Greenhough’s conversion was complete and, from then, it was full-on immersion to the point where she became a leader and educator. At Emanu-El, she guided historical tours, joined the board of directors, led services, including chanting Haftarot and Torah, joined the Chevra Kadisha (Burial Society) and served as a funeral officiant.

In 1996, she served as an instructor at the synagogue’s Hebrew school and then began teaching and coordinating b’nai mitzvah classes. In 1998, she began to teach Torah and Haftorah studies for adults and, in 1999, taught an introduction to Judaism course for those interested in conversion.

However, it was the Chevra Kadisha that became her passion. In 2000, Greenhough completed her master’s degree at Royal Roads University under the supervision of Dr. Rabbi Neil Gillman, z”l, from the Jewish Theological Seminary in New York. Her thesis – We Do the Best We Can: Chevra Kadisha in Small Jewish Communities in North America – looked at both the history of Jewish models for care of the dead, and present-day practices and training models from 16 different small Jewish communities.

This work led to further connections. Greenhough, along with Rena Boroditsky of Winnipeg, Man., and David Zinner of Maryland, worked together to organize the first of now 16 international conferences dedicated to learning about these burial practices.

Greenhough has also taught Judaism in the University of Victoria’s religious studies program (2007-09), was scholar-in-residence at Temple Beth Shalom in Phoenix, Ariz. (2009) and taught courses in academic writing at Royal Roads (2012-16).

In 2014, she joined Kolot Mayim as a member and led Torah studies and Shabbat and holiday services as needed, before becoming its spiritual leader in September 2017. Synagogue members are glowing in their praise of Greenhough as their choice.

“She brings a richness of experience as a born and raised ‘Island Girl.’ Indeed, she has attracted, and continues to attract, new members through her wisdom, spirituality, empathy, knowledge and quirky sense of humour,” said Sharon Shalinsky, president of Kolot Mayim.

Kolot Mayim was founded in 1998 by a small group of individuals and families, initially meeting monthly at the Victoria Jewish Community Centre. As the congregation grew, the frequency of services increased, ultimately to a weekly schedule. The synagogue has struggled to find a permanent rabbi and has, at times, been challenged in terms of membership recruitment and retention. The past year, though, it has seen a 70% increase in membership.

To mark the installation of a new rabbi at its westernmost location, Dr. Pekka Sinervo, the head of the Canadian Council of Reform Judaism, will be on hand at the ceremony, as will Rabbi Allan Finkel, who, along with Greenhough, is a 2019 graduate of the JSLI program and now leads services at Temple Shalom in Winnipeg.

Ahead of the occasion, Greenhough reflected, “This was not a career move, but the fulfilment of a dream.”