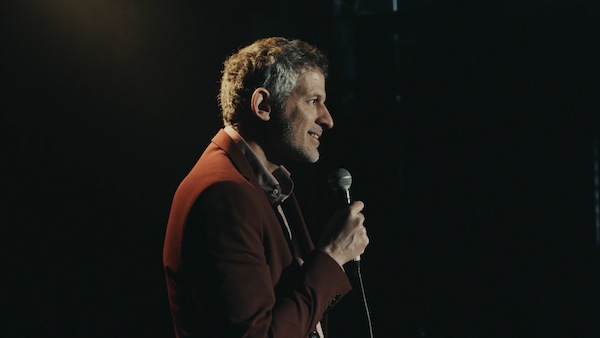 The character of Guy Nehama, played by Reshef Levi, dreams of becoming a standup comic. (photo from Topic)

It took me a couple of episodes, but then I was hooked. Initially, most of the characters on the award-winning Israeli show Nehama – in particular the lead, Guy Nehama, played by Reshef Levi – are completely unappealing, even annoying. While they more or less stay that way, they do start to show shades of competence and compassion, and begin to use humour to salve as often as to stab. But, most importantly, their intrigues, become, well, intriguing, and more plentiful.

The series starts dramatically, to say the least. Guy’s wife careens off the road, the car rolls (if I’m remembering correctly – so much has happened since then). She manages to get out of the vehicle but doesn’t make it far, though she does manage to make a short phone call. Since it’s the starting point of everything and the main plot, it’s not too much of a spoiler to share that she dies, leaving Guy with their five children, ranging in age from baby to high schooler.

A tech guru working for a beast of a man, Guy – as he repeats often – is the household’s sole breadwinner. Before his wife’s death, he had little or no time for parenting. After she dies, he has no choice but to change his attitude and his approach. It’s difficult, though, not just because of his own self-absorption, but because of the people around him and their pressures and secrets.

Overarching all this is Guy’s dream of becoming a standup comic. He had been the more talented half of a comedy duo and the fact that his partner went on to become famous, while he became his family’s breadwinner in a “real” job, frustrates Guy to no end. In the first couple of episodes, where we don’t see Guy perform, it is hard to believe that this whiny, lacklustre man who constantly dictates ridiculous stories into a recorder could be funny, but turns out he is, which, combined with him trying to do right by his kids, makes him an underdog to root for, as he discovers his wife had lied to him on more than one account – and others, including his children, continue to lie to him.

There are 10 episodes in the first season of Nehama. The acting is superb, the comedy is dark; the hour-long shows go quickly. Topic, a streaming service launched last year by First Look Media, can be accessed on topic.com, AppleTV, Android, Roku, Amazon Prime and elsewhere.

The other night, I sat on the couch with my husband in an attempt at togetherness. We watched an episode of Madam Secretary. It was our second attempt. On the first try, worn out, I was about to fall asleep when my spouse suggested that we save it for another time so I could go to bed. It was, he pointed out, supposed to be fun. Sticking to the initial “date time” wasn’t working. Thank goodness for the PVR.

The show we watched was full of allusions to knitting and design, which are parts of my freelance work. I cringed inwardly, preparing for derogatory comments about “women’s work.” To my surprise, the textile theme was respectful. A man with PTSD takes up knitting as part of his therapy – it helps him focus his mind. A first-year university student struggles with a design assignment – she comes away with a couture dress, but not before we hear the sounds of her sewing machine at work in the background. Best yet, when her sister begins to panic at modeling the dress, the student gives her a pep talk, saying, “Pull yourself together, be strong. Do this, I need you.” What started as a frivolous thing – “help me out at this fashion show” – became more. It became a chance to succeed academically, and to use inner strength to prevail over a trying situation. The episode showed strong women and struggling men seeking to be their best selves.

All this came to mind later, in the context of a Talmud class. I signed up for a Jewish Theological Seminary online course. With the wonders of technology, I can hear lectures by Rabbi Dr. Judith Hauptman, who is a gifted teacher and intellect. Her course has an interesting premise – looking at situations when “law meets life.”

She began with basic information, and got started studying talmudic text. Whenever I study Talmud (or any older text), I have to remember the inherent inequalities. Women were seen as subservient, with less agency than we think is appropriate today. Through careful reading, we saw lists of tasks wives are obligated to perform for their husbands (Bavli Ketubot 61a) and a discussion about how one might “wash” – sprinkle water on – a floor on Shabbat (Bavli Shabbat 95a). (This last reference was not cleaning so much as providing a form of air conditioning and reducing dust on an extremely hot Shabbat in Babylonia.)

Hauptman showed us how women’s interpretations allowed them both to obey the spirit of Jewish law, and to accomplish what needed to be done. In more than one place in these readings, the rabbis (all male) allude to the fact that women were smart and had power or agency. Even if the language of the Talmud relegates women to being “property of a man’s house,” the women in these stories shine through as being shrewd and savvy.

We think sometimes that our lives are infinitely more complicated, sophisticated and detailed than those in the nostalgic past. Yet, these talmudic texts reminded me that, more than 1,500 years ago, smart people focused on the details that make our households and lives function. We may have a way to record entertainment now (and a TV!) or access to machine-produced clothing, but our fundamental concerns are similar. How are we to balance the spirit of our commitments with the laws’ requirements? What is the intention of our roles? How do men and women balance and subvert traditional roles in order to cope? How do our household tasks make life comfortable and/or meaningful?

The first text we studied refers to tasks that wives perform for their husbands: grinding grain, baking bread, doing the laundry, cooking, nursing his babies, making his bed, and working with wool. When she has wealth and servants, she can avoid some of these household obligations. As we studied this text together, I was knitting a wool sweater I’d promised to finish for one of my kids. I thought the webcam was trained up, only on my face. No, as it turned out – a friend, also taking the class, in New York, said she could see my knitting.

That’s OK. In the end, the more things change, the more they stay the same. Regardless of your level of observance, we still wrestle with these issues. Women often interpret Jewish law and tradition when it comes to household details. If one doesn’t have enough servants or financial resources, or even enjoys knitting and finds it focuses the mind, one might still be working with wool.

A recent study indicated that, in Reform Jewish congregations, rabbis who are women are paid less than their male counterparts. Women have fewer positions “at the top” as senior or sole congregational rabbis. We continue, even in the most progressive Jewish movements, to struggle with pay equity and gender roles.

The Talmud is an essential part of Jewish oral law, but it’s also literature, with narratives that shed light on daily life. A current TV show portrays a woman as U.S. Secretary of State, and shows that interaction with fibre arts is still an important, useful and viable thing to devote time to creating, no matter your gender.

In both the show’s legal negotiations and this talmudic text, we’re taught that, sometimes, the spirit of the law, the intention, is more important than the letter of the law. Through all the big decisions, it’s sometimes the small household details that make people’s lives rich. I’ll keep knitting handmade sweaters for my kids – and studying Talmud. Even in these times, there’s a place for both.

Joanne Seiff writes regularly for CBC Manitoba and various Jewish publications. She is the author of three books, including From the Outside In: Jewish Post Columns 2015-2016, a collection of essays available for digital download or as a paperback from Amazon. See more about her at joanneseiff.blogspot.com.