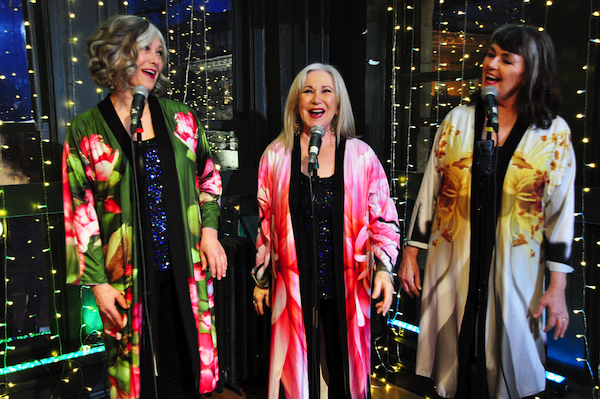 The Hot Mammas are busy this holiday season – and year round. With three albums to their credit, they perform at venues ranging from jazz clubs to shopping malls. Readers can next see them at Robson Square Skating Rink on Dec. 15, and then at Water Street Café Dec. 18.

One of the holiday songs the group performs is “Mamma Julie’s Hanukkah Song,” so dubbed by Georgina Arntzen and Mary Ella Young because the third member of the Hot Mammas, Julie Brown, wrote it, and “too many songs are called ‘The Hanukkah Song’ or ‘Festival of Lights.’” (A video of it can be found via facebook.com/thehotmammas.)

Brown’s Jewish heritage is Ashkenazi. “My maternal grandfather, who I’m named after (Julius Cohen), was a rabbi,” she told the Independent. “My father always followed our traditions. My mother was a phenomenal cook and it’s because of her I’m able to make latkes, matzo balls, knishes, chicken soup, etc. When she didn’t want me to understand something she and her sisters were talking about over the phone, she’d suddenly switch from English to Yiddish. That’s where and how I picked up some fun expressions, which I use to this day.”

Born and raised in Montreal, Brown said she has been performing music since she could walk.

“My older, late, great brother Martin Overland was the founding member of the Canadian folk group the Raftsmen,” she said. “Your readers may recall the song ‘Something to Sing About,’ which was one of their hits. Martin had perfect pitch and the voice of an angel. He was also a terrific guitarist and accordionist. Eleven years my senior, we would sing together in harmony when I was a very young child. I still recall performing ‘Buttons and Bows’ in front of a roomful of relatives and friends.

“When the opportunity arose as a 10-year-old to actually sing on camera, I jumped at the chance. The Montreal kids show was called Small Fry Frolics and there I was with my cousin Shirley singing the Everly Brothers’ ‘Bye Bye Love’! At 15, I joined a rock band, while singing lead as Carmen in high school.

“The singing/performing didn’t stop at teacher’s college either,” she added. “McGill’s Macdonald College offered a two-year teaching diploma program at the time and, much to my delight, also had yearly talent shows.”

During her teaching days, Brown brought her ukulele to class. “The kids were as crazy about the Beatles as I was and we sang our buttinsky’s off to start the day,” she said.

While at university, Brown performed in stage plays and film. She recalled working on a movie directed by John Huston, which featured Sophia Loren – “and I was fortunate enough to garner a wee speaking role when Ms. Loren walked over to a table of background performers of which I was one, and asked me a question. I wasn’t supposed to answer her as a silent on-camera person but spontaneously blurted out a comment because I didn’t want to be rude. (Out of my peripheral vision, I noticed John Huston smacking his forehead.) And that was how I got my first ACTRA permit! Even after moving out to Vancouver and doing radio full time, I still continued to audition for film, TV and did a lot of voice work. In fact, I was the Telus voice for nearly 15 years – ‘We’re sorry, the number you have dialed is not in order. Please hang up and try your call again. Thank you, from Telus.’ That was me and one of 40 or so prompts I did for them.”

Brown left Montreal after the Front de libération du Québec “raised its ugly head in Quebec” and the Parti Québécois was in power.

“My child came home in tears from school with a notice that all English-speaking children had to be educated in French the following year,” she explained. “French didn’t come easy to my son but it was more than that. We lived in Canada, or so I thought. Stop signs had Nazi slogans scrawled across them. Shop windows in the English and Jewish communities were smashed and vandalized. An elderly Jewish woman who couldn’t speak French and wanted to order flowers for a friend was disgustingly treated over the phone because she was trying to place her order in English. The clerk hung up on her.

“As a teaching friend once said to me, if you say, ‘ich bin a Yid,’ you get it from both sides. I still don’t think the rest of Canada realized just how dangerous and revolting that regime was. Well, I did…. We came out to Vancouver for a visit and, with tears in his eyes, my son asked if we could move. And we did just that in 1978.”

Within a week, Brown got a job as a news broadcaster at CFMI, the sister station to CKNW.

“Not long after that, the program director allowed me to develop an interview show as well. I had been doing interviews at the Montreal radio station, along with news, so this was a huge relief to me. I love people and am a naturally curious person, so interviewing was, and still is, a good fit.  My radio career blossomed here in Vancouver. Eventually, I co-wrote, co-produced and co-hosted Vancouver at Noon on KISS-FM for 11 years.”

For Brown, singing in choirs has always fed her soul, and it was in one of those choirs she met Arntzen and in another that they met Young. The Hot Mammas have been together now for 11 years.

“They are both family to me – my sisters,” said Brown. “All three of us love performing because we give to our audiences and they give back. Something magical and marvelous happens, no matter where we are or how many or how few people are in that audience. Synergy. Energy. Love. Music heals. It is the ‘universal language.’

“We sing songs we love. That’s how we choose our repertoire. Jazz, pop, rock ’n’ roll, folk, show tunes, you name it. We don’t just cover groups. We also write originals. In fact, one of our tunes is called ‘The Hot Mammas’ Song,’ and it’s quite amusing – all about being mothers who love their kids but have ‘traded in their aprons for a microphone.’”