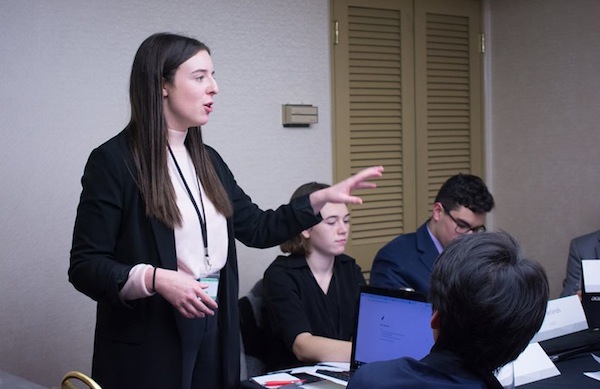 Yael Steinberg, left, and Zina Rakhamilova at Israel on Campus’ first event of the year at the University of British Columbia. (photo by Zach Sagorin)

“Often Jewish students on university campuses struggle to express any kind of pro-Israel sentiment. They are intimidated to do so and they don’t have the tools to articulate or engage in productive conversations,” said Ariella Karmel, president of Israel on Campus (IOC) at the University of British Columbia.

Karmel spoke to the Independent after the closing of the IOC’s first event of the year, called Israel Unlimited: Exploring Israel at UBC. Held on Oct. 29, its purpose was to teach effective communication skills and ways to address anti-Israel bias. It was led at Hillel BC by Zina Rakhamilova, StandWithUs Canadian campus coordinator, and Yael Steinberg, Hasbara Fellowships’ West Coast director.

“IOC is a student-run group … relating to Israeli culture, media, food, and we are also a pro-Israel group,” explained Karmel to the approximately 25 attendees. She said the club gives “a platform to engage with Israel” and is a resource for students who want to learn more about Israel.

With the exception of BDS (boycott, divestment and sanction) last year, Steinberg said anti-Israel propaganda on campus is minimal. However, she said, “When situations go down in Israel it becomes a lot more stressful on campus for those Jewish students, who somehow are held accountable for every action the state of Israel might possibly have ever done.… By virtue of Israel being the Jewish state, being a Jewish student means that you are the representative for that.”

Screened at the event was the film Crossing the Line, which, Steinberg explained, “is about when anti-Israel propaganda gets out of hand and crosses into the realm of antisemitism, which even though you may not see huge amounts of it at UBC … this can spring up in a moment’s notice.”

The short film emphasized hasbara (public relations), efforts to spread positive information about Israel, to stand up for Judaism and Israel: “A Jewish person not secure enough in their Jewish identity and [who] doesn’t know enough about Judaism, about Zionism, about Israel is going to be much more exposed, much more vulnerable.”

Rakhamilova warned, “Just because your campus climate is quiet for the most part, apathetic, doesn’t mean necessarily you shouldn’t do any sort of Israel engagement or Israel education because universities … across the country are dealing with BDS and are dealing with anti-Israel activity…. You are not immune to that kind of stuff…. It means you need to find a way to showcase a positive association with Israel.”

Rakhamilova suggested holding events on topics such as Magen David Adom or Israeli humanitarian aid, as a means of “nipping” anti-Israel activity “in the bud before it hits campus,” and “not only being reactive.”

“There are situations when people are allowed to be legitimately critical about Israel,” she stressed, “but there is a distinction between being fair about Israel and when it becomes antisemitic.”

The line between the two can be measured, she said, by the three Ds: demonization, delegitimization and double standard. “That’s how you can pinpoint when this is no longer legitimate criticism of Israel.”

As an example, Rakhamilova offered a chant from the Students for Justice in Palestine: “From the river to the sea, Palestine will be free” – this is delegitimization, she explained, as it is “indicating from the Jordan River to the Mediterranean Sea, so that entire land is Palestine and not Israel.

So, claiming [that] the Jewish people, unique among all national or ethnic groups, have no claim to sovereignty.”

Rakhamilova described the BDS movement as encompassing all three Ds, noting particularly its emphasis only on Israel, and ignoring any other body bringing harm to the Palestinians, as well as ignoring all of the contextual information. “And a lot of the imagery can be looked at to be demonizing towards Israel,” she said.

“What are the real issues? Occupation, excessive force, racism?” Steinberg asked. In addressing any of these issues, she said, “Each anti-Israel message has a corollary pro-Israel message.” Regarding excessive force, for example, “the Israeli government sent the IDF in with foot soldiers to Gaza to eradicate different terrorist cells when they could have sent the air force and turned Gaza into a parking lot because Israel values human life so much and they were trying to protect civilian casualties.”

Rakhamilova gave another example: the assertion that Israel is an apartheid state. “Apartheid is a system of racial subjugation to benefit one race over the other,” she said. “Does that happen in Israel? Do Arab Israelis have the same human rights as Jews in Israel? … Arab Israelis have equal rights in Israel.” She recommended including the message: “Until the Palestinians can accept the right for a Jewish state to exist, peace will be elusive. Peace can only come through mutual recognition and respect.”

In response to a question about how pro-Israel students should handle Jewish students who support BDS in the name of social justice and human rights, Rakhamilova said, “Just because you are Jewish doesn’t mean what you are saying is any less antisemitic,” and whether the criticisms are antisemitic or not can be gauged using the three Ds.

A member of the Jewish Defence League (JDL) asked how to respond to an event such as the one held by the Progressive Jewish Alliance, who hosted Israeli conscientious objector Yonatan Shapira on campus on Nov. 3. Some 125 people attended that event, including about eight protesters.

Rakhamilova began to respond, “When you come in and you look like you are demonstrating against someone’s right to speak….”

“We are demonstrating against their spreading antisemitism and anti-Israel propaganda on campus,” interrupted the JDL member, adding, “We are just giving a positive message.”

Steinberg suggested “not giving the event more publicity,” to which the JDL member countered, “We need to address it.”

Steinberg responded, “When we spoke about going rogue against the Jewish community….” The JDL member interrupted again, saying, “Ignoring it will not make it go away.”

Steinberg said, “By virtue of being a minority, one represents the whole and that’s unfortunate, and it sucks, and that’s racist, and it’s awful, but that’s the way this works. We have no choice but to work together … to figure out the best way to handle anti-Israel activity on campus.”

When asked for alternatives to demonstration, Steinberg suggested writing an op-ed after the fact, “so you can control the messaging,” working with the administration, or sending students to take notes of what has been said to use in the future.

Rakhamilova noted that Hillel or the IOC could take action. “They never do,” contended the JDL member.

The event wrapped up soon afterward. Karmel described it as having been “really productive” and “helpful in improving” the ability of students to effectively communicate pro-Israel sentiments.